That came back to bite him in his ass 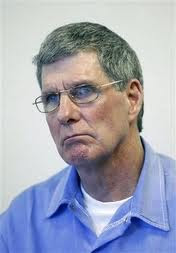 
Summoning Shea's memory during the parole hearing, Sequeira acknowledged that in 1970 there was only enough evidence to charge Manson and cult members Steve Grogan and Bruce Davis with Shea's killing and decapitation ; but the prosecutor added the subsequent investigations suggest that Watson was part of the four man hit team that carried out the execution telling the Commissioners "Inmate Watson certainly had knowledge of this crime and the whereabouts of Mr. Shea's body for years." Once he was convicted of the other murders, he was certainly in a position to help, and yet he did nothing to assist law enforcement in finding Mr. Shea's body."

Shorty Shea's skeletal remains were located in 1977 on a steep grassy gully off the Santa Susana Pass. It was Clem Grogan who finally leadauthorities to the murder site. The discovery was made without the help of Charles Watson-and it was made some three years after Watson claimed to devoted his life to Christianity.
"If he truly had remorse," Sequeira observed "why has he never come forward to tell law enforcement about this and other crimes, committed by the Manson Family? That doesn't strike me as remorseful."

Thanks to a friend for the article.

Maybe I'm a tad behind, but did anyone ever testify as to how they managed to sucker Shea into the car with them in the first place? I saw Davis' testimony on Youtube, but it's truncanted and doesn't give his full account. Between his and Grogan's testimony I'm sure we can get a pretty clear idea of what happened there from A to Z. Anyone know where this might be found? Thanks!!

I think it was said they lured him into that under the assumption they need to pick up some car parts.Then in car Grogan hit shorty from behind with a pipe and Tex Watson sitting on the passagers seath started to stabbing himi think tihs is what Bruce said.

Hi guys I am new here I like to read your posts. So I finally decided I will post I am sorry for the mistakes I made in previous post I was rushing and I am sorry if someone will have problem with my english I am not from USA or UK So my vocabulary isn't so big to fully express myself.Thank you and wish you nice day.

Surf, the Col has a bunch of Clem's parole hearing transcript. Here's a link

It is interesting thinking about the 'Christianity' of Watson, Davis and others as it relates to being totally forthcoming about the past.
But then we have over 4,000 Catholic priests charged with sick acts since 1993, and all those bastards got up on the alter and "preached God's word".
So 'christian hypocricy' isn't uncommon to say the least.
Supposedly a bunch of the girls knew of the murder and even participated in the burial. You'd think the born-again Gypsy or such would come clean.
Then again, it might be as simple as fear trumps faith. Would somebody today be justified in fearing Manson or whoever is his followers these days?

I dont believe any of the current practicioners of ATWA care much about the events of 1969. It doesn't come up much at all on the ATWA oriented sites or FB pages.

Hiya , I'm a wee bit confused ... Every article and book I have read on Manson state that he was never charged with murder, but conspiracy to murder. Was he actually charged with the murder of Shorty and if so ,what was the outcome ?

Hiya , I'm a wee bit confused ... Every article and book I have read on Manson state that he was never charged with murder, but conspiracy to murder. Was he actually charged with the murder of Shorty and if so ,what was the outcome ?

Manson was convicted of murder in both the Hinman & Shea cases. I believe the trial was in 1971.

Shak El said...
I dont believe any of the current practicioners of ATWA care much about the events of 1969. It doesn't come up much at all on the ATWA oriented sites or FB pages.

Thats because maybe they all defending Manson....and then it maybe is safer not to get those events in the spotlichts too much. You know how most of em talk/think...Charlie is innocent,He never killed annyone, Charlie had an unfair trail, He wasnt allowed to defend himself, Charlie wasnt alowed to talk, Charlie had to take a lawyer He didnt wanted to, He didnt get to choose this,He didnt get this,didnt have that..and so on and so on.... To my opinion Manson DID had his sayings in the begin fase of the trails, but he putted on a circus with loads of MumBo Jumbo Manson riddles, well...He did fuck up Himself I guess.....
And to come back at the Shea murder..They ALL kept their mouth shut a long time,then only gave strategic Bits and Pieces, Only Clem coorporated, and in return got his Freedom.
A lil ,,ATWA-Talk,, about Manson and 1969 events&trails

Yes Vikess is correct on the luring of Shorty. Welcome Vikess!!

Off topic kind of but-Even though we are not Pro Manson here, we always make sure to post anything they have to sell or any current information they provide us to share. Yes we can all get along!!

Besides Tex and Charlie, Bill Vance and, I believe Little Larry were also involved in Shorty's killing.

LIZ- If they were then wouldn't Clem have implicated them when he was trying to strike the deal that got him free? Just curious...

From one of Bruce Davis' parole hearings:

"I was in the car when Steve Grogan hit Shorty with the pipe wrench. Charles Watson stabbed him. I was in the backseat with...with Grogan. They took Shorty out. They had to go down the hill to a place. I stayed in the car for quite a while but what...then I went down the hill later on and that's when I cut Shorty on the shoulder with the knife, after he was...well, I don't know...I...I don't know if he was dead or not. He didn't bleed when I cut him on the shoulder."

"When I showed up, you know, he was...he was incapacitated. I don't know if...you asked if he was unconscious, I don't know. He may or may not have been. He didn't seem conscious. He wasn't moving or saying anything. And it started off Manson handed me a machete as if I was supposed to...I mean I know what he wanted. But you know I couldn't do that. And I...in fact I did touch Shorty Shea with a machete on the back of his neck, didn't break the skin. I mean I just couldn't do it. And then I threw the knife..and he handed me a bayonet and it...I just reached over and...I don't know which side it was on but I cut him right about here on the shoulder just with the tip of the blade. Sort of like saying 'Are you satisfied, Charlie?'.

"And I turned around and walked away. And I...I was sick for about two or three days. I mean I couldn't even think about what I...what I had done."

It was always thought that Shorty had been tortured to death. Sounds like he was unconscious or knocked silly enough to where he probably didn't wasn't able to feel the fatal stab wounds.

Still, some pretty sick and disturbing stuff. Makes you want to face down the Reverend Watson and ask him why he hasn't confessed. Or perhaps his parole is more important than his soul?

I wonder what kind of response is given via mail or on Watson's website when the subject of his involvement in the Shea murder is broached? Does he answer? Deny?