A Who's Who of The Manson Family 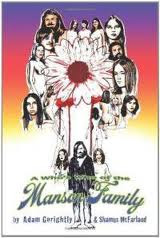 
Adam Gorightly's "A Who's Who of the Manson Family." Along with being one of the Eviliz close knit Family, Adam has been voted "Eviliz's Sexiest Freaky Deaky Man" thirteen years in a row. Matt on the other hand has only made that list 10 years in a row.
Adam's newest Manson book is a great reference tool.
I found it to be more then just the title suggests. It contains updates on what some of your favorite Family members have been doing through out the years. Things even Eviliz did not know. For example -did you know that Bill Nelson before he died was co-authoring Barbara Hoyt's memoirs?
Also enjoyable are the accompanying photos some of which I have never seen before. The "Who's Who of the Manson Family" is a must for your collection.
From Adam's book-
Stephanie Gale Rowe-
A.K.A Suzanne Scott, Barbara Junior
D.OB 3/23/50 P.O.B- Los Angeles
An early member of the Family.
Again not much is known about Stephanie Rowe.
If anyone had any recent info on her, Adam would be the one.
To purchase Adam's "A Who's Who of the Manson Family" go to-
http://www.amazon.com/Whos-Who-Manson-Family/dp/1456585010/ref=sr_1_1?ie=UTF8&qid=1329282672&sr=8-1
Last I checked, you could purchase a brand new copy for the reasonable amount of $15.25. Or $6.75 for Kindle.
Also check out Adam's first Manson book "The Shadow Over Santa Susana:Black Magic, Mind Control And "The Manson Family Mythos". Another gotta have it book for your bookcase. Since Eviliz sucks at doing book reviews, we are currently looking for one of our members to provide a review of "The Shadow Over Santa Susana". If you are interested drop us an e-mail.
1967MansonFamily@gmail.com

I read Shadow over Santa Susanna Pass...but it was a few years ago. I remember liking it a lot.

Nelson and Hoyt had a falling out. That's what he told me. He abandoned the book idea. I have some of the interview tapes.

Just ordered Shadows over Santa Susana at local book store. Thursday arrival reviews I've seen must read for anyone into MANSON.
Supposed to be better then Ed Sanders The Family. I Have 1st edition gift from my Baby.
Would like to know what you Guys thought of Six degrees of Helter Smelter. I loved it being a Jersey boy not one the lucky ones who live in L.A. that can actually go see the places. Would like info from those in the know about exploration of Spahn Ranch Property. Would love emails from anyone who likes all this thanx ajerseydevil@gmail.com