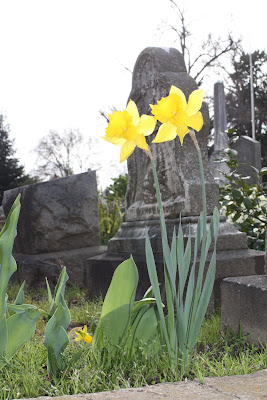 Just as Farf had described, the headstone we were looking for was very near the intersection of Ninth St. and Broadway. What may have once been a quiet final resting place is now a noisy 44 acres flanked by a freeway, a housing project and a Target retail location (formerly a semi professional baseball park). There is also this breathtakingly lovely view of the world-famous Sacramento skyline for the deceased to marvel at: 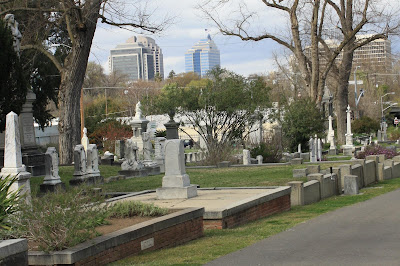 Also as Farf described, Mr. and Mrs. Heintz are interred with the Deweys in the plot marked B83 276: 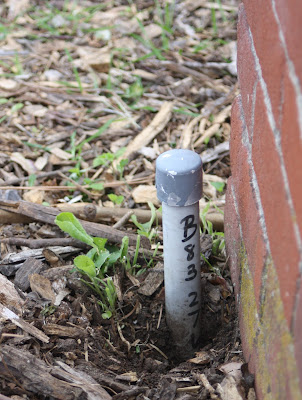 So, everything is going as expected when Patty realizes that "Mother" and "Father" have been slabbed over from what is visible in the original photo of Red and Blue with which Farf started this whole thing: 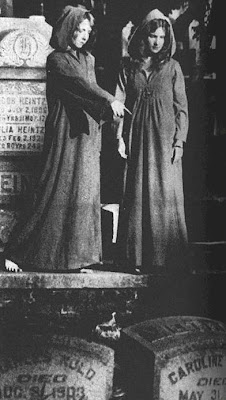 Go ahead, zoom in. Don't be shy. You will also see that Mother and Father have switched places from left to right! Whoa. Talk about "rolling in their graves." 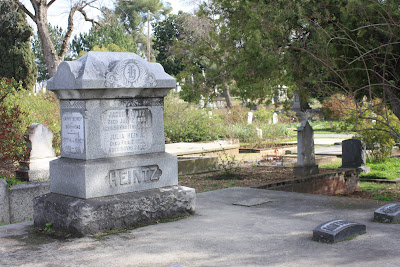 The only possible explanation Patty has is that because parts of the graveyard fell into a state of disrepair upon an ever eroding hill, Mom and Dad's headstones fell over and were replaced by volunteers who got it wrong before pouring the terrace meant to shore up the Heintz plot for the next hundred years or so.

What were Red and Blue pointing to? We may never know for sure... 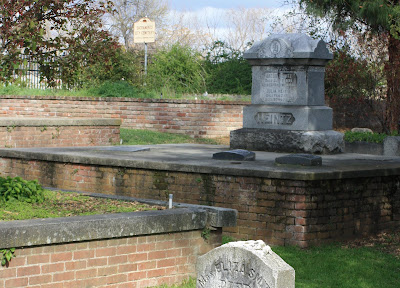 Wow Patty, I am realy impressed that you realy visited Sacremento, with this quest...shows how/when strings are pulled in this whole Manson matter..Verry nice research Patty, I wish I could have joined you with that trip....but I dont have Air-Miles enough..!!! Takes another 10years at my local SuperMarket...

PS Liz: Graveyards do not get Patty hot. Sorry, no good stories to tell.

Oh yeah, Amsterdam. Early 1992: You could get hash, speed, acid, or smack on the street with a whisper, but try and find a bottle of Jaegermeister anywhere...anywhere! Patty couldn't.

There was, however, what was left of a very strong eighth of weed she wanted to take home. She wrapped it tightly in plastic several times and dropped it into a bottle of Lubriderm for safekeeping. Eight hours later, her entire suitcase smelled like a Humboldt backroad on a sunny day.

The lotion and its contents were, needless to say, ditched before Rotterdam.

Farflung writes: "Hello Panamint Patty, what great photography of the Sacramento City Cemetery and of the very headstone in the Red and Blue, graveyard image. That is wonderfully dedicated and artful work.

I may have a solution to the mystery of the ‘MOTHER’ headstone from the photo. The headstone in the concrete has enough elevation to expose some of the stonecutter’s work within the margin of the one marked Mother.

The text I could decipher was Caroline and May 31 from the Mother headstone. It turns out this is not a member of the Heintz /Dewey clan but the Nold family. There was a Caroline Nold who died on 31 May and has ‘Mother’ inscribed on her headstone but she is buried at plot B83 273 instead of 276 which is the Dewey plot. Additionally the grave to ‘Mothers’ left matches Charles Nold who died August of 1903 and has ‘Son’ inscribed on his headstone according to the cemetery record. The ‘switched’ headstones would not have been Mother and Father but Mother and Son. I say this like I know what the hell I’m talking about; which I don’t.

I’m now assuming an illusion created by a differing perspective. Squeaky is standing on the edge of the concrete (less than a foot? Orange line) and her bare footed, 5’ and a few inch frame appears to be slightly taller than the Heintz headstone. This seems odd to me since the headstone is likely shorter than Squeaky by perhaps six inches to a foot. So now I’m confused and not a photographer who knows how to manipulate focal depth or anything else.

So I think some brave person may have to return to the cemetery and try to align a few points. If the headstone of Charles Nold is still in existence, then the apex of his marker could be aligned with the top of the Heinz monument to serve as the rough location where the original photo was taken (marked in blue). A person could stand at the edge of the concrete with a tape measure extended to 5’ 4” (a precise Squeaky-tude), as a way to offer some perspective of a Squeaky ‘stand in’ and then figure what camera settings caused the effect in the old photo. Or this may be the latest ‘Mystery Spot’ accidentally discovered by Panamint Patty and entourage, in which case everybody wins.

When she approached the Heintz headstone, she immediatley thought to herself, "Something is different." That is, Patty is 5' 4" tall just like Lynette, and found herself much taller than the top of the Heintz memorial. In the black and while photo which you forwarded, the name "Heintz" comes to mid-thigh on Lynette. On Patty however, it was maybe knee high. This leads Patty to believe that the original monument was poured over: a new slab was terraced over the old one on which The Squeak is standing in your photo. She is standing on brick in the 1970's: today it's just the slab. Interesting, no?

BTW Farf, you should get an ID and comment on here, whatcha think about that?

From the TIME Magazine article “The Girl Who Almost Killed Ford”, 15 Sept 1975.

A tiny bit of information about the cemetery photo and why it may be difficult to source:

“Squeaky Fromme was also accustomed to using the language of violence. Good was with her in late July when she told a journalist−who insists upon anonymity−that Ford, the creation of Nixon, "would have to pay for what he's doing. Ford is picking up in Nixon's footsteps and he is just as bad." Part of the interview took place in a local cemetery because the girls said they "identified" with the dead. When the newsman asked for more time to talk, Fromme said darkly, "This is nothing to the interview you will get. Something very big is going to happen."

It was possibly taken in late July, about six weeks before the assassination attempt and two weeks after liberating the gun from Harold Boro.

Unlike the courtroom photos this one could have the benefit of staging with some artistic license added. I had assumed the photo was taken at night because that is the feeling I took from a quick glance at a black and white image in a graveyard. That is likely influenced by my bias that cemeteries are typically visited at night by robed individuals in horror films.

Now for some technical stuff, the image is tightly cropped on the sides making the headstones in the fore and background, the only references besides the two tiny nuns. There is a distinct shadow cast upon Lynette’s mid drift which is likely from the sun versus a flash or other artificial lighting. As Panamint Patty directly observed, the Heintz monument is not nearly as tall as Squeaky, which the image falsely indicates.

Here’s an article about focal length and the associated effects:

If Red and Blue were closer to the monument, before the concrete work was completed, I would assume that Squeaky’s shadow would have covered the Heintz monument the way her hand casts a shadow over her belly. But neither of the girl’s shadows appears to reach this headstone. I’m assuming this is because they are standing near the edge of the concrete work Panamint Patty photographed. Again, I’m not a photographer and choose to believe the effects are caused by elves and gnomes.

It’s hard to believe this may be the only purposeful trip to photograph this headstone in association with Squeaky and Sandra after 36 years. Several exist of their apartment and the Stockton house but the cemetery has avoided the extra attention.

The headstones in the foreground are from the Nold family who are interred in a different ‘family plot’. The map of section 83 indicates 15 separate plots arranged in a 3 by 5 rectangle. Checking the Bing aerial image of the cemetery still shows 15 distinct plots in this section making it less likely that the Nold headstones were joined in the Heintz section. Not knowing if the Nold headstones are still in existence makes this nothing but guessing on my part.

What say you Panamint Patty?

Patty says welcome to the blog, Farf. Glad to see you online.

Also, she will have to go back and get more photos for you since you are very dedicated to this topic and since Patty respects that a lot.

This is my first attempt to post on this blog, thanx for the pic of "Clem"!!

This is my first attempt to post, thanx for the pic of "Clem"!!

In these days the US media attention went down so the two girls were happy that the German yellow tab "Neue Revue" was eager to take photos of them as nuns on graves.