This Day in Manson History - The Buntline is Stolen 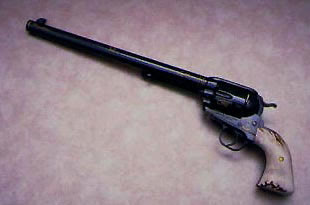 March 21, 1969 The gun (.22 caliber Hi Standard Longhorn revolver, serial number 1902708) used by Tex Watson in the Tate murders was stolen from an archery shop called Archery Headquarters in El Monte, CA - possibly by someone named "Ron". This is the same weapon that before the Tate murders Charles Manson used to shoot drug dealer Bernard "Lotsapoppa" Crowe

Joseph Randall (Randy Starr), an employee at Spahn said he obtained the gun from Ron and later loaned it to Manson for target shooting.
Posted by Matt at 4:33:00 AM

That thing looks like a beast to carry. I have a S&W .38 hammerless snub nose. I can get it out of my bag quickly if I ever have to but even it is heavy to carry (at least to me).

I thought they had so many weapons that they needed Danny D to watch over them. If that was so then why send these kids out on a critical mission with BS equipment?

According to DeCarlo, Manson gave Danny's truck to Bill Vance in exchange for the gun.

I've read that Wyatt Earp used the long barrel of his Buntline Special to pistol whip a number of his advisories and that it's extended range allowed him an advantage in a shootout. Other places I've read that there is no evidence that Wyatt ever had a Bultline in the first place. It would be really interesting to see Wyatt's gun turn up.

When I was a kid my dad bought a double action Hi-Standard 9-shot revolver, it was nickel plated, (silver in color) with a barrel shorter than Watson's gun. I remember the box it came in, it said "Longhorn" in large letters across the top. I fired thousands of rounds through it, every Saturday .22 shells were 25 cents a box, I went shooting with my dad.

Dad had a relative with a Colt "Buntline Special". That gun appeared almost identical to Watson's gun, including barrel length.

I've been wondering for some time if Watson's gun was manufactured by Hi-Standard or by Colt? Colt pistols were probably a little better, but our Hi Standard worked perfectly for years. We had several Colt pistols, but only 1 Hi-Standard.

Suze Said...
I thought they had so many weapons that they needed Danny D to watch over them. If that was so then why send these kids out on a critical mission with BS equipment?

Good question. Maybe they brought it because it doesn't make much noise?

I'm not sure what weapons they had before the arrest, but they certainly had many weapons after the arrest. I've seen documentaries of Spahn with a number of long guns and knives handled by Fromme, Pitmann, Good etc.

Watson said in his book Manson told him to "use the knives whenever possible". It seems to me that each of the girls had a knife, plus Watson had a bayonet and the Longhorn revolver. For some reason Manson wanted them to start at Melcher's old house and basically cause a blood bath on Cielo Drive. When Watson returned to Spahn the first thing Manson asked him was "Why are you home so early?" As he walked away Manson asked him "Was it really Helter Skelter?"

Manson wanted a blood bath and he got it.

Can anyone point me to a photo of the knife found in the chair at Cielo Drive? Sadie lost a knife so it was probably hers.

Yes Suze, the long barrel on that thing makes it unwieldy to stick in your pants.Plus, it's a single action, which means you have to pull the hammer back and cock it before you can fire it, which takes time.

I still am puzzled how, if he was as high as people claim he was, Tex managed to climb a telephone pole and cut the wire, encounter Steven Parent and shoot him 3 times rapidly, knife him, push his car around, break into the main house and do all that mayhem, and everything after.

If I had taken the drugs he supposedly took that night, I would've had trouble chasing down a cricket to step on, and Parent's car probably would've scared me so bad, I would've passed out.

Tweakers never cease to amaze Patty. Crank is the Devil.

Can anyone point me to a photo of the knife found in the chair at Cielo Drive? Sadie lost a knife so it was probably hers.

There is photo of it, sticking out of the couch, in Helter Skelter.

"That was Ronnie Reagan's gun!"

GrumpFromPahrump said...
There is photo of it, sticking out of the couch, in Helter Skelter.

Thanks, Grump. I'll check it out.

Well, rfoster1, if you were the devil here to do the devil's business and were built physically like good ole Tex, you would be able to do all that.

Sorry folks, I inadvertently made that Lansbury post live. It wasn't meant to be. I need more coffee...

A word about good ole Tex. I was very familiar with Farmersville at the time of the killings. Fville like most small Texas towns idolize their star athletes who as a result have their choice of girls and a free ride in school. Forget the honor student bs, those grades were most likely given to him. It's not unusual for the chosen few to have difficulty adjusting when they enter the real world. Tex repaid his school by going back and stealing typewriters. This may not sound like much but to a school district like Fville a few typewriters are hard to come by.

The Buntline was not a "BS" weapon. It worked just fine, until Tex smashed 1 to many people in the head with it. Tex was not the smartest person in the world. He said the gun jammed? It isnt a easy thing to 'jam' a revolver. Using a .22 to murder someone is not the wisest choice. A higher caliber gun woulld do the job just fine. Also, Wyatt Earp, even though he did carry a buntline, it was not a .22, it was a .45 caliber.
Suze, try a glock 30, it is what I switched to, Even though it is a
.45 cal, because of the double spring it shoots like a .22. It is in Glocks compact line, if that is still to heavy, you should try their subcompact lines. Glocks are great guns with very little problems if any.

My apology as this is a few days late but I just noticed the post.

But in addition, this was also the date Manson was released from prison (Terminal Island)in 1967.

When he supposedly begged them to stay.

Just had to add that because I didn't want to wait a full year, lol.

Hi Brian, nice to see you.

@ Evil Liz.... Dont be so dissapointed...they wont let me carry one here too. Never...No More...
I always ask mijself why Tex had to shoot Steven Parent 4 times at close range/point blank. And after that knifed the poor Boy. I mean a waste of bullets, and he did not knew how much he needed inside...got my point ???