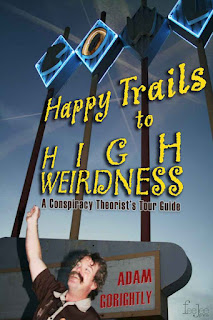 ATLANTA - Apr. 11, 2012 - FEEJEE PRESS (feejeepress.com) announced today the release of "Happy Trails to High Weirdness: A Conspiracy Theorist's Tour Guide," a precise roadmap to the People, Places, & Parapolitics that make up the scenery of bizarre destinations in & around California and the ever-odd Great Southwest weirdscape, by author and "crackpot historian" ADAM GORIGHTLY in traditional paperback and as an ebook for Amazon Kindle and Kindle app users.

Gorightly takes readers along for a wild and hilarious ride to out-and-out strange locations to meet up with some of the most interesting folks and figures involved in Conspiracy, UFOlogy, Occultism, Discordian Hijinks, Death Cults, and more. Gorightly's travels reveal a land of strange, beguiling and sometimes humorous wonders. From surfing with occult secret societies in Santa Cruz on through to the dry depths of the Manson Family and other cults of Death Valley to crashing with aliens and their fans in Roswell, NM, Gorightly has an uncanny knack for locating the weird, the wanton and the wacky.

"Happy Trails to High Weirdness: A Conspiracy Theorist's Tour Guide" is a must for readers who need to mix a little levity with their paranoia. Gorightly's infectious humor takes the edge off the more distressingly dark aspects of occult and conspiracy history and lore while affording readers a better understanding of the curious subject matters that makeup fringe and high weirdness culture. You can't go wrongly with Gorightly.

ABOUT ADAM GORIGHTLY
A certified "crackpot historian" and 23rd degree Discordian, Adam Gorightly has been chronicling fringe and conspiracy culture in an illuminating manner for over two decades. An active contributor to the 'zine revolution of the late '80s and early '90s, Gorightly's byline was a familiar sight in many cutting-edge magazines of the period where he sharpened his literary teeth. His articles have appeared in numerous publications such as "The Excluded Middle," "UFO Magazine," "Paranoia," "Steamshovel Press," and "FourTwoFour," the largest soccer magazine in Great Britain. Gorightly's explorations into these arcane waters eventually led to his first book, published in October 2001, "The Shadow Over Santa Susana: Black Magic, Mind Control and the Manson Family Mythos." Other books by Gorightly include "The Prankster and the Conspiracy: The Story of Kerry Thornley and How He Met Oswald and Inspired the Counterculture," "James Shelby Downard's Mystical War," and "The Beast of Adam Gorightly: Collected Rantings 1992-2004." Previously, Feejee Press published his "A Who's Who of the Manson Family."

Mr. G. uses terms that I've forgotten if, I ever knew them so, the Kendle 'click for a word meaning' feature, comes in handy. After two attempts I couldn't get through the introduction and decided to skip it. Good move, so far the book proper, is much more interesting.

Panamont Patty likes stuff like that ?? My kinda Lady...!!!
Grtz from Netherlands...
HB