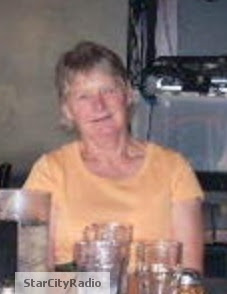 I have some type of audio open on Windows Media Player right now, I think it's a replay from 2 weeks ago from a radio show in Roanoke VA. It sounds like "The Jerry Springer Show" except they use names like Mary Brunner, Alissa Statman, Robin Olsen, etc.

They said Manson's parole hearing is 10 days away, so that kind of dates it. Apparently, it will be live tonight at 8, I'm guessing Eastern time.

Anyway, I'll be looking for a new pic of Mary Brunner, I wondered what happened to her, if she has any contact with her son etc.

The reason it is "dated" is because the shows are archieved after they are done and then put on there for people to listen to anytime. The whole(well 99 percent) cast of characters in this case in real life are straight out of Jerry Springer anyways, so thats sounds about right, lol.

I just listened to the radio show live, it was great, I recommend it to anyone following this case.

Man this is a tough call. The mouth & chin look right though...

It was taken from a town she lived in prior to mving back to her original hometown. Thats why I believe its her. It has her name she goes by now and that would be too much of a coincidence.

pvm, email me at matt@eviliz.com

Matt, Thank you and Liz for the mention ! Appreciate you guys !


vm777 said...The whole(well 99 percent) cast of characters in this case in real life are straight out of Jerry Springer anyways,

If you missed the Star City Radio Tate-LaBianca Radio Program last night you missed a good one.

Be sure to tune in next week at 8pm ET:

Too bad it's not a clearer photo. She looks like the ladies who have coffee at McD's on Friday mornings. Patty hopes she is well.

I believe that is indeed a photo of Mary Brunner. Sure looks just like her, and she had an unusual face.

You mean you hope Mary Brunner, the girl who helped smother Gary Hinman, and who also thought the Tate/La Bianca murders were "right on" is doing well? ? ?
Hmmmmm...

Patty does not wish harm on anyone, Ann.

Not sure about the Jerry Springer references Brian, I love your show.
Its great to be able to listen to these interviews with past players.
But please dont coddle them Brian, youve already got them on the radio doing the interview, so its to late for them to back out, hammer them with the tough questions, and damn their feelings, let us not forget except for the victims most of these people were willing participants in Charlies craziness.

If Brian hammers too hard, he might not be able to line up any more guests.

Apparently, Brunner was given immunity from a murder charge to testify in the Hinman case. Apparently, she either "recanted" or changed her testimony when she testified against Manson. The prosecutor wanted to withdraw the immunity she was promised. This caused a big old pile of "legal gridlock".

Apparently, the judges ruled that she got to keep her immunity from a murder charge, but not perjury, if I understand it correctly.

She looks like her mother elsie, so I believe it is her

can anyone 'photoshop' this one of Mary and the recent one of Charlie on top of Lynyrd's blog and put them together. It would be kinda funny to see them as an old couple sitting together in a Milwaukee bar listening to polka music.
Some of the posters here seem to have inside info on Mary. Any chance she will ever talk? She's number two on my wish list of Family members I would love to hear refkections from. Grogan is first.

I agree with Matt; the mouth and chin look right.

Leary, Sometime this weekend, I will try and work some Photoshop magic. I used to be pretty good with it but haven't played with it in a couple of years.

My memory ain't what it used to be, and I can't remember much of the basics, but I will give it a shot...if no one else beats me to it first.

thank you rfoster1. it's a bit of a goofy request but I thought it might be a hoot. How can one not be curious what Charlie and Mary would have to say to each other after all these years. Maybe if you can photoshop them together we could have a caption contest.

Now that would be f-ing funny!

You may be right orwhut, but I think its been over 40 years, its time for some answers, who knows how many chances there will be left. So charge ahead now, before its to late,

Well folks, it's going to take me a bit of time to do the Photoshop thing. I'm having to re-learn it all over again.

I will send it to one of the Admins when I'm done. Bear with me and stay tuned!