The Joy of Hooking by Virginia Graham 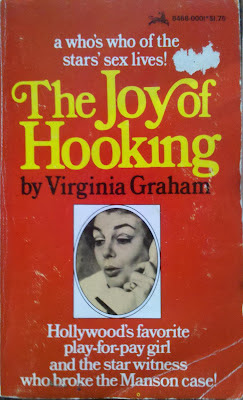 Recently while compiling a list of currently active sites about The Family and their victims (see http://www.eviliz.com/2012/04/blogs-and-sites.html), Patty was compelled to purchase a copy of Virginia Graham's literary masterpiece after seeing it on Cielodrive.com.


"The world has talkers and doers. This is for the doers and, like Dr. Vera Dreiser and Iris Knapp, the superdoers, whom I sincerely admire and respect. I dedicate this book to you."

Now y'all know where the Vera Dreiser we've seen around got his or her nom de plume. Interesting, no? On page 244, Dr. Dreiser is described as follows:


"I put in a request to be transferred to a unit run by Dr. Vera Dresier, a niece of Theodore Dreiser"
(Patty's note: see http://en.wikipedia.org/wiki/Theodore_Dreiser) . She was about 5'7" and weighed almost 250 pounds, a real big momma but a sharp dresser and a great woman. She was the only staff psychologist for the 900 women at Corona."

Another fun fact: Virginia's husband Carl Moreno became Ronnie Howard's significant other after he divorced Virginia. Carl was a bit-part actor who appeared in films starring Grace Kelly and Audrey Hepburn, according to Virginia on page 28. He was a friend of Marlon Brando's and was also present when Ronnie gave her interview to Robert Hendrickson, the transcript of which can be found in his book, "Death to Pigs." In that interview, Ronnie claims that she alone is entitled to the $25,000 reward that Virginia also talks about in this book as being rightly hers. Apparently, both women felt individually that she alone "broke the case."

When the book was published in 1974, Virginia was 42, had jumped town and was in hiding. By 2008, she was back in the spotlight when she testified against Susan Atkins' petition for compassionate medical release from prison in 2008. She will be 80 in December of this year if she is still among us, and Patty has not heard otherwise.

HA! So that's who Vera Dreiser is! I knew it had a connection to this case somehow!

As always, you offer up the most tastey morsals Patty. You're like the souz chef of the TLB blogworld. Muchos gracias.

Do you really think she was going to rent the Cielo drive house, or was that a embellishment, I haven't ever herd that before.
If she was, that is another of the many coincedences in the TLB story,
And very interesting.

from what i understand she knew the layout of 10050 cielo from looking at it as a rental. that is how she knew atkins was telling the truth about being involved in the murders.

Having a challenging time believing that a whore could AFFORD to rent that property...

She wasn't just your average whore, AC. It was quite a read! She had a whole stable of girls and they catered to the weird tastes of the rich and famous for big bucks. Patty would love to meet her someday and hear the stories that DID NOT make it into print...

Ok...seems to me, you people have a different view point then myself. Whores give it away, while a hooker charges a fee. There is a definite difference there ;)

As soon as she's dead I plan to request her FBI file. I think that she had some pretty strong ties to the Hollywood mafia.

Virginia Graham is alive at kiva home in Phoenix.