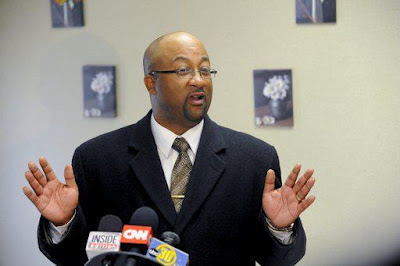 Mr. DeJon Ramone Lewis recently came to "fame" when he represented Charles Manson at his latest parole hearing. The one which Charlie chose NOT to attend. Patty heard him interviewed recently on Brian Davis' excellent radio show (see http://www.starcityradio.com). It was also on Mr. Davis' show that Patty inquired a while back, "who is Charlie's attorney?" The barrage of comments came that it was Giovanni di Stefano. Patty was suspicious of this answer because friend of the blog A.C. said it wasn't so, and because she could find no proof on line.

Anywhoo, Patty was very impressed by Mr. DeJon R. Lewis' professional demeanor and his eloquence. And she also tends to agree with him that Charlie needs a shrink at this point, not more time in the hole.  Think of the things that criminal science could learn from him!

Patty is not ashamed to admit that because of Mr. Lewis' first name and the lovely baritone of his speaking voice, she assumed he was black. Turns out, he is. How, you ask, does a black man come to represent the world's most evil man, the one who wanted blacks to be subjugated to him and his 144,000 offspring at the conclusion of his epic race war? How does this happen? Because, Helter Skelter was a lie, in Patty's humble opinion, and because Mr. Lewis appears (on the very surface, at least) to be a thoughtful and competent attorney.

Patty took the liberty of looking up Mr. Lewis on line. He did his undergrad at Chaminade in Honolulu where Patty's sister used to work, and law school at the Ventura College of Law. He passed the Bar in 2003, and practices injury and family law in Ventura, CA just south and west of Corcoran, but in a different county. How then did he get to be Charlie's court appointed attorney? Mr. Lewis has never even met him, as per Mr. Lewis. Patty needs to look into this a bit further, don't you think?

It's been my experience that "court appointed" lawyers are less than worthless. This is another example. This guy doesn't even bother to meet with Manson but probably gets paid for claiming to his "lawyer".

Manson has an "indeterminate" sentence so the only way he will ever get out is through parole or a new trial.

I remember my parole hearing, it was a sham just like Manson's. Should have stayed on my bunk like Manson did. My sentence was only 3 years though and I did it day for day.

Even if Manson had the 30 or 40 thousand dollars to pay a decent lawyer, I doubt if he could keep his mouth shut long enough for a lawyer to help him.

When I got out, the "pigs" kept trying to put me back in because of all the tickets I got, I had to go back to court and my high priced lawyer is all that saved me.

Hi Sunset. Patty has never seen the inside of a jail (as a resident of said) so she greatly appreciates your input and perspective.

What are the stats, like, 1% of the CA population is incarcerated now? Or is it even bigger than that? And when those folks get out, what are they supposed to do next? These are things that worry Patty. Because we are all more the same than different.

Oh shit, Patty is getting political, time to clam it! but let her say this: working in public health will do it to a body. Coccidioidomycosis, cryptococcidiosis, pediculosis, tuberculosis, MRSA, HSV-1 and -2, AIDS. These are things CA inmates can take home with them forever as a reminder of their visit - ugh.

If there's one thing there is no shortage of right now in Cali, it's prisons. And, communicable disease.

Hi Patty, The state I'm in is 3,000 miles from Cali but lockups all across the US are very similar. I don't know the percentage of inmates in Cali, but every jail I've ever known of has been overcrowded.

My sister works as a lab tech at a hospital. I remember "aids test day" in jail, there was at least 1 guy positive, he later died.

I was in "Dracula's castle" twice, but only for a few hours each time:

This is the supermax I was in, I was in the "death sentence" pod for about 6 months:

Finally, I was in a county jail MORE overcrowded than this:

About prison homosexuality, I talked to a young black guy that dressed like a woman. He said he had to drop the soap (in a shower full of more than 50 naked men) at least 3 times before anyone noticed.

Patty, He is the state appointed attorney for anyone having a hearing that week. He did go to meet with Manson before the hearing but Charlie didn't show up for the meeting.

Thanks cielo. How does one get that gig, anyhow?

Here is what happened. Charles was writing to an attorney of HIS choice. A few weeks prior to the hearing, his mail privs were cut off for some unknown reason... and he can't do phone calls because he is in SHU. So, this guy was appointed by the court. Like most court-appointed attorneys he was pretty incompetent. He had no clue why Charles won't attend his hearings.

I was watching Diane Sawyer's interview with Charlie and the girls which took place in 1994, the 25th anniversary of Tate/LaBianca.

Pat distinctly says that Charlie told them, before they left for Cielo, that they should leave a sign, "something witchy"...hence the "PIG" on the door.

Then Charlie totally corroborated that he said this to them before they left. He knew what they were going to do. He's on record saying that he told them to leave "something witchy"...which he then put a Charlie-spin on as "I told them that if you are going to something, then do it right..."

How does "leave something witchy" translate into "do a good job"?????

Charlie knew what was going down.

As far as the whole race war thing...I believe that this is something that he perpetuated amongst his "Family" to brainwash them into doing his bidding.

I believe that Charlie's real hatred was for those who had made it in the entertainment industry or for those members of the establishment who had had success through hard work. He was jealous because his own music career never panned out and he got blown off by Dennis Wilson AND Terry Melcher, hence sending his minions up to Cielo on that first night.

It's no wonder Charlie doesn't show up for his parole hearings. The guy is old, and decrepid and has absolutely no hope of a life outside of prison. I don't think it has anything to do with admitting guilt and showing remorse...he wouldn't survive ten minutes in the "real world". Either someone would get a claim to fame and a place in history by doing away with him, or he would do something himself to end up back in prison.

By his own admission, he didn't want to be let out of prison in the late 60s, so it seems that his wanting out now is even more of a moot point.

Maria, what you just wrote sounds like a synopsis of everything that has been regurgitated and accepted as "fact" for 40 years: right down to the trite phrases "brainwashed into doing his bidding," "sending his minions to Cielo that first night." Look deeper, grasshopper. Cielo was NOT the first night. It is far more complicated than you are making it out to be.

PS Patty really likes you btw except for that awful icon (Patty is blonde).

I am actually going platinum gradually to be able to let the gray come in...lol

Please Patty, help me look deeper...I would love to see beyond the obvious. Seriously...

This case continues to fascinate me.

Patty wrote, "How, you ask, does a black man come to represent the world's most evil man, the one who wanted blacks to be subjugated to him and his 144,000 offspring at the conclusion of his epic race war?"

Incredible irony in that possibly Manson's last representation on the record could be a black person as you laid out Patty !

However, A.C. mentioned on air that Manson may be represented in an attempt to file legal motions to get Manson's sentence "commuted" or "pardoned".

Maria, if I told you to do "something witchy" would that induce you to multiply stab everyone in the household, including a pregnant lady?

Somebody told me to leave "something witchy" I'd prolly write a pentagram in the dirt on their car windshield... IF I followed that suggestion at all.

I get what you are saying AC, but Charlie knew where they were going...up to Cielo...what is it he expected them to do there? Rob them? Either way, nothing good was going to come of them going up there.

And he said "leave a sign...something witchy?"

And he did send them there. He told them to go up to where Terry Melcher used to live.

Whether he told them to kill everyone there, well this is where the disagreement occurs.