"Charlie and I have a friendly relationship over several years now and we have had over 200 phone conversations as well as the exchange of many cards and letters. He has even sent me a Christmas card! Charlie was kind enough to tell me about a stash of supplies buried near the Barker Ranch and circle the location on an aerial photo.

"I have the photo but you can print Charlie's letter describing what is buried at the stash location.  It is illegal to bring a metal detector into a National Park or dig in a National Park.

"Charlie has given me a Family name. This does not mean that I am a member of the Family darn it!  The name he gave me is "Dog Boy". He said that on the chain gangs in the south, when working on the side of the road, a guard with a dog would patrol the area in case anyone tried to escape. When one of the inmates saw the dog coming towards them, the word would be passed down the line, "Dog Boy coming, Dog Boy coming". 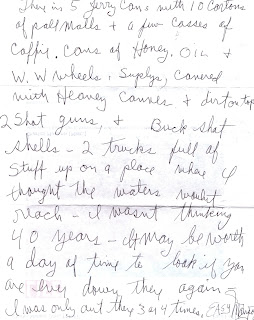 Very interesting, but sad that since you can't dig in a National park it probably won't ever be found.

Well, I would take this with a grain of salt. For all we know, Charlie was just being entertained at his expense.

Another possibility is Manson told this guy to look in a particular area because Manson may know where any bodies might be, and this area is far way from it.

Sunset, the locations of possible grave sites have already been determined by the two dogs (Buster & Ness), ground sonar & other scientific methods.

Manson was just sharing a memory of a supply stash that Sgt Dostie would have little interest in unearthing, even with a permit.

It's a pitty they didn't squirrel away a truck load of something that's appreciated astronomically by now.
Harold

that would be an interesting article - a composite of "friends" that Charlie has gathered over the years. This Sgt Dotsie seems like a cool character.
Just out of curiousity, and I think I know the answer to this, but have Liz or Matt or Patty ever attempted to befriend Charlie, or any Family member for that matter. You don't have to name names, just wondering.

Leary I'm afraid we'll have to invoke our 5th Amendment rights on that one. But I can say we've never attempted to contact Manson.

ah, I got my secret eviliz decoder ring out and am reading between the lines, Matt.
are you channeling Roger Clemens in invoking your fifth?

Can sum1 give me the secret decoder ring so I can read Charlies handwriting?
Im sure there are more stash locations than this one, didnt the BPT guys find one a while back?

I think I'm more channeling Clem in court wanting to substitute Daye Shinn (at Charlie’s suggestion) for Charles Hollopeter. All that was required of Clem was a one-word answer: “Yes.” and all he could answer to questions was "huh?".

Just out of curiousity, and I think I know the answer to this, but have Liz or Matt or Patty ever attempted to befriend Charlie, or any Family member for that matter. You don't have to name names, just wondering.

I have written Charlie three times over 10 years and never received a reply. I have exchanged one letter with Lynn around 2003.

Plus the ex members and family members who have sent me things here I have shared with you all.

And yes of course there are people we have spoken with that WE have promised never to discuss our conversations with.
And believe me, it is nothing exciting. LOL And never crime related but fun and intriguing always.

yup, I hate Clemens too Matt, and I went to college with him. What a smug azzhole. And guilty as hell of course. Imagine Roger and Charlie sharing a cell. Not THAT would be some quality reality TV. Ot Doonsebury fodder. Or South Park.
Thanks Liz for info. I am wishing, as I guess we all are, that Manson will see the end coming and decide he wants the stage one more time. Why not come to a TLB blog and let it all hang out Charlie? As the saying goes, we're all just dust in the wind anyways.