The Smell of Death at Barker Ranch 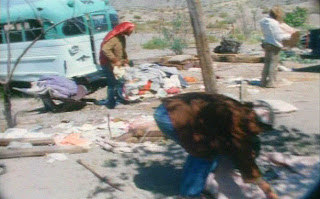 Compounding this lack of concern for potential victims was my discovery of a hand written "help" note left behind by a possible hostage. After our trip, with members of the Family to their Death Valley hideout, Craig and I alone, later made another trip to Barker's, but this time with a dune buggy up the more difficult Golar Wash canyon. The other difference was, this time, the scorching desert heat was fast approaching. Also, this time we could do some investigating on our own, without the watchful eyes of the Manson Family. Strange as it seems now, there are only two things I remember about the abandoned Ranch from that trip.

After entering an old out building, (can be seen as Gypsy points it out in the new Manson Gang film) I found a piece of paper with handwriting on it. I took it back outside and read it. It was a note, apparently written by a daughter in hopes that it may find its way home to her mother. Somewhat desperate in its tone, I realized that the game of making a movie about the Manson Gang, wasn't a game anymore. Many thoughts were now crossing my mind, as Craig and I had a bite to eat. Also exhausted, after lunch we decided to take a nap on the ranch house front porch.

It must have been a hour or so later, when we awoke to the most God awful smell that anyone could possibly have imagined. The next thing we realized, was that it must have been at least 120 degrees, and we were in the shade. I'm sure that the troubling note found earlier had played some tricks on my mind, but without any question, we understood that the horrible smell could only be coming from a dead body. Craig quickly fired up the dune buggy and I, almost in a panic mode, returned the note to its original resting place. With breakneck speed two young filmmakers got the Hell out of there.


One of the possible grave sites sites is about 50 feet away from where Hendickson was sitting on the front porch when he smelled it.  Since it was soon after the arrests there would still be a lot of soft tissue decomposition going on (very smelly) and in that sandy soil, it would migrate up very easily.  According to one of our sources who went to the Barker Ranch in 1969, there is about two feet of alluvial deposition on that spot since 1969. If there is a serious dig it must be much deeper than the 3-4 feet that was previously allowed.

Am I the only one who the note reminds of the desk top poem sometimes attributed to the killer of Cheri Jo Bates, in the Zodiac case?

Why did they only allow that shallow of a dig the first time? I would think that if you went through all that trouble in the first place you would dig deeper.

@ Bee Grass: This is the explanation I got from Sgt. Dostie:

"The sheriff wanted the press to go away so he limited the depth. He was angry that Debra and I went to the press to force him to do the right thing. He wanted to discredit us and the scientists. Keep in mind that Atkins said they were buried eight feet deep. If it was not his idea, it was not going to happen.".

why doesnt someone just sneak in and dig? How many people are ever out there to catch you?

Matt...Similar situation in Illinois with the John Wayne Gacy case. Kind of seems like it is easier just let bodies stay buried than to deal with what needs to be done if they do find some unsolved murders. Difference is Gacy is dead, and if there are bodies at Barker Ranch the people involved might be free walking the streets.

The dig was also limited/cut because of the discovery ancient Indian artifacts........which under federal law can not be disturbed.

You mean the pop top from a pre 1972 can? They didn't go far enough for whatever reason.

Fiona, Barker Ranch is on State of California owned property. You cannot dig on it without a permit. It's punishable by jail time. Better just to go through proper channels and find remains with authorities present.

@sbuch113: very interesting point, that sounds much better than find dead remains. Could you please give me a link to that?

from sbuch113 link (thanks!)
"One site revealed fragments of animal bones, an ash pit and some stones used to make arrowheads. Rangers determined it was of archaeological interest, so digging stopped and the site was turned over to the National Park Service."

Whether its natives or hippies Patty can't figure out why no enterprising grad students from any of the number of surrounding Universities hasn't written a grant proposal? Anyone?

Thank you mr. Hendrickson for the use of your image. Patty loves this one.

If Sadie said the bodies were 8 feet deep they should have gone down ten, even if it took a backhoe.

Whether its natives or hippies Patty can't figure out why no enterprising grad students from any of the number of surrounding Universities hasn't written a grant proposal? Anyone?

I wonder the same thing, Patty

Maybe the findings were not that significant?

Maybe they have tried and got rejected.

From the looks of it, I don't doubt Barker smelled of "death" and probably a number of other things in 1969.

Speculation based on rumors and boasts by Atkins and others is pretty spurious. This is a problem the police have had since this case started in my opinion, they place WAY too much emphasis on what Manson family members say.

Until anything concrete that resembles evidence that can be produced in a court is located, it doesn't exist.

@sbuch and Zarathustra. This is Sgt Dostie's feedback on the "indian artifacts":


Three of the four sites we have identified have specific information that people were murdered and buried at those locations by members of the Manson Family.

An old native American burial several hundred years old, would be well within the detection ability of Buster however.

The fourth site is near an ancient dried up spring (Buster 3). A member of the Death Valley tribe looked at the site and said his people did not bury anyone near springs. There are also Chert chips at the site indicating ancient native American activity. It was also a known campsite for Manson family members.