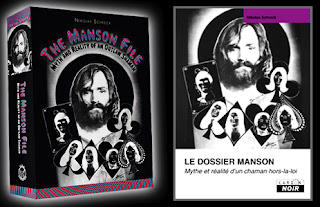 Some of these 'facts', make at least as much sence as what we've been reading for years. Someone must be telling the truth. I wonder who it is.

Good book report. The grump gets an A.

These relevations seem more pausible than the Helter Skelter theory, but does the authour offer any facts or just theories and statements??

The evolution of TLB beliefs is a fascinating study. Most of the world still believes in Helter Skelter, that the killings were orchastrated by Manson to start a race war.
However, most serious students of the event discount HS (or loathe it as in the Col's case) and so look for other causes and motives.
I, like many others, have/had concluded that it was "killing for killing sake" - i.e., that Manson just got fed up, snapped and lashed out. More specifically that Charlie, believing he was on the hook for killing Crowe, wanted a level playing field with the rest of the Family and set out to get their hands dirty too.
This stuff with the Grump...Mafia and drug burns and such requires a whole other leap into a new pool. I went through this with the JFK assassination and it lead to one of my most cherished beliefs - that dissonance causes apathy. That is when there are so many 'versions of the truth' most people just shut down and don't give a shit anymore - few enjoy brain or info overload.
900 pages!!! That is a whole lot of information. And clearly allot of it is highly plausible stuff.
The Col rails against the fact that most people don't want to jump into the deep end and wade through all this stuff, instead they accept the Bug's fairy tale.
But to me that is like railing against the wind. Very few folk have the energy or interest in wading though everything TLB as the Grump has done.
Kudos to him. Great job. And Matt too.

Everyone with an interest in this case needs to ask themselves one question - "If The Bug had been able to extract Tex Watson from Texas to stand trial with the others, would he have ever gone after Manson like he did?"

Really good thought, Adam. I still think he would have. A prosecutor rarely gets an opportunity like VB did - to prosecute a trial of the century. Without CM & HS it would have just been drugged-up hippies on a murder spree.

What likely WOULD have been different was the trial itself. Deep down I don't think Watson would have behaved like the girls did. He might have changed those dynamics.

Well if Rolling Stone didn't publish an off the record interview with Aaron Stovitz, it's likely none of us would've ever heard about Helter Skelter.

But Matt how could even Bug have juggled presenting Manson AND Watson to the same jury?

"Ladies and Gentlemen of the jury, to my left the man who commited roughly 95% of the carnage on those two nights, and to my right the guy who, erm, talked him into doing it."

Who would the focus of the trial fallen on?

Without Tex and with Sadie protected in exchange for giving evidence, all Bug had was a guy who was never at the scene at the time anyone was killed, and two girls - one of which was a relatively minor player.
By trumping up Manson's involvement, Bug was able to sensationalise the trial and give certain factions in the media and the Establishment what they had been praying for - a way to destroy the hippie movement.

Would the jury have been so willing to accept Charles Manson as the ultimate face of evil if they could have looked into the eyes of Tex Watson in the flesh?

Did Bug pull a classic misdirection which stopped people from asking "What reasons/motives could Tex have had for killing those people?"

I recall saying a few of these things a few times in a few forums, before reading this.

It also says in the book that Charlie is related to the Carradines, John and David

Related to the Carradines!
As far as I know no one has tried to pin John's and David's deaths on Charlie and Bruce. I wonder when they'll get around to it.

All I remember is a footnote that says this. It was on his mother's side.

I told you ... Lot's of information in the book

I find it very hard to believe Jay
(or anyone) would do a $20,000
drug deal at someone elses home and not their own.

Sharon was supose to have been fed up with Gibby & Voytek's drug use/dealing at Cielo. She wanted them out. Why would she allow Jay to make drug deals at Cielo?
NOT becuase he was her ex boyfriend.
Maybe your thinking Jay did the deal while Sharon was out of Cielo? I doubt Jay would of disrespected Sharon that way.

Maybe your thinking Jay did the deal while Sharon was out of Cielo?

Liz - i wasn't thinking anything. Just relating what it says in the book...

I have to agree with Liz on this one. Yet more grasping at straws with the drug burn theory...and now implicating Rosemary LaBianca?

I would be rather skeptical of a work bearing the title "Outlaw Shaman". Manson was, is not, and never will be shaman.