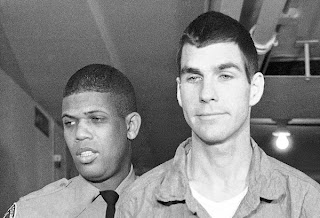 The official record says that Charles Manson and his cult followers murdered eight people during their reign of terror across Los Angeles more than 40 years ago.

But for those involved in bringing members of the Manson family to justice, there has always been the lingering suspicion that their trail of death was longer. Over the years, questions have persisted about a man's apparent suicide in England, the drowning of an attorney and whether bodies are buried under the California ranches the cult called home.


READ THE ARTICLE IN THE LA TIMES HERE

This would be the same LAPD that has bungled this case from the beginning. Steven Weiss found Watson's Longhorn revolver Sept 1, 1969 and turned it into the police. It wasn't until Dec 16, 1969 the police "discover" they had one of the main murder weapons in their possession.

In the 40 plus years since, there have been many attempts to link the Manson family to additional murders, all have failed.

OK, in Tex Watson's stupid book he wrote this:

There were three basic motives behind the murders that took place sometime past midnight on August 9. The most obvious was the one Charlie had articulated to us that afternoon: to do what blackie didn't have the energy or the smarts to do-ignite Helter Skelter and bring in Charlie's kingdom. There was also the need for more cash, first of all to finance our preparations for Armageddon-the same thing that had motivated the drug burn and Bernard Crowe's supposed murder, the killing of Gary Hinman, AND ALL the proposed abductions and murders in the Chatsworth area-and also to pay $600 bail for Mary Brunner, who had been arrested earlier that day for using a stolen Sears' credit card.


OK, he is told people RIGHT THERE that they were responsible for all the other murders in that area. I just caught on to that sentence.

What did Tex mean by 'proposed'?

You never know, Watson's brain was pretty fried then, he might not recall all. But I am still unclear if the guy who helped Watson write his book had access to these tapes wouldn't he have used anything of substance. Or was he restricted by something?
Bottom line is that enough Family members referred to "other" murders so every stone should have been and still should be turned over.
Isn't what we are all secrectly jonsin for is one more Manson murder trial before all the actors leave the stage, so to speak. How cool would it be to see Mary or Ouish or the Squeakster under oath one more time. Whatever network showing it would win the ratings war...Oprah are you listening. Though I would prefer it to be on E or Comedy Central with Chelsea Handler and Jon Stewart doing the commentary.

Reading Watson’s account is like eating a hot dog. It’s OK, as long as I don’t think about it too much.

So Charlie tells Tex that Helter Skelter needs just a wee bit of a jump start, so Manson can assume the throne as the rightful Emperor of the United States. Chief Manson would then direct the actions of mankind via his god-like vision, inescapable charisma and innate wisdom.

Oh! And get 600 bucks while you’re at it. We got to bail out the equally omnipotent, Mother Mary who although ready to assume rule as ‘Vice-Queen of the Planet’, hasn’t quite hammered out how to skim a Sears Charge card. And so it is written.

Not sure how to add links. Anyways, another good article.

chaplin ray had every reason to cover for watson--he wanted him out of prison.

It's funny reading the headlines accompanying this story. So far all that's happened:

The trustee with the tapes contacts Tex Watson and the LA County District Attorney. The DA notifies the LAPD about the tapes. LAPD writes the Department of Justice formally requesting the tapes. Then the hearing. Yet, not one person has listened to the tapes.

Here is my favorite headline so far, from the UK's Daily Mail..

Got me to click on their link, mission accomplished.

And now, the right to attorney client confidentiality is trampled. Use the Constitution for toilet paper.

Don't get me wrong, I dislike Watson, but if they can do this to him, what's next? Getting someone to confess through torture?