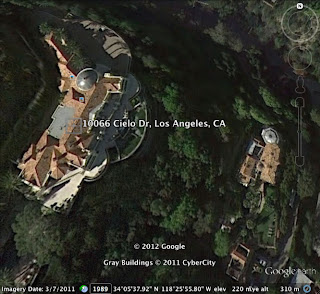 Hello. I have a question about the Cielo twin house for the Q & A.

Most would be aware that there was a house very similar in design to 10050 Cielo, known as the twin house, built at the same time and located below 10050. Now when one inputs 10066 Cielo Drive Los Angeles, Ca. into Google Earth, (sorry can't get a screenshot to work) we see 10066 with it's tan roof and an interesting turret style roof structure. There is also a smaller house below with a similar odd turret feature and similar roof color. So my question is - is this mere coincidence or are these two houses somehow related as were the original 10050 and it's twin? And thanks for such a great forum,

The original home located at 10050 Cielo Drive  in Benedict Canyon, Los Angeles California, has been occupied by many famous Hollywood figures, and was the scene of one of the Manson "family" murders. The house was designed by Robert Byrd in 1942 for French actress Michèle Morgan. It was extremely similar, but not exactly identical to the house which sat on its own plateau directly below 10050, 10048 Cielo Drive (often referred to as the "Twin House" -- {see also "10048 Cielo Drive, Twin House"}). They were originally built on land called "The Bedrock Properties" and were built at the same time. The French country style structure was located on 3 acres (1.2 ha) at the end of a cul-de-sac on Cielo Drive in Benedict Canyon, an area west of Hollywood in the Santa Monica Mountains that overlooks Beverly Hills and Bel Air. The hillside structure faced east and featured stone fireplaces, beamed ceilings, paned windows, a loft above the living room, a swimming pool and a guest house. By the end of World War II Morgan had returned to France and in 1946 Lillian Gish moved in with her mother while filming Duel in the Sun. Past residents included Cary Grant and Dyan Cannon, and Henry Fonda.

Howdy. Patty went and looked up the twin house at the LA County Assesors' office. According to that website, the address is now 10048. The house that is there now replaced the 1941 house in 1987. It is over 5,700 squre feet big, and its current value is $1.7M.

Given this information, Patty does not believe that they were built to resemble one another on purpose. See http://assessor.lacounty.gov/extranet/Datamaps/Pais.aspx

I think it's nice that the "Twin House" kept its original kidney-shaped pool. Other than that, it's unrecognizable. I have always thought it coincidental that the remodels look similar from the bird's eye view. They were not remodeled at the same time, I thought.

I know a guy (two guys actually, maybe three) who knows the guy who lives at 10066 Cielo Drive. If he still lives there...he was the one who finally bought the place from the speculators who built it.

When I get the chance I want to ask them if they've ever visited and what they may have talked about.

Thanks for all the replies. And thanks Patty for the info. Must be just coincidence. Kind of puts to rest the old detectives adage that there is no such thing as coincidence.

@ starship. Are you referring to JF?

Yes, indeed I am.

I would be very interested to hear what they have to say. Please keep us posted.

wengr said...
I would be very interested to hear what they have to say. Please keep us posted.

Here's a question that's not important to the analysis of the Tate incident, but as a dabbler in residential real estate for 30+ years, l'm interested in *why* and *when* the Cielo spur road was cut, and if it was originally a dedicated driveway for 10050.

My guess is this.

Cielo Dr, as it runs from Benedict Canyon Dr to Davies Dr, was the original road. Perhaps Bella was cut at about the same time.

But the Cielo spur, branching off from Cielo Dr at the Bella branch, was cut sometime later. It permitted the large (3+ acres) at 10050, at the end of the spur, to be developed because while the address (10050) would indicate that the frontage is along the lower reaches of Cielo, nearer to where Beverley View Dr joins it from the left (as you ascend), that frontage is steep hillside. No driveway could climb it easily, so the developers approached the lot from uphill by cutting the spur.

Does anyone know about the sequence of development along the Cielo spur?

I replied but i dont see it. ☹️

Merman, if you are replying to my sequence of development question of 2019, yeah, I'd sure like to see any further information or speculation about development sequence. One could look in the assessor's office website, but what I'm more interested in is the original ownership of the addresses along Cielo from about Beverley View to Bella.