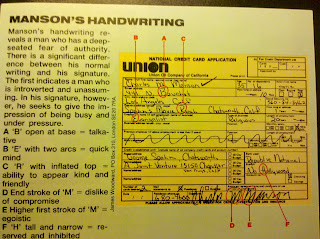 Eviliz loaned Patty a bunch of her interesting and rare items while we were all on tour together. Recently Patty started going through them and is finding all kinds of cool stuff to post including this image from a British publication called "Murder Casebook" published in 1990:

It is supposedly a "handwriting analysis" meant to enlighten we the readers to Charlie's true character. Graphology, as this kind of analysis is called, is basically bullcrap. From Wikipedia:

"Graphology is the pseudoscientific study and analysis of handwriting, especially in relation to human psychology. In the medical field, it can be used to refer to the study of handwriting as an aid in diagnosis and tracking of diseases of the brain and nervous system. The term is sometimes incorrectly used to refer to forensic document examination. Graphology has been controversial for more than a century. Although supporters point to the anecdotal evidence of thousands of positive testimonials as a reason to use it for personality evaluation, most empirical studies fail to show the validity claimed by its supporters."

What remains interesting to Patty however, are the following tidbits revealed in Charlie's application for credit:

2. He lists his occupation as "Evangelist," and claims that he's been at it for 20 years.

3. He lists his current address as 441 N. Bouchet in LA, and claims that he has been there for 10 months. There is no such address any more when you search for it on Google Earth.

4. He lists his former address as Spahn's Movie Ranch, and states he lived there for a year.

5. He claims to have a checking account at The Republic National Bank in North Hollywood.

6. George Spahn and someone on Chandler in Van Nuys are listed as his credit references.

Was he being serious, or was this just Charlie amusing Charlie with his own ironic sense of humor? Patty found it interesting.

HAHA! I think its funny because 441 N. Bouchet in LA is the OLD jail here in Los Angeles Downtown! The jail is still on Bouchet but I dont know the actual address.

The signature looks like his, but someone else wrote the rest of it. That looks like female printing.

I think I found a typo in the description of this post. The address is not "Bouchet" but "441 Bauchet St." If you look closely at the document, it does appear to be an "a" to me. It is indeed an address to a jail, here is a link to their website:

I also agree with Matt that one of the girls probably filled out the application and Manson signed it. Doesn't say much for the "handwriting analysis" does it?

I see from Mr. Manson's application he wants 2 Union Oil credit cards, I'm surprised he didn't want 16 as he had 16 dependants, that would make sense wouldn't it?

Looks like a left handed person due to the backwards slant of the handwriting. I agree, Matt. Female.

That is his handwriting. I have letters with that writing. He has various types of handwriting. He goes from cursive to bold caps to small to whatever. His signature varies as well. His writing changes just as his personalities change and his appearance as well. Have you noticed his appearance changes all the time. Long hair to short hair to no hair to mohawk to dreadlocks, etc.... He is multi-everything.

I read about this application in a book, I can't remember which one, that he did this as a joke. That application photo was inserted in the book He does things like this. More often when he was younger. He likes to play tricks with the guards - with everyone really.

It's in Helter Skelter

"A Joint Venture" on Chandler is Phil Kaufman

there is no date on it

"there is no date on it"

I'm guessing this was made during the period when they were at Spahn Ranch when Manson wouldn't let anyone have watches, clocks, calendars etc. They probably didn't know what the date was.

Manson might not have wanted clocks and watches around because he did (I think) 7 years in Terminal Island prison and didn't want to be reminded of the concept of "doing time".

I work a few blocks from Chandler in Van Nuys and went to look for that address...it doesn't exist. I wonder if it ever did.

He was probably just messing around. He's not as nuts as people think he is- he loves attention and has had nothing else to do.

also, I really think the murders and their aftermaths were a case of, "holy crap! they actually believed what I said and did. time to cover my tracks." in an effort just to score tail.

daniel said... also, I really think the murders and their aftermaths were a case of, "holy crap! they actually believed what I said and did. time to cover my tracks." in an effort just to score tail.

Daniel,
I've thought just about the same thing, for a long time. Maybe some day, I'll change my mind.

One more thought I've had is that Charlie had his meeting with Sharon at the house and felt extreme rejection from her and that's part of why he chose that place; not the Terry Melcher scenario. What man wouldn't be attracted to her?

Daniel,i seriously doubt charlie would be interested in sharon, as she was a (superficial actress establishment pig),types the manson family did not like. In fact Frank sinatra and Dean martin were on the manson familys hit list, according to susan atkins. Also, charlie did have trysts with angela lansburys daughter didi, and the daughter of lou abbot from abbot and costello fame,at least that's what i have read, i believe on this blog.Ironically,manson was well regaurded in the entertainiment field but didn't like their superficiality.

Daniel,charlie had the charisma to attract women without having to try. Squeaky said: I went right after charlie, because "he didn't put any moves on me".

Was just a thought. We'll probably never know the truth. Knowing musicians and their attraction to and need for beautiful women, that ran through my brain.