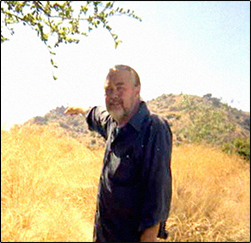 Robert Hendrickson is best known for directing the 1973 film "Manson", which was nominated for an Academy Award for Best Documentary Feature. Starting in 1969, Hendrickson spent two and a half years filming the Manson Family for the documentary.

Now after all these years, Hendrickson has a new film AND a new book on Manson. The book, "Charles Manson - An American Nightmare - Death To Pigs" is a transcription of all the interviews that were filmed while "Inside The Manson Gang" is the companion DVD. While most new Manson "products" simply repeat the fabricated "Helter Skelter" motive, Hendrickson's book and DVD actually provide NEW insight into the murders. While reading the transcripts, new facts emerge that put a new spin on the "trial of the century": There were conflicts of interest in regards to the lawyers; there were staged police photos; there is a Black Muslim influence; and the possibility that the murders could be a "performance art" commentary on the Vietnam War.

I personally consider the 2 Hendrickson films I've seen to be the benchmark on this subject. It's one thing to be able to see and hear "Cappi's" voice, "Gypsy" frolicking naked, Juan Flynn's penis, etc. as opposed to reading a transcript. I'm glad Mr. Hendrickson decided to load his camera equipment that Saturday morning, instead of sleeping in. In 1970, it was one of those rare instances where someone happened to be in the right place at the right time with a camera, apparently a high quality camera as well.

It's almost like being "inside the Manson gang" without the drugs or having to worry about someone clonking you in the head with a pipe wrench because they think you are a snitch.

So far as piracy is concerned, the current technology has voided most copyright laws. If you have 6 million people downloading a pirated movie, it's kind of hard to stop that without shutting down the entire internet. The same programs that allow the internet to function, also allow piracy.

Mr. Hendrickson had a unique perspective on this American tragedy (a dangerous perspective as well), and I'm glad he is still sharing it.

Thank you Mr. Hendrickson for the wonderful interview. Performance art, huh? That's some dark performance art. I like the way you think.

Over 40 years after the fact and Ronald Hughes is still discussed as a plausible planned ‘hit’ by the family. Was there anything left clinging to the bottom of the barrel once Hughes replaced Kanarek? That’s some performance art where a person is on trial for murder and selects representation from the firm of Moe, Larry and Curly.

Adding to this, some individuals named James and Lauren who although interviewed by police, ‘could’ have been the Willetts that gave Hughes a ride to eternity and it’s off to the conspiracy races.

Oh my gawd! Is it a coincidence that the very place where Hughes was last seen by the mysterious James and Lauren is named Willett Springs? It’s getting more tangled by the second.

There’s no way to predict if someone who resides in a friend’s garage and decided to go camping, in the Winter, during a recording setting storm, in a wilderness area with a couple hundred pages of transcripts and just as many extra pounds of weight, would be associated with poor decision making. This is clearly another brilliantly planned execution by the very people who nearly dispatched Saladin Nader. Saladin none the less, was effectively neutralized when Atkins cunningly unleashed her back-up plan, facilitating the escape of accomplices Grogan and Kasabian.

I thought it was established that the Willetts had not met the post-murders manson circle folks at the time of Hughes disappearance. Also, the people named in H.S. sued the Bug for being mentioned and lost and that was after HS was published and after the Willets had been murdered.

Are other films copied by pirates and sold on ebay or does this just apply to Mr. Hendrickson's films? I'm confused.

Orwhut, one who knows about pirate sites can basically download any movie for free.

he needs to let go of this whole 'piracy' thing. saying how amazing paul and brooks songs are and that the world needs to hear them and then say 'but someone will copy them' is a bit of a cop out in my opinion. i used to be a musician and i always gave stuff away for free just so our music could be heard and enjoyed. copying film/music/anything will never stop. get over it.

i guess we'll have to wait for someone to buy all the rights to this stuff before we see/hear more. its a shame, Manson and ITMG are excellent films.

That’s the point about Hughes’ death. The Willetts have long been removed from the pool of consideration. And they could/should have been excluded while ‘Helter Skelter’ was being penned. Was this dramatic license perhaps? Selling the sizzle?

The newspapers reported the disappearance of Hughes from the Sespe Wilderness, during a record storm as - mysterious. Take a look at the area recently filmed (2009-ish):

Did you notice the boulders (0:49-1:00) and how smooth they appear? That tells me the area has been prone to some violent gully washers since the Earth has cooled and I don’t want to be near the banks of that creek during a storm. Would a New York transplant (Hughes) notice the same signs?

I would imagine the reason this bit of Manson Family trivia is overlooked is due to how inaccessible this area remains today. The spot where Hughes’ body was recovered was many miles farther downstream and by what I could gather from police reports was in this area: 34.488793,-118.94132 (Google Maps).

Yet there remains some desire to tie Manson to this event with the faintest of coincidences, while avoiding Occam’s theory.

louis365 and Terrapin,
Thanks for responding. It seems to me that there must be money in films and recordings despite the pirates or no one would make them.

I haven't read "Death to Pigs", I LOVE the "Manson" documentary and I've seen "Inside the Manson Gang" which regardless of the great footage is kind of a piece of shit. Mostly due, in my opinion, to the horrible, horrible music and stock background noises. This mixed with Hendrickson's bullshit droning on & on makes it near unbearable to watch. I was SO excited about this coming out since I've been into all this Manson junk for years & years now. Big letdown. The worst part? I'm STILL gonna end up buying the goddamn book even after spending the $$$ on these dvds!

I also still have my original big-box, clamshell, official vhs version of Manson too. Cherished item.