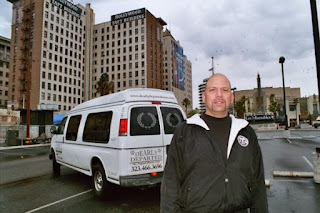 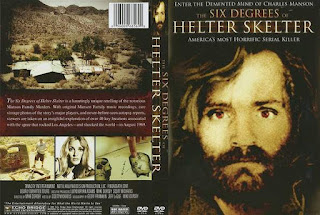 I just found the "findadeath" website yesterday. I seen the documentary "Six Degrees of Helter Skelter" about 2 months ago, it's very good.

Apparently, Dennis Wilson had at least 2 cars. A Mercedes that I think the Manson girls used for garbage runs, and a red Ferrari.

It was my understanding that Grogan wrecked the Ferrari. I found an interesting story about that car. Apparently, it's original owner was the singer Sam Cooke. Cooke picked up a hooker one night and took her to a motel room. The hooker fled the room with Cooke's clothes and wallet while Cooke was in the bathroom. Cooke got in the Ferrari and drove to the motel office looking for the hooker wearing only a suit jacket (and maybe shoes). There was a scuffle with the motel office worker and she shot Sam Cooke dead. When the police arrived the Ferrari was still running. A probate court sold the Ferrari and Dennis Wilson ended up with it.

Patty has written a nice piece about The Six Degrees of Helter Slelter, sunset77 saw it a couple months ago, and I just happen to have watched part of it last night. Is OeeeeeOooo at work?????? Probably not. More likely, an effect of the six degrees.

I've been on this tour just recently. I enjoyed it very much, a cherry on top would have been if we were able to actually walk up to the locations. But I understand completely about respecting the current homeowners privacy and such. One thing I definitely disliked was that he trashed "Restless Souls" I understand we all have our opinions, but a lot of people in the van had not read the book and I found that very tasteless of him. Almost to the point where it ruined the tour for me because I really enjoyed that book.

I'm just a kid, and I find any information on this subject fascinating. Scott was a very nice guy and he's very knowledgeable, I would recommend his tour to anyone regardless of my sour note.

Liz Hernandez said...
I've been on this tour just recently.

Neat Liz. How much did the tour cost?

$50.00, you have to reserve about a month in advanced cause they're always booked up. At the end he have us a little ziplock back with a matchbook from El Coyote Restaurant and a piece of the Cielo Houses chimney. I snapped a ton of pics from the tour.

Welcome to the blog, Liz.

I watched the dvd and turned it off, he's inaccurate on several points and locations. The fact that he trashes Restless Souls is further proof of his douchebaggery- does he think Orca Tate is going to endorse him or something?

All these tours do the same thing- make shit up to try and get tips. Look there's Adam Sandler oh shoot I couldn't stop in time.

Douchebaggery, I like that. A pseudo neologism of sorts. Appropriate though, it seems.

Liz, thank you for the heads-up. I was thinking about taking that tour but now I'll bag it - or douchebag it, if you will.

I have to disagree with the Colonel on this one. Scott is really a nice guy. Yes, I do know him. I went on the tour almost 2 years ago. It was pretty obvious he knows his shit. I've also talked to him a few times about the case and he's not just retelling the same old stuff. He has researched it. A lot. I seriously recommend his tour. One of the things I really liked about the tour(at least on the one I went on) was the discussion in the group, yes Scott was the guide but he let each person talk about things and ask questions and he did his best to answer them, sometimes they were answered by other members of the group. It was nice to interact with others who were interested in the case as well.
I'm probably going to take the tour again. It was really good and like I said, Scott is a very nice guy.

Oh and colonel, I mean no disrespect at all by disagreeing with you.

Because Scott is a Helter Skelter purist and thinks Bugliosi is God, it makes sense that he would not like Alisa's book. Regardless, Patty would still like to meet him.

I enjoyed "Six Degrees" enough that I added it to my collection. I even sent Liz (the old one, not the new one) a copy.

Had I been able to make the trip with you guys, I was going get Liz to stay in LA with me for a couple of extra days and take that tour on one of the days.

Douchebaggery or not, I would gladly pay Scott $50 bucks and let him drive.

Seen this when it was 1st released on demand cable thoroughly enjoyed it a heads up anyone interested in purchasing a copy Overstock.com sells it for like $6 bucks somewhere in that great deal price range. Hello Patty found alot of great info from your posts thanx for sharing.
I'd like to the subject of the Process church brought up for discussion. I know some of you guys aren't fans of Sanders The Family personally I love my 1st edition before the chapter on the Process was removed. Anyone interested in a great read The Ultimate Evil by Maury Terry released in 89. Very interesting conspiracy book linking MANSON Son of Sam Process Church L.Ron Hubbard check it out.