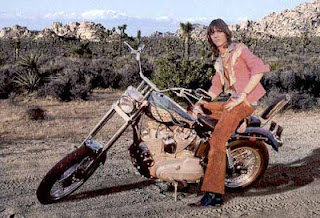 Parsons had first met up with the Stones when they were in Los Angeles in the summer of 1968 to mix their Beggar's Banquet album. Also hooking up with the Stones around that same time was Phil Kaufman, a recently-released prison buddy of Charlie Manson. Kaufman initially lived with the Manson Family after being released in March of 1968, and he thereafter remained what Kaufman himself described as a "sympathetic cousin" to Charlie.

His Flying Burrito Brothers released their second album, Burrito Deluxe...By June, Parsons had been booted out of the band, reportedly due to chronic alcohol and drug abuse. He quickly signed with A&M Records and was partnered with our old friend Terry Melcher. Gram became a regular visitor to Melcher’s Benedict Canyon home, where the self-destructive pair worked on songs together, with Gram on guitar and Melcher on piano. John Phillips became a close associate of Parsons at this time as well. In late October of 1970, Gram went to A&M and signed out the master tapes of ten songs that he had recorded with Melcher; those tapes were never seen or heard again, as seems to happen from time-to-time with recordings made with Melcher. During roughly that same period of time, Parsons was busted with a briefcase full of prescription drugs.

There are many who claim, by the way, that the musicians under examination in this series were relentlessly persecuted by agents of the state, ostensibly to silence their voices of protest. But if that is true, then why is it that on more than one occasion when the state seems to have had solid evidence of crimes that could bring prison time, no action was taken? ... John Phillips, busted for wholesale trafficking of pharmaceuticals, was, by his own account, "looking at forty-five years and got thirty days." He began serving his sentence on April 20, appropriately enough, and served just twenty-four days – in a minimum security prison.

As July of 1973 rolled around, a series of tragedies befell Parsons and the people around him... According to Fong-Torres, "Around the same time that Clarence White was killed, Sid Kaiser, a familiar face in the Los Angeles rock scene, a close friend of Gram's and, not so incidentally, a source of high-quality drugs, died of a heart attack." Just after those two deaths, "In late July 1973 … [Gram’s] house in Laurel Canyon burned down."

How Gram Parsons died is anyone's guess. There are as many versions of the event as there were witnesses to it....Details of the incident – such as how long Gram had been left alone, whether he was still alive when discovered, who made that discovery, etc. – were wildly inconsistent in the accounts of Fisher, McElroy, and Frank and Alan Barbary (the Inn's owner and his son, who were also witnesses, and whose accounts conflicted both with each other and with the girls' accounts).
At the hospital, police spoke briefly with the two girls and then released them. Within two hours, Phil Kaufman was on the scene to pick up Fisher and McElroy. Bypassing the police and the hospital, Kaufman went directly to the Inn, which the girls had returned to, and quickly hustled them straight back to LA. Police never spoke to either of the women again, despite the conflicting accounts and the open question of what exactly it was that killed Gram.

On the autumnal equinox of 1973, Kaufman and Martin, driving a dilapidated hearse provided by McElroy, arrived at LAX to claim the body of Gram Parsons. Apparently no one, including the police officer who was nearby, found it at all unusual that two drunken, disheveled men in an obviously out-of-service hearse (it had no license plates and several broken windows) had arrived without any paperwork to claim the body of a deceased celebrity. In fact, according to Kaufman’s dubious account, the cop even helped the pair load the casket into the hearse – and then looked the other way when Martin slammed the hearse into a wall on the way out of the hangar. Kaufman and Martin then drove the body back out to Joshua Tree, doused it with gasoline and set it ablaze.

The more of these stories you hear- the more you wonder where the police were at all in L.A. in the 60's....

even the arrests you hear a bout - never seem to stick - people went in and out of that jail like it was a the food court at the mall...

This story always struck me as very very odd...

either the police were really bumbling idiots...

Great Stuff Patty- I LOVE this subject matter and cant believe I never came across any of this before???

But I am thrilled I have now :)

Thanks for the heads up!

I first ran across the Gram Parson's "bodysnatcher" story when looking up Phil Kaufman a couple of posts back. Kaufman describes escaping from police in a vehicle at one point because he's "unencumbered by sobriety". There is at least 1 interview of Kaufman on YouTube.

There are several vids of Gram Parson's on YouTube. Here's a link to the Flying Burrito Brothers version of Christine's Tune.

Finally, there is some type of documentary vid of Meredith Hunter being stabbed to death at the Rolling Stones free concert at Altamont, both the gun and the knife are apparently visible, Altamont Stabbing.

Patty has more in store.

Thanks Matt- I always do...

Sunset- I have a copy of the Altamonte fiasco on video- its called Gimme Shelter- its a documentary and they circle the hand with the knife and stop camera just prior to the stabbing...

Yes, the one where Michael Shrieve from Santana tells them what happened. Awesome footage.

I just looked, "Gimme Shelter 1970" is posted on YouTube.

Wikipedia gives many details of the Altamont free concert,

"The event is best known for having been marred by considerable violence, including one homicide and three accidental deaths: two caused by a hit-and-run car accident and one by drowning in an irrigation canal. Four births were reported during the event.[4] Scores were injured, numerous cars were stolen and then abandoned, and there was extensive property damage."

Plus many other details.

There's a movie called Grand Theft Parsons that gives a highly fictionalized version of the whole Kaufman body snatching story. Check it out if ya get a chance.

The more Patty reads, the more she's sure that The Family was part of something much larger.

When Charlie refers to his having had a "partner," who would that have been?

So many questions, so little time.

From Phil's Book - "When I read the name of the perpetrators and their accomplices, I realized that I had sex with every one of those murderesses."

"either the police were really bumbling idiots...

"The trike that Johnny Knoxville uses in the film is the original bike that Phil Kaufman used in 1973."

"The jacket that Johnny Knoxville wears in the movie is the same jacket that Phil Kaufman wore when he burned the body."

I must admit it looked pretty realistic when Knoxville rolled up on the Harley Trike in front of a recreation of Kaufman's house, the one I just seen a pic of about 2 days ago, the one with the 2 eagles in front.

If Kaufman had sex with Charlie's "murderesess" and escaped as unscathed as he did, he was lucky indeed. Other people that owed a "debt" to Mr. Manson didn't fare nearly as well.

I always thought there would be a film bio of Gram Parsons. His 'Grievous Angel' remains my all-time favorite country album. His harmonies with EmmyLou Harris are spellbinding. The guy was an interesting dude - Southern aristocrat, Harvard educated, he had some chops.
Musically speaking, ol Charlie would look like a cartoon character next to someone like Parsons. It's no wonder Melcher had but a passing interest in Manson's music.

yup Patty, or Havuhd as it is pronounced in Boston.
Parsons was a trip, worth reading about.

Further connection with Altamont and the film "Gimme Shelter." In "Gimme Shelter," the Hells Angel who takes the microphone during the Jefferson Airplane set is Mr. Bill Fritsch aka Sweet William aka Tumble aka the boyfriend of poet Lenore Kandel. In Kenneth Anger's short film "Lucifer Rising," Mr. Fritsch appears with Mr. Bobby Beausoleil (and Lenore Kandel), smoking a skull pipe. I don't feel like double-checking my copy of Ed Sauders' "The Family," but isn't Beausoleil described as smoking a skull point at some point in that book?

They met at the spiral staircase and he was smoking a skull- bowl...

That is an interesting fact though- I did not know...

I wonder if anyone has ever done "Six Degrees of Bobby B."?

Folks I just finished a mighty fine read on Gram Parsons I brought a copy here real cheap hardback $12 bucks and free postage.
I liked it so much I purchased 2 more as gifts.

Twenty Thousand Roads
• Born to a wealthy Southern-Gothic family of alcoholics and suicides, Parsons possessed an outsized appetite for self-destruction and a singular genius for the American sound. He led the Byrds to create the first country-rock album, founded the acclaimed Flying Burrito Brothers, and taught the joys of American roots music to Mick Jagger, Keith Richards and Emmylou Harris. His second solo album, Grievous Angel, remains a masterpiece of country soul. Before it was released, Parsons, aged 26, - brilliant, glamorous and doomed, died of a heroin overdose. Twenty Thousand Roads paints an unprecedented portrait of the man who brought together country music and rock and roll, dispelling the myths and telling a story even wilder than the mythology. Drawing on profound knowledge of the era's music and hundreds of interviews - many with friends, musical partners and lovers who have never spoken before - author David Meyer creates a compelling biography and a rich history of a crucial period in American style, drugs and rock music. Meticulously researched and masterfully told, Twenty Thousand Roads is a dazzling evocation of an artist, his music and his times.

Christine's tune is a song about David Crosby's girlfriend who was killed when she was taking her kittens to the vet and she collided with a school bus in Northern California.

I agree about the David Meyers book- one of the best. Chock full of info- almost like reading a history book....can only read a few pages at a time to absorb everything.

Another interesting book about Gram just recently came out "Breakfast in a Nudie Suit" written by Ian Dunlap who was in the International Submarine Band with Gram. He was also the person that Gram went to visit after he was kicked out of Nellcote by Keith and Anita.

There is a DVD that I believe was put out by the BBC where they interview Emmy Lou, Gram's half sister, Bonnie and others. Unfortunately, this has never been released in the US so will not play on my DVD player. Would love to see this documentary.

The Flying Burrito Bros played the first and only peaceful set at Altamont. Their Six Days on the Road, with Gram on vocals, is on Youtube and also featured in Gimme Shelter. They missed playing Woodstock due to being on a train tour at the time, so Altamont seemed like a good idea at first.. More tough luck for the Burritos.