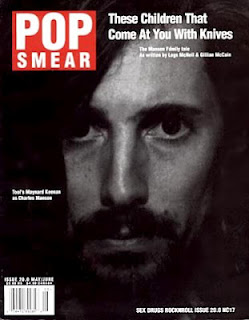 Do you remember that pictoral of Maynard from Tool as Charlie? Well, here is everything you ever wanted to know about it. Incidentally, it is also very hard to find now.

From http://toolshed.down.net/articles/index.php?action=view-article&id=April_1999--Rocktropolis.html :
Publication: Rocktropolis (April, 1999)
Transcribed by Ean (TinyGuyE@aol.com)
title: Tool's Keenan Depicts Charles Manson In POPsmear
author: Carrie Borzillo Tool's Keenan Depicts Charles Manson In POPsmear
The 15-page These Children That Come at You with Knives, which was written and directed by noted author Legs McNeil (Please Kill Me) and co-written by Gillian McCain, will appear in the May/June issue of the magazine, due on stands May 10. A fumetti is a comic-book style layout with still black- and- white photographs accompanying drawings and a script to tell the story. 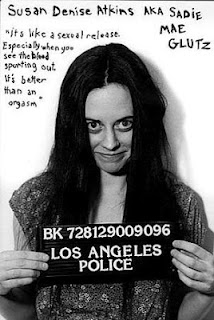 Maynard himself moved out to the desert. Arizona though. I read that he likes to shoot at people who trespass on his property with a paintball gun. Interesting guy.

Thanks for the link. The images kind of disturbed me a little. :(

No prob! The pic of Jay Sebring kind of looks like he is about to be shot by Jim Morrison. Just made me think about reading the book "Jim Morrison: Life, Death, Legend" it states that Morrison had been interviewed by the police after the murders because he had been overheard talking and the murders before they happened. Another chapter discusses a night in 1968 when Morrison brought into the studio a musician named Wes (Charlie Manson vibes) and one of the Manson girls. It doesn't say which girl it was but apparently she was in a pill induced stupor and was giving up backdoor services to whomever was interested.
Sorry to kind of wander off topic!

I've always wondered if the TOOL song "Eulogy" might have been influenced by the whole Manson saga. I'm not sure how much MJK was "into" the whole Manson story, but the lyrics could definately be about these sad group of people

TOOL is one of my favorite bands!

Pattys not sure if you can do that but you can post a link to them. Matt, is that right?

Yes you post links if you can utilize html tags. No pics, though.

Bill, just send them to Patty and she'll figure something out for you.

They are suppose to go into the studio super soon.

Bee Grass said...
They are suppose to go into the studio super soon.
Sweet!

In another lifetime, I actually knew Chloe Webb when we were kids Close as I've come toThe Family.