My husband and I road tripped through WV last week and in our travels found Manson's childhood home in McMechen, WV. I am including the pics. My husband thought I was crazy but he agreed to look for it and we found it! 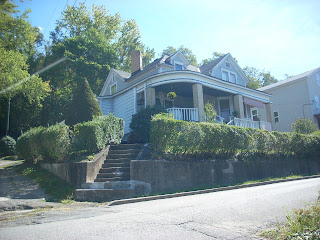 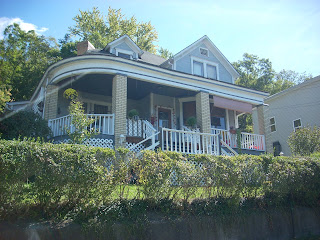 not what I would have expected..

although I am sure the site looked much different back then. I would expect a run down looking small place after all I read about his childhood.

It was the home of his Aunt & Uncle whom he was sent to live with for a time.

According to Charles Manson - Biography on A & E (1987), that certainly is the right house.

That's nicer than my house!

@Suze, I just got back from my parents' house and I thought the same thing.

Just looked at a map. I would have thought his family would live down by the Ohio state line close to Kentucky since he was born in Cincinnati. McMechen though is way up in the panhandle near Pittsburgh, PA.

Seems like I remember Manson going back to McMechen when he got out of reform school and that is where he met and married Rosalie? Correct me if I'm wrong. If I had more time, I would have done some research at the local library or court house for public records regarding him.

I believe you are correct, Heidi.

He was parolled from the Federal Reformatory at Chillicothe, Ohio in May of 1954. A parole condition was that he live with his aunt and uncle in West Virginia, but he moved in with his mother shortly afterwards.

In January 1955, he married Rosalie. What I'm not clear on is if this was in McMechen or elsewhere.

Is this where Charlie lived when someone made him go to school wearing a dress?

wow~! its a gorgeous house! i would live there and be happy forever- i love how it on the hill and it has a nice porch. my dad lives in wheeling wv

I've lived in the Glen Dale/Moundsville area all of my life, about 5 minutes south of McMechen and have looked a few times for this house but can't seem to find it! I cannot find so much as the street name anywhere online and folks around here are pretty tight-lipped when it comes to speaking about Manson. Does anybody know what street the home is on? Thanks in advance!

Hi Pamela. I contacted the person who took the pictures. This is what she said:

"The only thing I remember is that the house was on the side of town that isn't as close to the river. The only reason we found it after looking forever is because of the curved roof over the porch. Also it's up on a hit of a hill. Crap I totally should've written down the address! Wish I could help more."

Pamela you might have some luck finding out the address by going to the local library and looking in an old telephone book or city directory for the Aunt and Uncle, William (Bill) and Glenna Thomas.

Ok thanks very much! I got a tip of the street name, hopefully it is correct. Going this week to try and locate it.

Pamela, I live in McMechen and know the owners of this house well. If you find the Bishop Donahue High School , just look up the street ( east) and you can't miss it.

Btw, I ended up finding the house this past Spring. A lovely home.

I think I found it on google earth, based on the unique shape of the roof, and some of the clues in the previous comments. Unfortunately it doesn't appear the Google Earth car traveled down the side streets of McChechen, WV. The address is 400 Caldwell St, the corner house on the southeast corner of 4th St and Caldwell.

I lived in Mc Mechen until I was 14. The house you are talking about there is a steep road you have to go up off of Main Street. There was a small store and the owners of the store lived up stairs.

Hello,Im from McMechen and lived 5 homes away from Mansons Aunt and Uncles home. Unless their home has been remolded since I moved away then the home in the picture is not their home.
By no means was theirs a bad home in fact it was quite nice.
I vividely recall Charles chasing us, my 1st cousin and I down the street. He was a very scary person to say the least. Even then my father told us that the "boy" seemed to have emotional issues and stay away from going that way when we went for a walk.

My grandparents lived on Caldwell Street in Mcmechen only 5 homes away from Mansons Uncle and Aunt. Unless their home was remodled over the years then the one in the picture is not their home. Im not saying that they had a bad home. In fact it was very nice. Im only saying that the way the house in the picture is facing is all wrong to be the correct home.
I vividly remember Charles standing under the big front porch staring at my cousins and I as we walked past the house on our way to the corner market. My father told us that the man appeared to be disturbed and we should go the other way when we went to the market for treats.

This is for sure his house. I should know because I have lived in that house my entire life. We have a letter from Charlie and he says it's that address. Can't tell you how many pair we spot from out of state taking pics and checking it ok over the years.

Tell them Casey! Caldwell St. Kobasko here.
But after some time, he did live in 40 15th street, Mcmechen. After living on Caldwell.

thank you for all of the info. very interesting!! Casey, i bet it does get annoying at times, having strangers drive by,snapping photos. out of curiosity, ive driven by myself once or twice. i mean no harm!