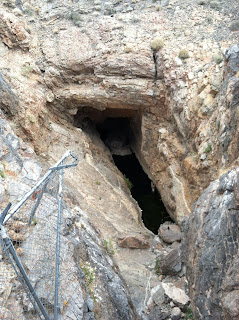 Posted on26 October 2012.
Special to the Pahrump Valley Times

AMARGOSA VALLEY — A September population survey of the endangered Devils Hole pupfish produced a count of 75 fish, a drop from 119 counted in the fall of 2011.

This number is considered to be an indicator of the actual population size based on a methodology that has been in use for 40 years. The iridescent blue, inch-long fish’s only natural habitat is in the 93-degree waters of Devils Hole, which is a detached unit of Death Valley National Park.

Biologists conduct surveys of the Devils Hole pupfish, Cyprinodon diabolis, twice each year, in the fall and spring.

The short-lived species has a lifespan of approximately one year and experiences a natural high and low cycle, with the population in the fall being greater than that in the spring due to natural die-off during the winter months.

“We continue to be concerned about the status of the population, which has generally been declining since 1997,” said Ted Koch, state supervisor for the U.S. Fish and Wildlife Service. “The good news is, the fish the biologists saw appeared to be quite healthy.”

In the fall of 1997, the population surveys started to indicate a downward trend for unknown reasons, reaching an all-time low of 38 fish in the spring of 2006 and 2007. The Devils Hole pupfish was listed as endangered in 1967. Although the cavern is over 400 feet deep, the pupfish are believed to have their greatest spawning success on a shallow rock shelf just beneath the water’s surface.

While biologists will not speculate about the cause of the population decline, they believe the count might have been influenced by three natural events that took place this year. Violent pressure waves occurred in Devils Hole in March 2012 from an earthquake in southern Mexico measuring magnitude 7.4, and a magnitude 7.3 quake in El Salvador in August.

Also in August, heavy rains washed a substantial amount of dirt, rocks, and other debris onto the shallow shelf and deeper into the hole. Although these are natural events, they occurred in a short time frame and created unique conditions that were possibly stressful for the pupfish.

Nonetheless, biologists have observed increased spawning behavior after such disturbances. Earthquakes have the tendency to remove material from the shallow shelf that is important for feeding. Conversely, floods bring much needed nutrients into the ecosystem.

Devils Hole is a detached unit of Death Valley National Park located on the Ash Meadows National Wildlife Refuge. It is managed by the National Park Service, while the U.S. Fish and Wildlife Service and the Nevada Department of Wildlife coordinate with NPS in the protection of and recovery efforts for the Devils Hole pupfish. The main objective of the agencies is a continued focus on the native population and its ecosystem.

Thanks to Grump for the tip!

Fascinating to me that a mild quake in El Salvador could affect the ecosystem of the Devil's Hole in Nevada. Goes to show how interconnected everything is.

Good article. I never though any fish could survive in that hot environment.

Runoff from the underground city's chocolate fountains is probably killing them off.

And the poopfish love Patty.....

matt the great san francisco earthquake of 1906 was a 7.8. those were not moderate earth-quakes, i wouldn't want to be anywhere near a quake of those sizes. the distance though that
is really interesting.

Boy, everyone was so well behaved! I expected remarks about Sadie and CLem diving in!

BTW - divers go in and physically count them.