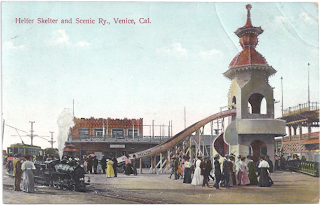 Back in the early 1900's when Venice California was founded it had a very elaborate boardwalk called Midway Plaisance.  At the main entrance was an attraction called Helter Skelter!  I found an old 1909 postcard at ebay and snagged it.

"All that Manson stuff was built around Paul’s song about an English fairground. It has nothing to do with anything. But, I don’t know, what's 'Helter Skelter' got to do with knifing somebody?" – John Lennon

"I was using the symbol of a Helter Skelter as a ride from the top to the bottom, and this was the fall, the demise, the going down." – Paul McCartney

"Helter Skelter means confusion. Literally. Confusion is coming down fast. If you don’t see the confusion coming down fast, you can call it what you wish. It is not my music. Why blame it on me? I didn’t write the music. I am not the person who projected it into your social consciousness." – Charles Manson


I sincerely doubt that anyone in the Manson Family would have known about the attraction in Venice, it's just one of those weird coincidences.

The definition of helter-skelter is indeed "disorder, chaos, haste, confusion."

But this is quite funny.