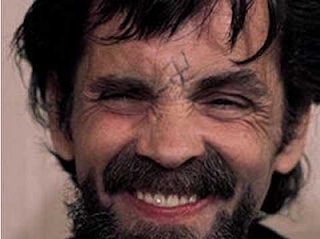 There's a new book coming out about Charles Manson, "Manson: The Life and Times of Charles Manson" by Jeff Guinn.  This one has an enormous lead time as it's not due out until August 2013.  It has a couple of things going for it.  It promises new information on Charlie and it is being published by the major publishing house, Simon and Schuster.  Major publishers generally insist on sourcing and fact checking so hopefully this new book will not leave anyone wondering what is true and what is not.

If your a collector of Manson related books the pre-order price is reasonable and you'll be assured of getting a first edition.

Here's the blurb from Amazon-

"Release Date: August 6, 2013
Based on new interviews with previously undiscovered relatives and filled with revelations and unpublished photographs, this is the most authoritative account of the life of Charles Manson. After more than forty years, Charles Manson continues to mystify and fascinate us. One of the most notorious criminals in American history, Manson and members of his mostly female commune killed nine people, including pregnant actress Sharon Tate. Now, drawing on new information, bestselling author Jeff Guinn tells the definitive story of how this ordinary delinquent became a murderer. Manson helps us understand what obsessed him and, most terrifying of all, how he managed to persuade others to kill. Guinn interviewed Manson’s sister and cousin, neither of whom has ever previously cooperated with an author. Childhood friends, cellmates, and even some members of the Manson Family have provided new information about Manson’s life. Guinn has made discoveries about the night of the Tate murders, answering unresolved questions, such as why one person on the property was spared. There are even photographs of Manson’s childhood and youth that have never previously been seen outside private family albums. Putting Manson in the context of his times, the turbulent end of the Sixties, Guinn shows how Manson represented the dark side of a generation. He came to Los Angeles hoping to get a recording contract, and the murders were directly related to his musical ambitions, although he cloaked them in a bizarre race-war theory. He was, in the words of one person who knew him, just like many other rock star wannabes—except that he was a killer."

Interesting. I'll probably read it, when I have time. I just started reading Restless Souls, I have been so busy with getting my Masters I haven't read a book since August, which to me is forever.

I don't remember Charlie having a sister. Anybody?

Doesn't sound like they interviewed The Man himself, who will tell you that he didn't kill anyone, let alone for a record contract.

The sister was adopted by Charles's mom much later in life.

I can't imagine that after the 2nd edition of "The manson file" that there is anything new to be said.

Thanks for that AC. So, the old lady couldn't wait to get rid of Charlie. Then, years later, went out and adopted a girl.

I did not know the sister was adopted. It's tough to understand how a woman with Manson's mother's record would be allowed to adopt.

as far as i know manson has never actually met his adopted, much younger sister.

In many of Charlie's photos it looks like he's wearing a poorly fitting plate to provide him with a top front tooth. Maybe he finally got one that fits or, maybe he's holding it just right.

I have always believed that many of the characters in the Manson saga "weren't talking" because they hadn't been approached properly, or had just been approached by wackos like Bill Nelson. This author is a real pro so it will be fascinating to see what he turns up.

candy and nuts said...
and insofar as sexually jealous and jewish women-this definitely sounds like Star or one of her groupies writing this-the typos dont help your case either

Candy, that is likely Greywolf - An uneducated old twit crying out for help. Best just to ignore. Once the gang checks the blog they'll probably delete him anyway. I hope so.

Suze I'm inclined to leave him up. It shows him for the deluded archaic twit that he is and it's a good counterbalance to the seemingly benign crap he has Star post on their website.

Grey is what 70 at least ( or more?)- this looks like someone in 3rd grade typed it

Censorship is the suppression of speech or other public communication which may be considered objectionable, harmful, sensitive, or inconvenient as determined by a government, media outlet, or other controlling body. It can be done by governments and private organizations or by individuals who engage in self-censorship. It occurs in a variety of different contexts including speech, books, music, films and other arts, the press, radio, television, and the Internet for a variety of reasons including national security, to control obscenity, child pornography, and hate speech, to protect children, to promote or restrict political or religious views, to prevent slander and libel, and to protect intellectual property. It may or may not be legal. Many countries provide strong protections against censorship by law, but none of these protections are absolute and it is frequently necessary to balance conflicting rights in order to determine what can and cannot be censored.

Neither does Suze, but Deb has a point. He's an old fart Charlie wannabe. Pathetic...

Patty may have been wrong to do it but she will take the heat. Sorry ladies for the unpleasantness.

No heat from me Patty! I can see both sides of the situation. What cracks me up is first Greywolf and Star don't use their given names to the stuff they spew on their website and then Greywolf comes here and uses another phony name! The man must not have any cajones, IMO. If your going to spew it then own it.

I don't know, candy. I've seen Hexjoe's rants before they get deleted. He rails about Jews being the root of all evil. Doesn't add up to me.

Doesn't matter who he is, really. His anti-semitic and misogynistic comments get deleted. If he contributes without insulting anyone they remain untouched. I think he's on like a 95% kill ratio, though. Haha...

You are welcome here, candy.

It really doesnt matter if any author or tv reporter interviews "the man himself" he will retort saying they skewed his words, edited ,deleted, etc if MAnson wrote a book himself he would accuse himself of skewing his thoughts so what is the point and no he didnt kill anyone ( he tried and failed -shooting Crowe-and if you have seen the slice Gary Hinman had ) he defintely tried attempted to kill because hes not a good shot and the people lived proves one more failure to the man, tha gangster the shaman

I just found this blog and appreciate all the new info. I've been interested in this case for years, but haven't read about it in a few, so I've been reading off and on all day...lol
Anyway, I just wanted to point out that Jeff Guinn also wrote a book about Bonnie and Clyde that was heavily criticized by people in the know about B&C, so I'm not sure how good this Manson book will be. I can't remember the details of what he was accused of exactly, but I'm sure it can be Googled if anyone is interested.