Hi Liz (if it's ok to address you as such), I've been reading some of your blog for a couple weeks,looking for specific information regarding a list of weapons that were seized during the Spahn and Barker ranch raids. Main reason was while I was stationed at Camp Pendleton(Ca) there was a report of  someone stealing grenades and other armament. The only people having access to the armory would have been Marines(to my knowledge). Any help sure would be appreciated...... 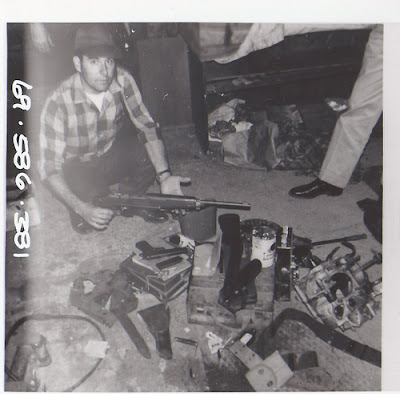 The grenades are mentioned on pages 465, 515, and 516 of Helter Skelter, Kindle version. I don't know whether the pages match up with the printed copies or not. Neither did I see mention of whether the family member who worked at the base was hired before or after the raid.

Weren't TJ and and another family member former Marines? They could have still had connections to the USMC.
I was stationed at Camp Pendleton (Del Mar) back in the day. Those Marine Corps armories are tighter than a frog's ass. But, anything is possible.

There's a post at Cat's site mentioning 4 Marines with ties to the case. http://truthontatelabianca.com/threads/polygraph-pages-25-49.1819/page-2#post-49413

I found a couple of old articles on the subject of weapons being stolen from military bases. A Nov. 16, 1969 SF Chronicle says that bunkers at Ft. Cronkhite had been broken into at least four times previous to the writing of the article with 52 weapons having been stolen. Both automatic and semi-automatic rifles and pistols were taken.

Another article written April 1970 cites Defense Department Chief Deputy Atty. Charles O'Brien as saying that the stealing of arms from military installations including machine guns, bazookas, hand grenades and extremely powerful plastic explosives was epidemic, adding "it's beyond our power to control."

The article goes on to say that the arms were ending up in the hands of militant groups such as the Weathermen and Black Panthers and that there was a link between arms and drug trafficking with drug dealers telling buyers that they would rather be paid in guns than cash. This detailed of an article indicates to me that thefts from military bases must have been going on for some time prior to the publication of the articles.

So, it seems that military bases were not all that secure and leaves the possibility that some of the weapons confiscated at the raids could have come from that source.

James Willett was a marine. Did he know something, perhaps?