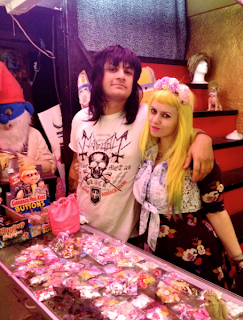 Tucked away behind rows of old records, sits a sign that reads "Charles Manson". If you entered the store not knowing about the Manson thing, you would miss this needle in the haystack. It's understated to say the least. And yet, without question, Beauty is Pain has become famous specifically for it's connection to convicted mass murderer, Charles Manson.

Vasquez maintained an interest in Manson's story long before he was able to get his hands on a tape of previously unreleased songs by Manson. He acquired them through a friend (also deeply interested in Manson's story) who obtained a storage unit of items which included Manson music, photographs and drawings. "

I believe the young lady has the yellowest hair I've ever seen.