Forty years after the Witches of Mendocino were arrested Charles Manson wrote a letter to the editor of the Anderson Valley Advertiser in Boonville CA.  The newspaper had never received any other letters from Manson before this one.  Here is the letter as it appeared in the newspaper. 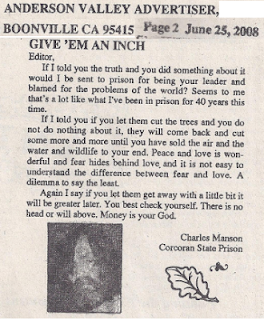 I contacted the editor of the newspaper and asked if he would be willing to let me have a copy of the letter Manson wrote and he agreed!  I expect that Manson has caused a few editors to have a WTF moment when it came to editing his letters. 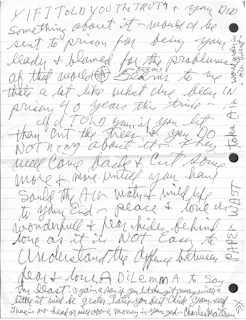 And here is the envelope the letter came in, I was sent B&W copies. 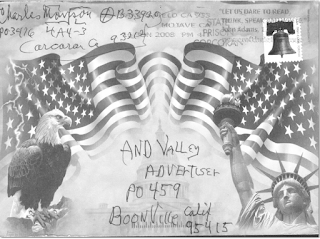 A couple of weeks later Kenny Calihan, Manson's prison buddy, also wrote a letter to the AVA.  Enclosed with his letter was a prison form of Manson's that Manson signed, I guess to show the newspaper that he really was a buddy of Manson.    I'm not at all familiar with what this form is all about but it seems to be called an ANNUAL/PRE-MERD REVIEW.  If anyone knows what this form is for, please, do tell! 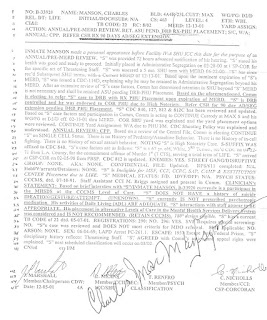 The Zodiac/Manson conspiracy theorists should note the Zodiac symbol on the return address of the envelope.

This is a form about moving him out of segregation back into his normal cell in protective housing. Far as I can tell.

LH Thanks for that! One of the things I got out of that report is that Manson is not on any psychotropic drugs.

Kenny Calihan still in prison or he released?

I did a search here, and could not find him still in the system: