Someone we know will be on Ghost Hunters tonight

The season premier of Ghost Hunters on SyFy is tonight. Someone will be on who you will recognize from Eviliz. However we cannot tell you who, or what it's about. And no, we won't tell you if you guess correctly, you'll just have to watch. 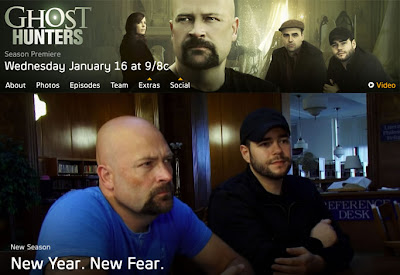 Steve Hodel lost all credibility with his second book, when he also accused his father of being the Zodiac. Scott Michaels' Dearly Departed Tour takes you by the Snowden House and declares it the BD murder location.....like the case has been solved.... Talk about presumptuous.
The main competing theories are Donald Wolfe's (Bugsy Seigal had a skid row bum murder Beth Short because she was carrying his baby), and Larry Harnisch's (a whacked out surgeon who lived nearby murdered BS because???).
Steven Kay has endorsed the Hodel theory and declared the case solved. James Ellroy, the author of the novel "BLACK DAHLIA" first endorsed Harnisch's theory and then switched to Hodel's. Woody Guthrie was even a suspect for a short amount of time.
My guess is you're referring to Kay.

Woody Guthrie? Are you kidding? I wonder if Beth Short was Arlo's mother......

And we know how credible Steven Kay is...

Hey hey Scott Michaels has been an idol of mine for 8 years since I was 11. Lets not disparage him.

for what it's worth i believe john gilmore got it right in "severed" and the killer of the black dahlia is arnold smith.

I watched it but fell asleep about half way through it.

Who was our mystery person?

Doc, although the person we know was filmed and told the new information regarding the case would be included in the show, it was taken out at the last minute without anyone's knowledge. The information was so controversial, that they took it out.

The new information regarding the case had nothing to do with ghosts or the paranormal, but hard investigative and scientific facts.

The information will come out in another venue.

Hi Lauren,
I like Scott Michaels too. Had a great time on the Dearly Departed tour and would highly recommend it to anyone. My only complaint was that they present the Snowden House as the murder location of the BD. While George Hodel may be a viable suspect, this case is still unsolved. There is a reason Hodel was never charged with her murder, and it wasn't because he left the country as the Ghost Hunter show indicates. Steven Kay claims he could get a conviction on the evidence that Steve Hodel presented to him. The lead detective in the still open case claims bullshit. He says he would be laughed out of the DA's office if he presented Steve Hodel's case.

I never knew about Woody Guthrie being a suspect. That is incredible.
Sometimes, I like to entertain the notion that Howard Hughes was the Black Dahlia killer. Hey, why not?

jeffery jeff, have you seen James Ellroy's Feast of Blood? It's on Netflix instant play. Ellroy and some friends sit around in one scene discussing the black dahlia case and I think that is where Harnisch talks about the dr who lived near by. It's interesting, but I'm not sure it's right. I read Severed and Black Dahlia Avenger(the book where Hodel claims his father was the murderer) and think Gillmore was probably right.

oh, and when I was on Dearly Departed the house was presented as "possible sight" of the murder, but the tour guide said he doubted it. No it wasn't Scott(who is a friend of mine)it was another guide(also a friend).

Not much to the Woody Guthrie suspect story. Woody was sending Dahlia newspaper clippings and explicit drawings to a woman in NorCal. The woman became alarmed and notified the police. Woody was cleared because he was not in LA at the time of the murder. They did bust him for sending explicit materials through the mail, though.

Yeah Stacey, I've seen Feast of Blood. Ellroy, Nick Nolte and a few old cops sitting in the Pacific Dining Car listening to Harnish spin his tale. Ellroy tells Nolte "this guy has solved the Black Dahlia case". Interesting how a couple of years later Ellroy endorses Hodel's theory in the forward to BD Avenger. I haven't read Gilmore's book, but he names the same suspect that Donald Wolfe does.

I took the Dearly Departed Tour in October 09 and the tour guide was Richard. He didn't use the words possible or alleged when referring to the Snowden House as a murder site. When the tour stopped for a bathroom break, I approached Richard and asked him if he knew about Steve Hodel's new book accusing his father of being the Zodiac. He didn't, but he was pretty incredulous about the accusation. I wonder if DDT changed their dialog about the case after Hodel blew his credibility. When did you take the tour?

I took it in November of 2011. I took it with Brian. He presented the house as the murder sight IF the Hodel theory is true. He has a copy of Severed on his tour bus and recommended it to some others on the tour. Brian also mentioned the Steve Hodel thought his dad was also the Zodiac Killer....