Linky Dink on a Brotherhood Article 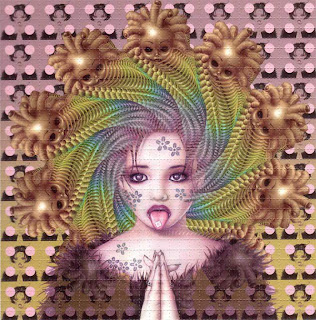 Our German friends sent a great link to an article on The Brotherhood.  Thank you Deb for the translation to English.

LSD propagandist Timothy Leary was public relations agent of a drug ring. Mendel with psychedelic drugs was controlled by established businessmen.
He has compared himself to Jesus, Gandhi, and Socrates and the "alchemist of mind" been counted. As "sacred group of people," he felt, however, the drug dealers: the noise because of his controversial experiments outcast from Harvard University psychology professor Timothy Leary, 53
Just three years ago, was as Leary escaped under mysterious circumstances from a California prison and sought asylum in Switzerland, intellectuals from many countries made strong in petitions for him. Everyone believed Leary had for its spread in articles, lectures, books, cult practices and records message only honorable unselfish motives.

A trial in San Francisco, hearing of an American Senate committee and research of the New York weekly newspaper "The Village Voice" now brought the truth about Drogenpropagandisten the day: The he led, religiously disguised "Brotherhood of Eternal Love", supposedly a non-profit organization, was one of the biggest has become known narcotics production and distribution equipment, Leary the PR agent for a gigantic business.

Always the underground Messiah had shown the supposedly mind-expanding drugs as a "medium of the boys" and their opponents as "forces of the authoritarian middle-class establishment". LSD, he wrote, would - in a way for friends of friends - "produced in homes and small laboratories." In fact, the illegal trade in psychedelic toxins for many years was in the hands of members of the financial oligarchy.

On behalf of business managers finer origin and best training smuggled the "brotherhood of eternal love" after police investigation for a while weekly hashish and marijuana valued at $ 4.3 million in the United States, stocks for nearly eight million dollars was secured two years ago.
When the U.S. Federal Police in January last year closed the largest laboratories probably the "brotherhood" in St. Louis, she found 50,000 completed pressed LSD tablets and powder for an additional 14 million shares.

Production was discontinued in part by the rockers gang "Hell's Angels", in all parts of the United States and approximately 20 non-American countries: in addition to about 100 other narcotics such as peyote and cocaine, especially high-quality LSD pills with the brand name "Orange Sunshine" the Timothy Leary praised.

With the high finance of LSD professor had already come into contact after him to Harvard University had dismissed the 1963rd For (often paid) nominal rent of $ 500 and Leary found his refuge in the church 55-room castle of the young millionaire William Mellon Hitchcock, then 23, on whose property weitläufigem Millbrook, New York.

Hitchcock was one with annual revenues of between five and seven million dollars to one of the richest families in America, which controls, among other large companies, the Gulf Oil Corporation. Businessmen of his stature, the U.S. journalist Mary Jo Warth had, in LSD "a dream product see: create quick and easy" with low cost, low investment and the possibility of huge profits. "
The financial magnitude of the business itself may Leary might not have been aware. By religious posturing as the foundation of a psychedelic religious community, controversial comments ("LSD is like Russian roulette"), conflicts with the narcotics authorities and sex orgies in Millbrook he considered the product but over years in the headlines.

Measured against this enormous publicity the advertising costs were insignificant. The "Brotherhood" paid in legal disputes Leary defenders and after his conviction to funded (at most) ten years imprisonment by the left-wing underground organization "Weathermen" puts into effect escape from the prison in San Luis Obispo - allegedly with $ 50 000.

Hitchcock that the unidentified "number one man of all hashish or LSD operations" (narcotics officer Lloyd Sinclair before the Washington Senate Committee) was as the "Village Voice" suggests, is not proven. The prosecutor's office in San Francisco has bought his willingness to testify in the LSD process with the assurance that they have no case against him.

To his close relationship with the drug ring, however there is no doubt. His confidants were next to a Swiss private banker and a temporary chief of the time of Bernie Cornfeld's controlled release "Fiduciary Trust Company" in the Bahamas, the top dealer of the "Brotherhood". Your estimated at $ 200 million profit was partly spent on land and partly in legitimate businesses "washed" (mob parlance) and partly transferred to Swiss bank accounts.

With Timothy Leary's demise, his escape by North African guerrilla quarters, the Swiss Underground and hashish into paradise Afghanistan (where he was arrested in January 1973) also ended the happiness of LSD Syndicate.

After "Brotherhood" messenger in Lebanon and on the Los Angeles airport with 800 pounds of hashish and 100 000 in Switzerland raised "hot" blew up dollars and in Idaho one of LSD manufacturing specific device had been confiscated, the police arrested more than 100 suspects. Part of it was sentenced to prison up to 20 years.

Hitchcock ("It was fun to hear out the establishment in the face") came first in a New York court for tax evasion with a suspended prison sentence for probation · them for five years and $ 20 000. "But you just do not believe," said narcotics officers Sinclair in Washington, "that our investigations have already been completed."

Timothy Leary, the incarcerated for 15 years in the notorious Folsom Prison. According to "The Village Voice" have announced further statements about his connections to the political background and drug ring in mitigation of punishment if he acquires. Recently he stated that after his release he "never again advertise for LSD or other drugs" wants.

I had a bad week and could go for a dosing. Your never to old for certain things.

No, I had it drafted in German and she did what I assume is use the Goggle translator. I do know she speaks fluent "Manson jive" and Japanese.

The only times I ever did LSD was when I was alone or with somebody.....