That Charles Manson likes his ZuZu's

How ironic is it that Sara Jane Moore, who attempted to assassinate President Ford 22 days after Squeaky made her attempt, and Charles Manson lived in the same town growing up and frequented the same candy store?  This ought to set the conspiracy theorists atwitter.  I've read a few theories related to Sara Jane and the Family women but none that directly involved Charlie.
Also, the candy man was named Watson!  oo-ee-oo ﻿ 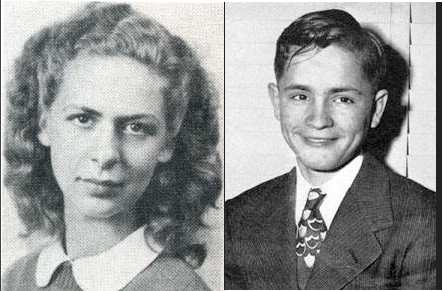 Charleston W.Va (AP) Sara Jane Kahn and Charles Manson bought a lot of candy from Van Watson when they were children.

"Sara Jane was a serious pupil but Manson liked to play a little bit of hooky," says Watson.  Sara Jane, now Sara Jane Moore, is in jail for trying to kill President Ford.  Manson is serving life in prison for the 1969 murder of actress Sharon Tate and six others.  And, one of Manson's followers, Lynette Fromme , also is charged with trying to kill the president, in a separate incident.

"Kathleen Manson, Charles' mother, was a clerk in my store for three or four months," Watson said in an interview Monday.  Charles was about 9 or 10 years old then, around 1942.  He was an ordinary boy, nothing outstanding, I sold him a lot of candy.   He'd come in two or three times a day, whenever he got a penny."

Watson said he was shocked to learn that Sara Jane Kahn was the person accused of shooting at the president.  "I knew her from childhood," he said.  "She came into the store to buy candy on her way to school.  She was a loner- almost always by herself.  She never had much to say about anything.  She always had a couple of books under her arm and seemed to take school seriously."

The Kahn's lived in a big log house up Woodward Dr. from his store and the Manson's lived in a house across the street from his store.  "I was very much surprised the way those two turned out," Watson said.  "Charles wasn't much good at going to school- he liked to play a little bit of hooky.  But I expected Sara Jane to grow up and become somebody with a good education and a responsible position in life.  I never dreamed she would be somebody who'd try to kill the President."

It is not known whether Manson and Sara Jane Kahn knew each other while living here.

It wouldn't surprise me at all if Manson and Sara Jane's paths had crossed at some point. Life is funny that way.

...
Speaking of zuzus in Damien Echols new book they called candy in his prison Zoe Zoes.
Maybe we should call Candy and Nuts ZuZus and Nuts?

I have a vague memory of a news report back in the 70s that Manson and Moore used to frequent a store together and read comic books.

So the store owner’s name is Van Watson? Really?

More like Van Houten Tex Watson, ‘Mr. Sending Coded Messages Through The Paper In The Form Of An Innocent Candy Store Story’ guy.

Fortunately I could see right through it, because I’m so smart… and paranoid.

No need to look for any conspiracies here since the cause is so patently obvious. Mr. Van Watson, if that really is his name, sold Charlie and Sara candy which turns you into a homicidal maniac or political assassin.

I’m not sure what brand was used, but through personal experience I have managed to rule out PEZ, Squirrel Nut Zippers and Atomic Fireballs. A clear front runner is Horehound Drops, since eating those sparks anger in the heart of the consumer, while lowering the value of life. My work continues.

Too funny, Farf! We are so lucky to have you on the job ferreting this stuff out!

DebS said...
Too funny, Farf! We are so lucky to have you on the job ferreting this stuff out!

I am eating red vine and I feel a little bit angry but the two could be completely unrelated. Come to think of it, I am always grouchy and I always eat candy. Hmmmmm, Farf.

It may be your choice of candy Heidi. Let’s explore.

Red Vines typically come in those limitless plastic barrels or rectangular box with no clear opening. What is one to do? Open from the end making for a noisy and complicated grab at the next vine, or pull the box out of the plastic wrap and risk it falling to the floor and picking up carper threads? Just thinking about that is sort of pissing me off right now.

After doing all that work, it’s time for the payoff with a deep satisfying bite….. hey… WTF… who’s the genius that decided to make these things hollow? My jaw muscle was masterfully set to chew through something with the girth of a pencil and solid. Instead I bit down too hard and thanks to the appearance of the Red Vine, I also over salivated. I’m a finely tuned machine and don’t appreciate this ruse one bit.

Could there be more? Yep, this candy seems to chew back and adhere between my teeth which can’t be removed with fingers or picks. It mocks me while slowly dissolving and reminding me not to smile and betray a Red Vine eating grin. Man, I’m starting to get really irritated and I thought this would pass after yelling at those kids on my lawn. It’s not you Heidi; it may be your choice of licorice.

Here’s a suggestion, try switching to ‘Red Licorice Super Ropes’ and see if that doesn’t let you out of the curmudgeon dungeon.

You read right, a full 34 inches of solid red goodness. Sealed for your safety in a polymer tube which allows one to eat a little, then you can tie it off into a hermetic seal, maintaining freshness and keeping out carpet fur. Who’s the victim here?

I hope this helps Heidi, because I’m all about finding answers to mysteries which have plagued man and woman alike. Happy chewing, emphasizing happy.

HellzBellz said...
Funny though....I did read something on the World Wide Wicked Web about a few weeks ago. But didnt pay atention on the Sarah Moore thing... Now this thread did remind me on it, and I started searching in my Browser history. Its an Intervieuw with Manson in the 90s. If you scroll down a lil there is a ,Young Manson, picture. There they mention the Moore connection too....Here is the URL http://forteanswest.com/wordpress-mu/washingtonlowfi/2010/01/28/charles-manson-freemansonry-meets-mothman/
-------------------------

Thanks for the link, Hellz. I tried to confirm what the person wrote at that website but I didn't have much luck. I could not find a Mound WVa where the writer said that Charles lived and where the market was located.

What I did find by looking in the 1940 census is that the Kahn family along with daughter Sara Jane live at 15 Woodward Ct. in Charleston WVa. Also that Van Watson lived at 614 Patrick St. Charleston, WVa He is listed as the proprietor of a produce market. I'm not sure if he may have lived near or at his market.

So, the writer at that website has some things right and some wrong. I do know that Charles mother, Kathleen is in the 1940 census living at Moundsville Prison as an inmate. Moundsville is in another part of WVa than Charleston.

You welcome DebS. I dont know if the writer is right or wrong....doesnt make a difference anyway. But I find FarFs theory about the candys most interesting.......because that makes Manson innocent. And I wonder why he never used that in his defence, because after all, IF Farf is right, Its the CandyMan who is guilty of the TLB Murders. HE did feed that Homocidal candys to Manson !! ReTrail maybe ?? LOL !!

Excellent book, by the way!!!

sorry i'm coming into the conversation late. i grew up in the town that rose white raised charlie's son, cadiz, ohio. it's near west virginia. i know many people from the wheeling area, including moundsville, who also have stories about charles manson.

and in our town there is some dispute. many people say that charlie actually lived in cadiz with his wife, but that doesn't fit the "official" time line. there was a house that was torn down in the 80's to build a library. it had a large american flag painted on it and several political messages. some people say that was charlie manson's house. other people say they lived in a house out by the fairgrounds. some people say charlie was never there, only his wife, but we know for sure that she lived with her second husband and raised her children down in east cadiz, which is near hopedale, ohio.

charlie manson also worked in the gambling scene in steubenville, ohio, which has been in the news lately, if you haven't noticed.

as far as the mothman stuff goes, there has always been weird military activity out there. we've seen all kinds of aircraft. the mothman and ufo sightings went on from 1966-1967. manson was let out of prison in the spring of 1967. from what i understand there were also mothman sightings in california at the time.

aileen wuornos's girlfriend is also from cadiz. they didn't accurately portray her in the hollywood movie, but the documentary talks about her. i played in her house with her sister as a child and i was even related to her by marriage for a while.

in other words, we all seem to be connected down there. it's a seedy, corrupt area of the world.

I grew up on the same street as Manson and Moore, and I went into Van's Never Closed Market many times. Van was a real person. He had one arm. He claimed Manson and Moore would come in holding hands. Manson and Moor's homes are still there. My cousin worked at the gas station next to Van's, where Charlie also worked for a time. The rumor is that Manson and Moore's mothers were honeypot agents for the CIA. The Moore's were helping Jews escape Nazi Germany. Their property was sold and my elementary school, Grandview, was built there. It was personally approved by Robert Kennedy, who directed the funds to it. It was a great school, and still is.