From our curious German friends- 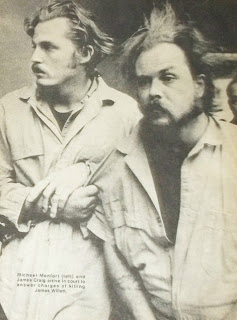 Why do you think AB member Craig was murdered?

The man who killed him was not related to the Family. After the murder, the killer flew to Southern Cal and turned himself in. He was convicted in Ventura, Patty seems to remember. He lives in Sacramento and is a Megan's Law offender; Farf tipped Patty off a while back.

This won’t say why Craig was murdered, but will point to a probable source for that answer. I’ll briefly explain:

15 November 1978, Craig and Barabas are discovered in a burning car in Sacramento. Craig survives and is mumbling stuff. What all does Craig say? Who knows, including the killer, and the killer had access to the same newspaper articles and likely what was being broadcast on TV. If you want some extra special attention, leaving two people tied, shot in the face, and in the trunk of a burning car, would be an opus magnum presentation. But who can understand the criminal mind?

Days later on 18 November 1978, Robert Harry Chrisman turns himself in at the Sacramento Metropolitan Airport and says: he along with Chester Lee Hunt (you always get three names as a murder suspect), Chester’s wife Della, and Donna Bierer, an acquaintance of Chrisman; did the deed.

So what can be surmised thus far? It looks like the fact that Craig survived, smoked out an accomplice who ratted out the other three.

Second: NONE of these people had anything to do with the Family and this was known since the 18th of November, a mere 36 hours after the murder of Craig and Barabas. Yet the rumored connections to Manson persist in spite of publically available information to the contrary. Craig and Barabas were living with Priscilla Cooper, who is loosely associated with some family members as she was living in the Flora Ave house in Stockton, with Brenda and Squeaky. By January 1980, Priscilla Cooper would receive a seven year sentence for five (5) armed robberies, she committed because she was depressed over the murder of Craig. Got it? There’s nothing confusing or convoluted here, just clean, sober, linear logic.

Now it’s going to get weird. On the same day Craig Died, just across the river in Yolo County on Interstate 80, two CHP officers were killed. Roy Blecher and William Freeman were shot by Luis Valenzuela Rodriguez, who was accompanied by his girlfriend Margaret Klaess. At the time they were living in the Bel Air Motel in West Sacramento, CA (still in operation). While stealing two cars, robbing three people and consuming cocaine and drinking, they managed to murder two police officers. Margaret Klaess was given no more than a three year sentence and immunity from all crimes, if she testified fully and truthfully in the Rodriguez murder trial. She must have been somewhat credible since the jury found him guilty and dropped the death penalty in his lap. By now you should have a pounding headache, but I’ll keep typing because I’m sick like that.

During the trial, Margaret Klaess testified that around October 1978, she along with Rodriguez, were teamed with Barabas and Craig. Their collective mission was to rip off a “North Area” cocaine dealer. Are the two crimes related? I don’t know, but if the testimony of Klaess was good enough for a murder conviction, then I would give some weight to what she said about Barabas and Craig. But no definitive conclusion.

Of the four people listed (for the murder of Barabas and Craig), only one is presently serving time in prison. That one person is Chester Lee Hunt (C12447), admitted into the prison system on 22 January 1980, and is housed in the Richard J Donovan Correctional Facility in southern California, according to the California Inmate Locator.

More than likely, Chester Lee Hunt (64) was the one with the greatest culpability in the murder of Craig since he’s still in the clink. Even though establishing motive is NOT a requirement for conviction in California, there’s an above average chance that some sort of motive is mentioned in the trial or some judicial transcripts. I’m not even sure if they went to trial or simply plead guilty. Should someone know a lawyer that could look up this case law, or have some access to a legal library from Sacramento County, the transcripts may contain the official answer.

There now, wasn’t that easy? I need a drink.

This blog has been awesome lately. Love the Windy interviews. Each one leaves me with more questions and the hope that there will be another installment. Deb?

And, Farf, I check this blog several times daily just to see if you've commented. Knowledgeable, interesting and funny. Keep it coming!

Yes, Cindy Lee, there will be more installments on Windy!

I like Farf, too, and consider him a treasure and a real asset to us here.

Ps: Farflung, Deb. Deb, Farflung. Now you have met. Farf, please email deb@eviliz. She has a crush on you just like Patty does.

Manson said he was a snitch in the Geraldo interview.

Cindy Lee, Deb S and Panamint, Thanks for the kind messages. Now I’ll probably get ‘full on’ Randy Marsh, but with a bigger head, around the house till I humble myself…. again… and very soon.

Of course I wasn’t satisfied with the level of weirdness with a cop killing couple, who join forces with Barabas and Craig, to rip off some drug dealer. Nope; I needed something Manson-y to tie to this crime so my theory of all things criminal being related would still stand true. Well set your faces to stunned, while reading this:

So it is written, so it is done. Just days after his arrest, Rodriguez formed a defense team that contacted who to represent Rodriguez? You are 100% correct because you said without hesitation, Vince Bugliosi, and kept the rudderless ship of ‘Unbearable Irony’ on her inevitable collision course with ‘Reason’ and ‘Logic’.

How did Monfort die? Does anyone know? It wasn't from his 800+ year sentence.

Farf, that is amazing. Who needs six degrees of separation when 2 or 3 will do?

Now to muddy the waters.... Rodriguez after being handed down the death sentence by Judge Karesh, who was appointed by Chief Justice Rose Bird to try the case, went off to prison. Thirteen years after the murders one of Rodriguez's nearly forty writs and what not got him back before the same judge who by then had doubts about his guilt, saying that the main witness against Rodriguez, Margaret Klaess was not credible.

Karesh resentenced Rodriguez to life in prison. He is housed in Salinas Valley Prison according to the California inmate locator.

Leilani, email me I'd like to speak with you.

Della Hunt is my aunt

Hello everyone. I found this thread while searching for info on my cousin, Jesse James Craig. I was wondering if anyone here knew him or could give me more information. Thank you.

Chester lee and Della is my uncle and aunt. Get your facts.

Hey guys Im looking for the original news article if anybody can help me please. My grandma was one of the ladies that was included on this. I know the exact story and would love to share why they were murdered and burned in the trunk. My grandma has told me multiple times and its not nice. Would love to share my story someone reply who cares.

I will try to find the articles for you.

Can you also send them to me please

You folks will need to email me if you want the articles, I have to have an email address to send them to.

I have saved a copy of the murders of Craig and my uncle eddy barabas but not of anything written here. Everything I’ve been looking for in regards to the night my uncle was killed seems to be here but I cannot yet put it together. It all falls short of direct and or transparent. Far from truthful. I’m sure someone is doing time for something they knew about versus anything that they allegedly did. If you would be so kind as to contact me with what you do know to be true I would be more than grateful. I would love to put this to rest. Please, whoever you are, for my tormented mind and my broken family….
The barabas kid

DebS how do I email you?
Jjsmamamonser@gmail.com
The barabas kid