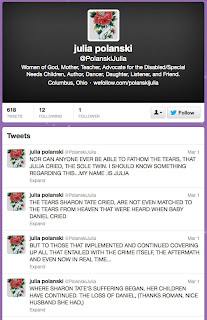 A glimpse into the mind of Rosie Blanchard-Tate-Polanski. A seriously disturbed woman - my head hurts just from going back and reading her tweets from the beginning. It also says something about the state of mind of Billy Garrettson - who falls in love with someone who is this disturbed?!?

Her train of thought is erratic and really hard to track from one tweet to another, but from what I can gather, she's now saying that Sharon had twins - one boy, one girl, the boy is "Daniel". Steve McQueen is the father. Roman had them taken away. A nun, by the name of Sister Rose Vernette seemingly the evil woman who hid her away. She writes about about relatives named Blanchard. She has a daughter named Sharon (with learning disabilities?)

Claims McQueen is still alive living under the alias of Levon.

Claims Colonel Tate is still alive. Calls him (I think) Jim Hern. I guess she also claims that Garrettson, "Hern", Flebbe, and McQueen - aka Levon, kidnapped her daughter back in 2000?

I admit I didn't know who this was at first.

"IN OUR GAMES IN THE USA -- A BALL MADE OF PIG SKIN IS UTILISED... NOT THE HEAD OF THE BABY, THE ONE TWIN DANIEL. KICKED INTO THE WISHING WELL"

"Roman must play God, I guess he must play something, Lord knows he can't direct!"

"Patty Duke, nice lady, good women. Noreen (her cousin) not so much, village idiot. Levon, he is the idiot, (village not included)"

"Tomato soup on this fine day for lunch..soup great for the soul great for lunch..Hope everyone has a blessed afternoon like us..xxxxx-ooooo"

"Why was Leslie Lisnitzer here in 2011? Why was Roman (what fake name used?) The trailer in the woods? What happened during the night of July" ... "They didn't come here to sell me Tupperware, I know that"

"I am actually not short, however my temper is. No actually I am 'Vertically Challenged' And no I wasn't one of the munchkins, but I could've"

Interesting lady. I like the last one. Matt mentioned one Manson/Wizard of Oz connection in another thread, here we have another. Was Sharon Tate's kidnapped baby an extra in the Wizard of Oz?? Please Eviliz.com, do some digging.

on Facebook there is someone named
"SHA BLUE" she has told me that Charlie is her father, there were twins , etc-she rememeber Red as being so nice ( good memory for a baby) I wonder if this is the same person-yikes! I finally deleted her just got to be too much

Candy, she also says Mary is her mom.

That's all I have to say about that...

This person sounds like the one who told me he had a twin. I became suspicious when he said there was over a year's difference in their ages.

Nuttier than a jar of Planters. Wow!

The single most disturbing thing about this woman is the fact she has a Twitter account…. and uses it.

Don’t lose sight on the fact that this technology virtually eliminates the use of articles and adverbs by limiting the missive to 140 characters. Adding the ironic, anachronistic, and inexplicable use of telephones to hunt and peck these gems, makes users appear as moronic as their messages.

She's obviously functionally insane and no harm to anyone. I really hate to laugh, it goes against my grain but damn, she's funny.

this insanity has had to have harmed her daughter.

she also approached the tates claiming to be sharon reincarnated.

Somebody's cheese has slipped off her cracker.

I'm not sure of the medical term but I think it's "bat shit nuts". No matter how you slice it's obvious that her biscuits are a little doughy in the middle.

Damn. And people think Patty is cray-cray. Rosie has her beat by a country mile!

I have had conversations with her as well.