BOOK REPORT Popular Crime Reflections on the Celebration of Violence

Eviliz is a lover of all true crime stories and frequents the library in search of the newest releases.  My newest read comes with a complimentary type up of the Charlie parts to share with the blog.-


Popular Crime Reflections on the Celebration of Violence
by Bill James published in 2011. 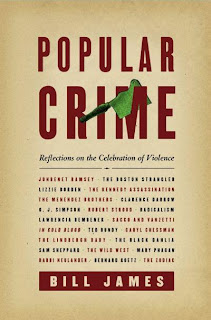 It’s your basic run of the mill A-Z true crime book.  Lizzie Borden and O.J. plus everyone in between.  The title of the book contains the words ~“Popular Crime Reflections” yet Manson and the Family are mentioned three times without even a description of the crimes and only mentions one victim, Sharon Tate. Were the crimes considered not “popular” or worth “reflecting on?”

Here are 2 of the 18 elements I found amusing plus the one which mentions Charlie.

“The tabloid elements- which involve soap opera like stories and are media driven.

Killer on the loose story elements- receive attention due to the public’s perception that they may be in actual danger.  The Beltway sniper was a Killer on the Loose story, as were John Dillinger, Bonnie and Clyde, and Charles Starkweather.

Bizarre elements- cause stories to stand out from the mass of criminal events by gruesome, grotesque and extremely unusual features.  Jeffrey Dahmer is a Bizarre story, as is Charles Manson and Winnie Judd, the Trunk Murderess (1931).  Any story involving unusual amounts of cruelty could be called a Bizarre story.

Page 265~ “I have no empirical evidence to support what I’m saying, but go to the library, and look up magazines from 1965 to 1968.  You’ll find volumes of essays about the “generation gap,” the split of society into young and old.  Very, very few of those articles will make any mention of the assassination of JFK.   It’s an easy, after-the-fact dividing line between the generations, but it’s just not true.  On the other hand, the cultural impact of the Manson murders is enormously under appreciated.  The murder of Sharon Tate rocked the nation when the counter culture was just past its peak.  The arrest and trial of Charles Manson and his followers delivered to young Americans a simple message of enormous impact: that evil men, adorned with flowers, would look much the same as saints.  A culture based on categorical trust and unconditional acceptance was a balloon waiting to burst, and Charles Manson was the needle.

We didn’t ask ourselves what evil lurked beneath the skin of strangers, so long as they dressed like us.  Evil belonged to the other generations, to the hard cases among our generation who would not open their hearts.  Was this naive?  It was preposterously naive.  We were younger than young.  The sixties weren’t cynical, and they certainly didn’t come about after the loss of the nation’s innocence.  They were innocence personified, innocence run amok.  They could not co-exist with personified evil."

Page 286-  In the three cases ca. (Manson, Hearst and Power), career criminals, a few years older than the baby boomers, adopted the guise of revolutionaries in order to seduce young women – seduce them sexually, but also to seduce them into becoming accomplices, to seduce them into a life sustained by violent crime.

Charles Manson worked with society's least favored, with young girls who had run away from dysfunctional families, or who had been driven away by physical and sexual abuse.  He adopted not the central ideas of the revolution, but the marginalia- the clothes, the hair, the music- and used these to build a “family,” a cult of people who had abandoned normal life in order to do whatever Charlie wanted.  This cult he then used as a weapon against bourgeois society that he felt had humiliated him, intending nothing except to cause pain, to cause harm.

this is a book by a bombastic barroom blowhard best known for his baseball work. He had to be told to shut up this past winter by his employee the Red Sox because of his vociferous insistence of Joe Paterno's complete innocence.
I read about half the book but just couldn't take anymore.

Most of it sounds accurate to me...

The arrest and trial of Charles Manson and his followers delivered to young Americans a simple message of enormous impact: that evil men, adorned with flowers, would look much the same as SAINTS.


This is the guy whose ideas they based the movie Money Ball with Brad Pitt on. He was Billy Beans inspiration.He is mentioned a couple of times in the movie.

Liz- It is great to see any post with your name at the bottom of it. good to hear from you and I hope all is well :)

George William "Bill" James (born October 5, 1949) is an American baseball writer, historian, and statistician whose work has been widely influential. Since 1977, James has written more than two dozen books devoted to baseball history and statistics. His approach, which he termed sabermetrics in reference to the Society for American Baseball Research (SABR),[1] scientifically analyzes and studies baseball, often through the use of statistical data, in an attempt to determine why teams win and lose. His Baseball Abstract books in the 1980s are the modern predecessor to websites using sabermetrics such as Baseball Prospectus and Baseball Primer (now Baseball Think Factory).[2]

yup, the guy deserves all the credit in the world for his baseball work. which is why I was taken aback by his writing in this book which had little in terms of facts and figures but was mostly just his "gut" interpretations and assessments.

hey Matt, is it kosher to ask you this, maybe I should do so in an email, but...
in a recent post the Col mentioned his talking with Nancy Pitman. Can I just ask if either you or Liz talk directly with any core Family members? Obviously I don't expect you to say who if you do, just wondering if you have open lines.

The recipe for inclusion as a famous or infamous crime may contain the following:

I’ve tried to identify the Rosetta stone for infamy, and constantly find myself using it like the planchette on a Ouija board. Somehow my bias and personal experiences end up influencing my conclusion.

It’s only been recently that generations have received names which included the mysterious ‘gap’. It appears to be far more technology driven than social. It’s much harder to be a serial killer when you have to rely on horses or foot travel. Starkweather, Manson and Bundy were able to cover vast distances quickly enough to outpace technology. Inyo County didn’t know what LA County was doing for example. Cars also allowed criminals the advantage of having effective aliases since there were few computers or databases to crosscheck who is really in your jail. So this fuels a large fear most of us possess… the unknown.

The ‘unknown vacuum’ is the party attended by disjointed causal theories, which go into overdrive. It was the hippies, Viet Nam, pollution, Nixon, youth, rock music, drugs, hypnosis, brainwashing, free sex, long hair, Hitler, and anything else that can be thrown against the wall. Manson warped my sensitivities by turning what I had mentally categorized as a bunch of ‘Glindas’ (hippies), into another group to be viewed with dread and suspicion. My father used them as a straw man to increase my frequency of visits of the barber; HIS barber (hard to imagine now). My mother dutifully excluded any thoughts of me attending college in LA, and used Manson to buttress her argument for a local institution of higher education (thinly veiled; yes). It isn’t that difficult to identify which handle on the machine people are grasping to advance some agenda, just which machine will appeal to that larger audience.

Look at the combination of things required to simulate the 60’s in a laboratory. You need a conflicted base of adults, who emerged from The Great Depression, to enter WWII, in order to stamp out totalitarianism. A noble group indeed, but these very people who vehemently opposed totalitarianism, insisted upon everything being the same. Same fashions, hair styles, homes (Levittown), cars and fast foods. Everything must conform and be the same, while somehow occupying a perch in diametric opposition to communism (where EVERYTHING is the same), or as LBJ called it ‘comma-nism’. This makes my brain hurt, and the only prescriptions are ‘Mother’s little helpers’ and martinis.

Add a little sex and then things can get interesting. The sexual revolution needed just as many stars to align in order for it to blossom. Removing or being able to treat the disease that had Al Capone fishing out of his bathtub was a good start. The free part, which removed long term financial responsibility, came in the form of another pill, a little helper which prevented mothers. Wooo-hooo! Yet I feel something is still missing.

Drugs baby, give me drugs. This is pretty easy since drugs all appear to have the same major ingredient: rationalization. It expands your mind, less dangerous than booze, or grown naturally by nature. Hey man, way to avoid towing some phony line like your parents. For all the reasons given for drug consumption, imbibing, or smoking; doing it because it delivers some form of pleasure is rarely on the list. Hmmm…. oh well. So add some natural and healthy drugs to the 60’s mix. Now it’s starting to taste right, but it needs something to compliment the non-conformist, free love fueled by drugs.

War, huh…what is it good for? Curing comma-nism for one thing. There was a viewpoint that somehow the strength of America could be brought down, if we ‘caught’ a case of comma-nism, which had spread to Korea, Cuba and then Viet Nam. So after defeating the Axis powers with a scorched Earth campaign, designed to deliver unconditional surrender, Viet Nam was occupied free of any such goal. The cause of spreading democracy was righteous, the veterans were well intended, but the execution was flawed and brought into our living rooms at dinner time. Now peace, love and happiness had a counterweight to balance the 60’s machine.

Did it require all this prequel, in order to establish the Family, in the nation’s psyche for bad behavior? Even with all the added complexity, I can safely say: I don’t know.