The World's Most Interesting Man 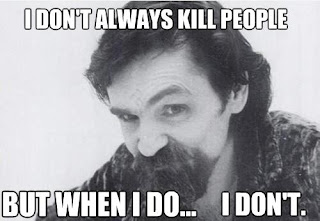 Charlie was born a couple of centuries to late - he would have been the perfect court jester (and secret assassin) for Henry VIII or Richard III.
Is that the same velour shirt Watkins used to wear?
Does anyone know of a timeline/spreadsheet type of thing documenting when Family members renounced Manson? I was surprised to read here the Leslie was still loyal as late as '78. I know that Gypsy said it took her a good decade to erase the 'Spahn mindset'.
And do we know with any certainty who if any of the Family members still actively support and proclaim love for Manson? Cappy, Sandy and Lynn seem like the best bets. Nancy, maybe? Certainly not Mary or Ruth Ann I would think. Anyone know for sure where the originals stand?

Is that the same velour shirt Watkins used to wear?

Thx for the laugh

The statement of a an extreme Narcissist.

Charlie Manson was the little dude at the bus station that you made small talk with because you didn't want no trouble. Only he came of age the same time California chicks were trying acid. Some things are fate.