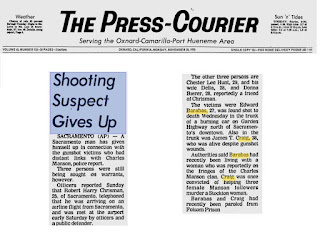 Above is another copy of the article describing how Robert Chrisman turned himself in in 1978 regarding the murder of James Craig. Farf further filled us in as follows:

"On the same day Craig died, just across the river in Yolo County on Interstate 80, two CHP officers were killed. Roy Blecher and William Freeman were shot by Luis Valenzuela Rodriguez, who was accompanied by his girlfriend Margaret Klaess. At the time they were living in the Bel Air Motel in West Sacramento, CA (still in operation). While stealing two cars, robbing three people and consuming cocaine and drinking, they managed to murder two police officers. Margaret Klaess was given no more than a three year sentence and immunity from all crimes, if she testified fully and truthfully in the Rodriguez murder trial. She must have been somewhat credible since the jury found him guilty and dropped the death penalty in his lap. During the trial, Margaret Klaess testified that around October 1978, she along with Rodriguez, were teamed with Barabas and Craig. Their collective mission was to rip off a “North Area” cocaine dealer. Are the two crimes related? I don’t know, but if the testimony of Klaess was good enough for a murder conviction, then I would give some weight to what she said about Barabas and Craig. But no definitive conclusion."

Thanks again Farf, for your excellent knowledge of the minutiae. Here's a little gift for you from Patty. 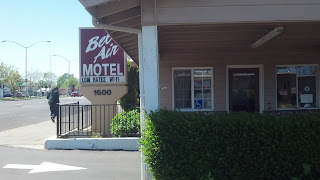 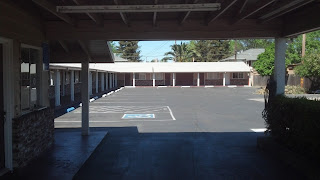 PS: The owner is a kind, petite, eagle-eyed Indian woman who wanted to know what Patty was looking for? This is the first time anyone has ever asked her what she was doing while photographing a Manson related site. Patty told her that "someone famous" used to stay here in the 1970's. Her smile was so big that Patty did not have the heart to tell her who...

There are strange lifestyles in this world.

Did these criminals have to do something with the famous Californian gangs of this time like the Wonderland Gang or the gang around Eddie Nash aka Adel Nasrallah? Look at the movie "Wonderland" of 2003!

Patty - Great heart is in short demand nowadays- I am sure that you have one :)

Wonderland was a great movie!! Val Kilmer is a tremendous actor

He seemed to stop acting at some point and actually become Jim Morrison...

Thanks Patty, your desire and ability to find and document the obscure is always appreciated. It adds another layer of texture to a story which is already disturbing and futile.

Seeing what appears to be an enterprise with around a dozen rooms, and not a single vehicle in the parking lot, manages to maintain that aura of this being the end of the line for someone. No need for some superfluous lobby when a window filled with notices and disclaimers, along with a semicircular opening to pass your $28.99 through is available. Plus you can take comfort in knowing your bed cover is flame resistant since the dozens of cigarette burns indicate multiple failures to ignite the fabric. I’m all about safety.

Typically around 11 PM you can count on someone pulling up in front of your room with their high beams backlighting your translucent curtains, while they appear to be reading ‘War and Peace’ before finally shutting off their engine and extinguishing the lights. Next will be a cacophony of multiple car doors slamming, along with a trunk lid, and oddly the vehicle’s hood, before the distinct footfall of someone walking nearby. You know what’s next. That’s right, the tell tale sound of a key being inserted into your doorknob and repeatedly jiggled and twisted until you open the door to view a face which is the definition of surprise and bewilderment. But don’t you worry, they are going to their room right next door, where they will morph into intelligent and quiet guests.

THIS POST has some excellent insight into James Craig as well.

West Sacramento is full of dumpy little motels like this one. They are trying to clean up the area with modest success. A recent billboard advertised the 30 some odd inns as chocolates in a fancy box. "Pick one!" It read. It stayed up until all the red and yellow faded out of it. Appropriate.

thanks again, Farf, you inspire Patty.

The Bel Air Motel at 1600 W. Capitol is 3.8 miles (8 minutes) away from where James Craig was found nearly dead in the back of a burning car. Hood, CA where said car was stolen is about 10 minutes south. All three places are conveniently located off of Interstate 5 in Sacramento. Coincidentally, Bend, OR is a seven-hour straight-shot to the north.

I'm very familiar with W Capitol Ave.
Hookers, pimps, druggies and gang bangers. It is a complete shit hole. The only motel worse than this one was the Experience but someone burned it down.

I was in West Sacramento last night. I took my daughter to the Sacramento River Cats game. It got rained out after 2 at bats. I was going to take pictures on West Capitol Ave but I didn't want to subject my daughter to the hookers and pimps. Next time I'm there I'll take some good pictures to add to this blog.....