Article by Catherine Shoard for guardiannews.com

Franco is to star and direct Beautiful People, a biopic about Hollywood celebrity hair stylist Jay Sebring who was murdered by a member of the Charles Manson cult. 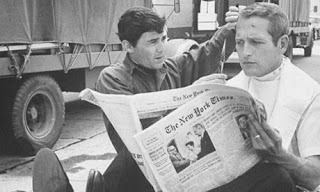 Hairy tales in Hollywood today as it emerges that James Franco is set to direct and star in a film about a visionary hair stylist, while a real-life tress-dresser on the new Superman movie is suing Warner Bros.

Franco's film is Beautiful People, a biopic of Jay Sebring, who tousled the barnets and more besides of multiple celebrities in the 1960s before being murdered – along with sometime girlfriend Sharon Tate – by the cult led by Charles Manson.

Franco is currently in Park City for the Sundance film festival, where he's promoting three projects: Interior. Leather Bar, which he co-directed, Kink, a fetish documentary which he produced, and the biopic Lovelace, in which he costars.

Meanwhile, Cheryl Pickenback is suing producers on Man of Steel for injuries allegedly received on set. Pickenback, a professional movie coiffeur, says she was instructed to walk across an Illinois set that was made to appear like rubble to attend to an actor's hair between takes. "Severe and permanent" injuries apparently resulted from a fall she sustained on the "fractured and uneven walking surface".


Thanks, Max Frost
(Max will soon be a regular contributor on Eviliz)

Forgive me for gobbling up so much page space with what I'm about to write. It will require 2 entries as I'm only allowed so much text per entry.

Now that the dust has settled (or has it?) from the kindergarten lunchroom brawl I bravely endured with two members who shall remain nameless (we all know who they are), I feel compelled to give a shout out to a valued long time, highly respected member who recently went MIA due to some, unfortunately, misguided things I said here on the blog at the time that this brawl thing started.

I was reviewing the original posts from 2 weeks ago, and noticed that this person actually lived up to his notice to vacate the blog (unlike the two nameless guys who kept threatening to leave but then kept posting).

What follows below, more than likely, will be incredibly boring to most of you and I passionately encourage everyone to skip to the next comment - with the exception of the intended recipient.

I’m asking you to reconsider your hasty decision to leave the blog as a result of comments I made on a recent thread that you deemed “anti government.”

My comments were made in response to posts by another member and were limited to (I thought) my discussion/debate with that member. I wasn’t directing my comments to the other members. I wasn’t trying to ruin anyone’s day. I know… it was Memorial Day weekend and the timing was awful.

It was clumsy and careless of me and I sincerely apologize for offending you.

I would like to clarify, however, my position on this subject. I don’t want you to read this and walk away with your initial impression of me intact. I’m hoping you will be able to relate to where I’m coming from rather than oppose it. Believe it or not, we have a lot in common.

I read a post recently saying you were a life-long military guy. I then understood why you would be bothered enough to actually leave.

I have two uncles and a stepfather who fought in Vietnam. I have cousins in the military. I have friends who have been, or currently are, in the military. One of them is an active marine who’s very patriotic and a bad motherf***er! (He’s expressed to me many times the disgust he has with our government). My grandfather was in the polish army - Held POW by the germans. My grandmother survived Auschwitz! I think I have as much of a right to speak up as you do. I think it’s as important that you hear me as it is I hear you. We are on the same island here.

You mentioned that you are “too patriotic” for this blog. Let’s not forget that being a patriot does not mean that we look the other way when the government is guilty of doing something that we do not approve of – something in total violation of the constitution and/or bill of rights. Being a patriot means that you do whatever you can to protect and preserve the constitution and the bill of rights. Does it not?

You fought for those causes and rights. You swore to always abide by and preserve them. I don’t know if you have been noticing, but we have been collectively losing A LOT of our rights – especially in the last 12 years. That bothers me and I would hope it bothers you more.

Haven’t you noticed this plague-like pattern of the neglect of VETS by our government?

I have seen many, many primetime network specials on vets that have made their sacrifices in war only to be kicked to the curb when they return. I don’t know how aware of this you are or aren’t at this point, so I won’t go on and on about it. I just want you to know that I have great respect for vets, and my complaints about government have nothing to do with the honorable men & women in the military.

In contrast, I am appalled by what has happened to so many vets. I live in Los Angeles and it seems like the majority of elderly homeless men are VETS! How is this possible? How does this happen? Who allows it to happen?

I also encourage you to learn the story of Brandon Raub. He was a marine and I think you will be shocked to learn what our government did to him when he dared to exercise his 1st amendment right that he fought for.

In closing, I am as much a patriot as you are.

I will quote something I read recently – it sums up what I am trying to say to you:

I hope you return to the blog. People miss you. And I promise you, I’m not here to rant about my feelings. That was an isolated incident. I’ll probably make a comment here and there that you may not like – but I hope you’ll understand where I’m coming from when/if I do.

I salute you for all your service, SIR!

Very well said, Max. Thank you! I look forward to your future contributions to this blog.

Mr Hendrickson has asked me to share this with Grump and Max. I think we should all read this one.

can patty say again how much she loathes franco? maybe because she's never met him.

doc, will u email Patty please? shes gotta proposition for u.

Always heard that The character in Shampoo was based on Jay Sebring
Either way a dam good movie
Hello Max hoping you bring so new information to the blog don't mind the B.S some people seem to have had issues with a lot of different people maybe it's time they realize there the problem !

I agree William. Time for the whiners to move on to the place where no one's feelings are ever hurt and they can always be right. Let's have some fresh blood.

I have always really liked Grump. I see Max's point of view, especially in light of recent events in the news. I too hate how quickly people are giving up freedom for security. That seems contrary to everything America stands for.
Grump is a great guy, and needs to come back. I would be disappointed if people's feelings ruin what I see as a good thing. I have many friends that I disagree with politically and they say things that make me crazy, especially when I feel like they don't respect my right to be different. THAT SUCKS. We all should respect other people's opinions, simply because we live in a free country and we should all want the freedom to believe (and say) what we want. Sorry for the rant, I only want everyone to get along. Hopefully i didn't offend anyone. I mean only respect.

I just emailed you Patty.

Max Frost sayd in previous ,, Unfortunately Sharon was at the wrong place at the wrong time, which happened to be her home. She wasn't part of the mess. She wasn't even there, it appeared - her car was in the shop ,, Please Max,what do ya mean with this ?? Explain in a nutshell please.... HB

He's a pretty interesting guy. I mean c'mon, anyone who wants to make a movie about Sebring has gotta be pretty cool.

Her car was not at the house, it was in the shop.
She had returned early from Europe.
She wasn't supposed to be there.
It looked like she wasn't there.

"Dissent is the highest form of patriotism." - Thomas Jefferson

"Dissent is the highest form of patriotism." - Thomas Jefferson

"Those who would give up Essential Liberty to purchase a little Temporary Safety, deserve neither Liberty nor Safety" - Benjamin Franklin

wel...maybe. as long as he keeps away from terry richardson from now on...GROSS

Yea it totally sums things up

That Ben Franklin quote is AWESOME, thanks!

Actually I have James Franco to thank for acquiring an old mustang for some film project of his. The mustang was being stored in a friends garage for years. James got it out just in time for me to store half of my stuff in the garage. I had moved from a much bigger place into a much smaller place and didn't have enough space for all my stuff. Thanks James!

you know him personally! lol too funny/cool.

Did Patty get my email?

Yes, did Doc get one back? He should have by now.

RE: the Grump. Can Patty just say, she has never met anyone like him and she has never felt more respected and welcome in anyone's home, cept maybe Mom-Patty's? Even though Grump and Patty are different in many ways, she digs him because he is a scholar and a patriot and a helluva good time. Ask him if you can see his tattoos.

Yes, Doc got it. He sent one back to Patty.

Ben is a quotable guy. My favorite is "There are more old drunkards than old doctors."

"Freedom of speech is a principal pillar of a free government; when this support is taken away, the constitution of a free society is dissolved, and tyranny is erected on its ruins. Republics and limited monarchies derive their strength and vigor from a popular examination into the action of the magistrates."

Top o' the mornin' to ya Patty. I was wondering why you don't like James Franco and you also said something about him and that photographer but I can't seem to find the post.
Please splain it to me......

Franco. Getting a PhD but not showing up for class. Picking dumb twitter fights. Being a dick to Ann Hathaway at the Oscars year before last. His latest photo shoot for GQ was done by Terry, who had James put a skeleton in his crotch like its giving him head. Gross. Just, gross. And, he looks greasy. Gonna need a lot of shampoo before filming starts...