Barred From World He Loved, Just Getting By Is a Trial 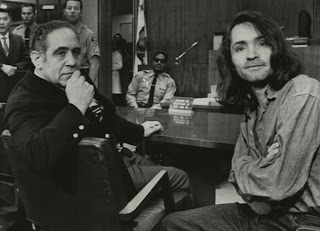 "The man at the table has lived the last year in a Garden Grove motel. Before that, it was four years in a Costa Mesa motel. Now 28 years since the Manson trial, Irving Kanarek is 78 years old...He's had bouts with mental illness and cancer, but says he feels fine. He lives on Social Security and says he can't afford a car.
Amid the carnival-like atmosphere of the Manson trial, Kanarek was much more than a bit player. Although Bugliosi referred to Kanarek in his summation as "the Toscanini of tedium"....
He hasn't practiced since November of 1989 when, in his own words, "I flipped out." Beset by personal problems, Kanarek was admitted to the Harbor-UCLA Medical Center for psychiatric treatment.
He's uncertain how long he stayed there and says he then spent another couple years after his release in a "rest home." But by the time he regained his mental faculties, he says, he had lost his law practice and the State Bar paid out three claims against him from former clients totaling $40,500.
And he remains faithful to his most famous client: "Manson was a personable guy. He had nothing to do with those murders. The people who testified against him are all criminals"."

Thanks Rob C for the tip...

In 1973 a true crime book was published about the kidnapping of two LAPD officers which ended with one of them getting murdered in an onion field. That book written by former LAPD Police Sergeant Joseph Wambaugh was simply titled ‘The Onion Field’.

The next year brought the publication of ‘Helter Skelter’ by Los Angeles DA Vincent Bugliosi, which chronicled the warped, twisted, and baffling maze known as: the cage fight between the justice system and the Manson Family.

Who was the Forrest Gump character to both of these bestsellers? Irv Kanarek.

Wambaugh went on to write other books and screenplays, and managed to break the fourth dimension when he sorta bribed a cop to arrest a suspect, so he could direct the outcome of another ‘true crime’ book.

(cue: Sympathy for the Devil)

Naturally the pendulum would have to swing to the opposite side of Bugliosi’s literary arc as well. A mass of activities are constantly interconnected and tied to the Manson Family. James and Lauren being associated with Ronald Hughes’ potential murder, before presumably the same James and Lauren met their ends in Guerneville and Stockton. All this at the hands of two Manson women, with an X carved into their foreheads. This complex Helter Skelter tale of racial Armageddon is followed by the astonishingly unlikely ‘And the Sea Will Tell’. A tropical island has a total population of four (4) people and half of them are murdered. Now Bugliosi wants to convince the reader, of the two remaining people, one was the murderer, and the other was completely innocent, in spite of taking possession of the murdered couple’s yacht. So with these two suspects, there was absolutely no interconnectivity. It made my brain sore.

Here many years later, Kanarek is living hand to mouth in a Garden Grove motel and can’t afford an automobile while Manson has his room, medical, and meals supplied by the state for life. There’s got to be a ‘Twilight Zone’ lesson buried somewhere in this tangle of irony and contradiction, which concludes with Lucifer laughing uncontrollably, as the players realize they all reside in Hades.

Stalin or Attila the Hun could have been personable guys, too. That doesn't mean they were incapable of cold-blooded murder. Having dinner with either one of them was probably a nerve-wracking experience. (ie. Ask Stalin's wife.)

(I watched "The Manson Family Gang" last night. Barely any interviews. I was disappointed.)

The prisons are full of personable guys.

That's the most relaxed photo I've ever seen of Charlie. Looks like just another guy on the street. (Nothing like the Michal Ben Horin interview I watched other night. Couldn't believe at one point she said to him "Oh, don't start". Then Charlie stood and said, "I'll smack you right here right on the spot!")

Kanarek was hired against Manson's will and had to deal with an unresponsive client who did his level best to be a complete pain in the ass in an effort to get him to quit. It's safe to say they didn't exactly have a cosy relationship, they must have been at each others throats - and yet Kanarek was convinced Manson was innocent.

Was I the only one who paused for thought after reading that?

"It's safe to say they didn't exactly have a cozy relationship, they must have been at each others throats"

After reading "Helter Skelter" I don't think Charlie would have been happy with anybody representing him (or the girls it seems, as well).