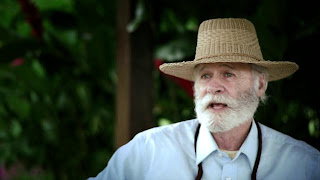 From a recent festival brochure:

"Guillermo Yuscaran (William Lewis) is both a writer and primitivist painter. He  currently resides in Santa Lucia, a small village outside of Tegucigalpa. A former Fulbright scholar, he holds a PhD in Hispanic Studies from the University of California at Santa Barbara. His work has appeared in major publications in the US, Canada, Latin America and Europe. Exhibitions of his paintings have been held in Honduras, Guatemala, El Salvador and Belize, as well as the US. He has authored numerous books, including GRINGOS IN HONDURAS, VELASQUEZ: THE MAN AND HIS ART, POINTS OF LIGHT, and BLUE PARIAH."

And..."My Life with Charles Manson" because as esteemed reader Kimchi has discovered, Guillermo Yuscaran, aka William Lewis, is also Guillermo Soledad! Thanks, Kimchi! This has been driving Patty nuts for years.

While "Guillermo Soledad" means "William Sunshine" in spanish, "Yuscaran" is the name of a historic village which is significant because it was one of the first places in Honduras to get electricity in 1898- even before Tegucigalpa. It is the home of the national drink, "guaro." In 1977, Guillermo submitted an article to Ms. Magazine using the pseudonym "Francisca Yuscaran," which was published. This is when he started using the name in earnest, according to a documentary you can view at http://www.youtube.com/watch?v=LN0FOcRdsPA.

A nice quote from this video: "When you think you have the answers, they actually turn out to be bigger questions. And that's success...that means we are evolving in the right way: when our answers turn back into questions again."

There is also a video about his art at http://www.youtube.com/watch?v=fL_tm9lR8UE. Guillermo's paintings are colorful and interesting, and reasonably priced at waves-of-art.com:

"To enter the world of Guillermo Yuscaran’s paintings, it is essentially to enter a rich dream-world. Indeed, the figure of a man sleeping and dreaming appears in many of the paintings, and as the conscious mind recedes, the landscape of magic and symbol emerges, and reigns in a transparency of wholeness and peace. Guillermo has been called a primitivist, the idealized Honduran village is a central theme, a landscape of great tranquility, but the Yuscaran range is much greater and radiates a quality of emotion and passion.

Guillermo Yuscaran, William Lewis, was raised and nurtured in California. The Pacific coast Buddhism, the radical openness at the end of the long American trail of the westward passage, is a formative influence of the writer-artist. The unique isolation and freedom of Honduras has allowed his art to emerge and flourish. Honduras is as important to him as Tahiti was to Gauguin. He first came to Honduras in 1972. Since then, he has distinguished himself in both art and literature."


Guillermo is one interesting dude.

Thank U, whut, for keeping Patty honest. You're a good friend of the blog. xx

Great job Patty! Guillermo does sound like one interesting guy. His book with Paul Watkins was off the beaten path for him as was the placement of the pre book story in Adam, a men's magazine.

Patty,
Like all your posts and you yourself, this one was wonderful.

What beautiful, vibrant colors in those paintings. I would definitely hang those up in my home.

Does anyone know if the Paul Watkins book is still posted online?

Yes, Al. The Colonel has it at his site.

Great! Thanks so much!

The book was great, the paintings are average hippy-dippy stuff. Good for bartering nugs and body work I bet.

I know this was posted a long time ago, anyway, Soledad means Solitude. Maybe it did meant Sunshine, but definitely that's medieval spanish.