FROM OUR FRIEND J.C. 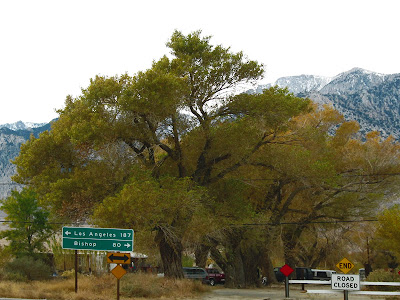 I recently took a tour of Death Valley and surrounding areas and one thing that I wanted to check out on my travels was Bishop, California and trying to get more information on Fillipo Tenerelli. For some reason information on this case is very vague and perhaps it's because it's still considered an open and cold case.


Visiting Bishop, California I quickly realized that there were a lot of motels so finding the one Tenerelli was found dead in was impossible. I did notice a few motels that looked like they could have been around in 1969 like, The Mountainview, The Trees and the Bishop Elms. But there's no guarantee that the motel he was found in is still even around.

One other stop was where Tenerelli's VW was discarded, Father Crowley Vista. Again, there's not much here but a highway and a sheer cliff that made my stomach knot up looking over. But what did strike me as interesting was that Father Crowley Vista was nearly half way between Bishop and Barker Ranch, on the same route - no deviations.

I have read many of the Manson blogs talk about this death and some of them go as far to say that there's no way that it could be a Manson-related murder because of the distance. So untrue. Bishop to Barker Ranch is 150 miles. For those of us who have driven these desert roads, we all know that at some stretches you can easily go 80 - 95mph (though there are certain areas where it is impossible to go over 30 unless you want to go over a rail and plummet to your death much like Tenerelli's VW.) Even at proper speeds, that is 4 hours. Speeding it will be a lot less time.

One of the Mansons could have easily did Tenerelli in, drove 100 miles to Father Crowley Vista and disposed of the VW, and then headed the final 50 miles to Barker Ranch. The route is simple: 395 to 195 and then down Panamint Valley Road which is the Goler Wash access to Barker Ranch. However, there was a record flood in 1969, and Panamint Valley Road generally floods out during any flood. Going through the Mengel Pass route would add a few more hours (due to the slow speeds). 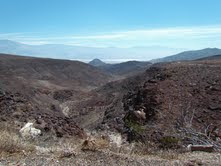 Ed Sanders wrote in his book The Family that Charles Manson did associate with the Gypsy Jokers, mostly in  San Jose. Tenerelli was a Gypsy Joker, so the connection is there. Tenerelli also lived in Culver City, which is about half way between Hollywood and Beverly Hills. It's really hard to take it as a coincidence that Tenerelli was from Los Angeles, and a Gypsy Joker AND was in the vicinity of Death Valley.

I should also point out that Ed Sanders wrote that the Gypsy Jokers were heavily into the occult, and Sanders made the point to mention that Tenerelli's VW was discarded over Father Crowley Vista, which is obviously a similar name to Aleister Crowley. Manson was apprehended October 12, 1969 which was Aleister Crowley's birthday. Odd parallels, but they are always worth mentioning.

I personally think that it would have been easy for someone like Tex Watson to get Tenerelli, stage his death to look like a suicide and then put his car over the mountainside to get rid of it. But even though Tenerelli's death was supposed to look like a suicide, and was ruled one at first, his blood was in that car that went over the ravine and his death has since been tagged as a homicide. So whoever got rid of the car was no career criminal - unless they expected the car to crash and explode like in the movies, thus getting rid of the blood evidence.

Tenerelli was killed October 2, 1969 and Tex Watson fled Barker Ranch October 3, 1969. Watson stayed in Olancha, which is directly south of Bishop on 395 so Watson knew that area. That makes Watson a viable suspect.

I am sure the authorities have taken all of these parallels into consideration and more than likely one of the reasons they were so adamant about obtaining the Watson tapes. Hopefully this case can one day be solved and since Tenerelli was involved with a gang like the Gypsy Jokers, his death more than likely a result of that lifestyle. But, that said lifestyle may have been why may have associated with Watson, the Family or even Manson. 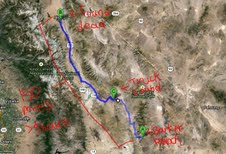 DebS here to add a little something.  Thanks JC for checking all this out and reporting back to us!

After Liz set up this post I wanted to make sure that the victim's name was spelled correctly so I went to Ancestry . com to check that out.  I found that Filippo Tenerelli's name was spelled a couple of different ways, so any misspelling of the name has not been done out of disrespect.

What I did find was very interesting.  Tenerelli was a naturalized US citizen and he had just been naturalized the July before he was killed.  I find it hard to believe that he could become a US citizen and be in the Gypsy Jokers.  They do pretty thorough background checks and I really don't think that a 1%'er would pass the sniff test.  I emailed JC about this, he agreed and said I could add the info to his post.

Though the name is spelled slightly different on the two records the birth date is the same.  The naturalization record gives a Culver City address and the newspaper articles about Tenerelli say that he was from Culver City. 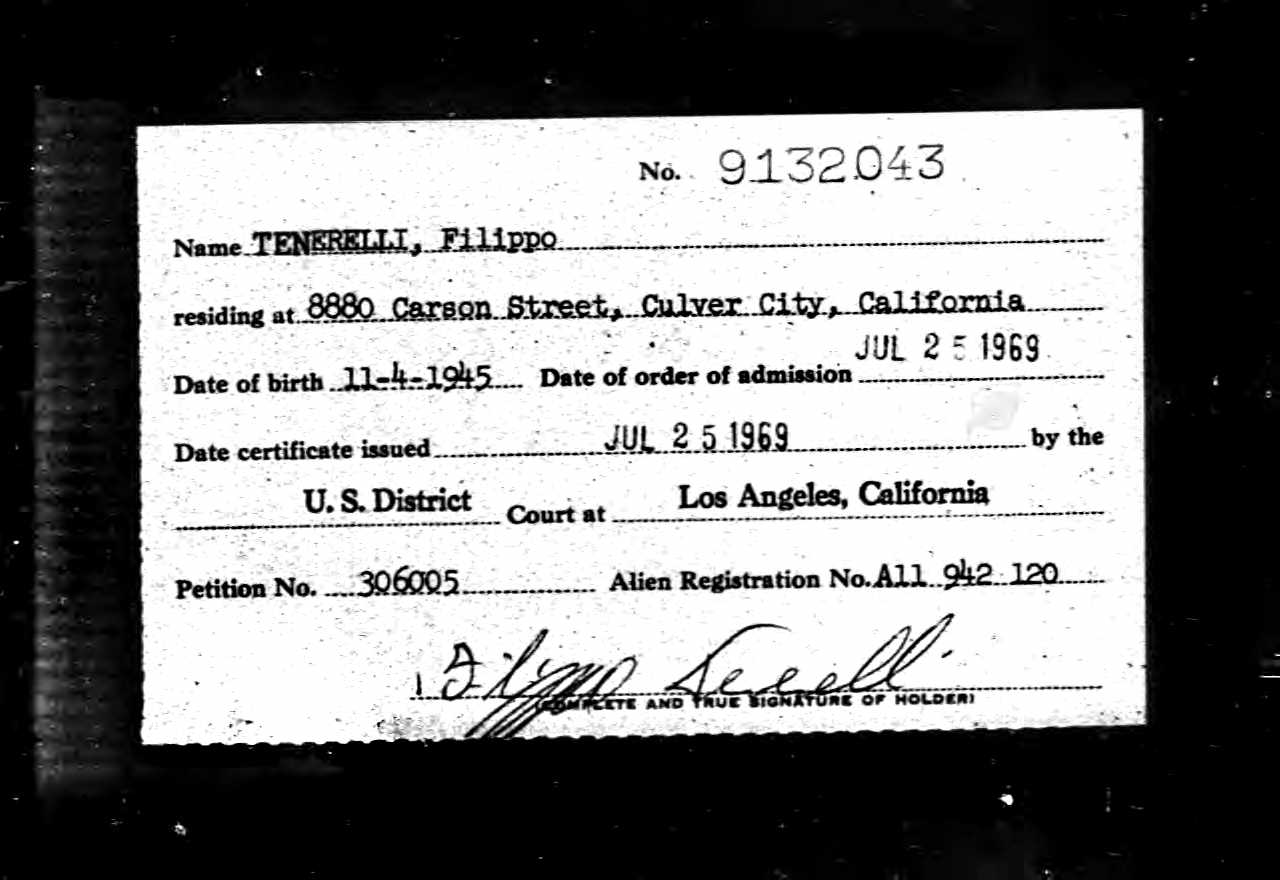 JC you're absolutely right about Crowley Point. The drop-off is impressive. You can see forever, too. It feels like you can see all of DV.

I can remember arriving there and both Grump & I thought we heard a train coming. I moment or two later we realized it was wind acoustics.

Patty has been thoroughly enjoying JC's photos and observations from his Death Valley trip. It is really beautiful there believe it or not, and JC has a way of crystallizing it with his lens.

About Tenerelli: the Pattys often wonder while in Bishop which motel it was. If Deb finds the police report, and you just know she will, Patty will go take photos for y'all. But they will not be as nice as JCs, that is for certain.

Where was Tenerelli born?

I do not know Carol but am attempting to get more info. It might be a couple of weeks before I receive it though.

Tenerelli is an Italian name going by the naturalization records at ancestry.

LVH spoke about 11 murder victims while still being held in Inyo. The authorities only knew of the 9 that the Family was later convicted of. Tenerelli to me is the one I feel has their (Tex's) markings on it (as well as Karl Stubbs.

Yes, orwhut. It's that JC. He's nice enough to contribute from time to time.

Thanks, Matt. Thanks, Old J.C.

I used to be in a 1% motorcycle club. With most 1% clubs you have to be sponsored by someone who's known you for a very long time. If you have never done prison time you will be looked at with suspicion. On top of that you have pass a background check to make sure you're not a snitch or have testified for the prosecution in a court case and that you're not a sex offender, give the names and addresses of all living relatives which are verified by the club or a private investigator, go through a long process as a hang around and then prospect. The San Jose Gypsy Jokers were, in biker lingo, no joke. They became the San Jose Hells Angels. They most likely were a difficult club to get into. For these reasons I doubt that he was a member but could have been an associate.

What really interested me was the fact the VW dump site (crowley) was not long before the turnoff to the road that leads to Ballarat. In those days, October and even before, we all know the gang were ALL OVER Death Valley. Manson was followed through Furnace, Stovepipe, Badwater... though those places are more East. When I visited Ash Meadows and The Devil's Hole (which may or may not be the Devil's Hole Manson spoke about, but I think it is) you can literally get their on back roads with only a short drive on an actual paved road. If Tenerelli was not a Gypsy Jokers, maybe he was saying that he was and maybe that contributed to his death. in the early 1970s the Straight Satans offed a man for claiming to be one of them.

By the way, good job on the article JC.

I haven't seen it posted today but wasn't the Spahn's Ranch raid 44 years ago today?
300,000-500,000 were at Woodstock watching Country Joe McDonald right about the time that Manson and friends were being booked into jail. Every time I see the Woodstock movie I crack when Country Joe is playing Fixin' To Die Rag because there's this blond hair guy sitting near the front of audience mouthing the lyrics but he's got the lyrics wrong. It reminds me of Garth on Wayne's World.

I grew up knowing The Tenerelli's.
That family came to America with mw grand parents in the 60's. Fhilippe Was not a member of any Bike club. He didnt own a bike! My father,Filippe,a couple of their brothers would take me night fishing in San Pidro.I remember when my parents Left me at my Grand parents for a few day's while they drove north to identify the body.

How do we know Tex was in Olancha? What was the source? I've never heard that before and I don't remember reading in either his book or HS. I know there is another article about the murder of Karl Staubbs, but that was in '68.