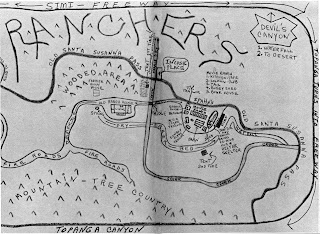 Thirty Years Ago, a Census Taker Had a Brush With Weirdness on the Spahn Ranch

Before mail-in census forms, there were census takers who went door to door, asking questions about marriage, family, children and ethnicity. Thirty years ago, I was one of them. Just before the end of my final training period, in 1970, our instructor gave out assignments.

We were to cover territories nearest our homes, and I drew the Twin Lakes section of Chatsworth. In those days, it was a place of Indian trails, boulders, rotten roads and individuals whose names in the register bore annotations such as "he carries a gun," "don't approach suddenly" and "very fierce dog."

Almost as an afterthought, our instructor told me, "By the way, you also have to cover the Spahn Ranch."

People gasped. The 1969 murders of actress Sharon Tate and six others by Charles Manson and his devotees were still fresh in our minds. The plot had been hatched at the Spahn Movie Ranch, where the near-blind 81-year-old owner, George Spahn, had been conned into allowing "the Family" to live.
Manson and five others were in custody, awaiting trial, but many of his followers were still living at the ranch. I had seen them in town on their "garbage runs"; disheveled and glowering, they would collect discarded fruits and vegetables from behind markets. Although their guru was detained, they believed it was only a matter of time before he would be back with them.

"Of course," the census instructor continued, "you don't have to get the names of all those hippies up there. Just the permanent ones. And you can take a policeman along."

"Fat chance!" I said to myself. As a writer, here was my opportunity to venture into the Manson stronghold and maybe dredge up an angle that hadn't been covered by the hordes of journalists. I had no intention of taking the fuzz along.

In addition, George Spahn was a neighbor of sorts. The now- rundown ranch, where cowboys and Indians had once galloped in B-grade movies, was just a few rock-strewn, chaparral-covered hills behind our place, across the Southern Pacific railroad tracks. Before the Manson people arrived, in the late '60s, we'd seen the old man riding around town in his old truck with "Spahn's Movie Ranch" on the side, driven by his ranch manager and sidekick, Ruby Pearl.

But after the Manson Family moved in, we didn't see much of Spahn. According to rumor, the young women kept him occupied with food and sex to the point that he neither knew nor cared what was going on in his home. Ruby Pearl was still on the scene, but her responsibilities as manager ended at dusk, when she went home. The only other member of the Spahn household was the ranch hand, Donald "Shorty" Shea, but he had disappeared soon after the murders. It was thought that the part-time movie cowboy had gone after an acting job, as he had done in the past.

I had spoken to Spahn only once during the decade since we moved to Chatsworth. Our young sons and their pals loved to roam the hills, where deer, foxes, bobcats and the occasional mountain lion lived. We were glad the boys were enjoying nature, and tried not to worry too much about rattlesnakes and the like. But one thing out there really worried me--the kids had discovered an uncovered well--or was it a mine shaft? They reported that anyone could have stumbled and fallen in. It was so deep, they said, that when they dropped rocks into it, they never heard them hit bottom. From their description, it seemed the shaft was located on the Spahn Ranch, and I called Spahn to complain. He promised to take care of it, but as long as we lived there, I don't believe he did.

It was a hot day in April when I turned off the old Santa Susana Pass Road and drove the couple of miles to the Spahn property. There, under the broiling sun, a sagging "Movie Ranch" sign led into a dusty yard and a cluster of ancient buildings still sporting names such as Longhorn Saloon and Rock City Cafe. Two filthy horse wranglers eyed me as I stepped out briskly, juggling a 3-pound census satchel, my handbag, and a clipboard and pen.

One of them pointed toward a building. I knocked on the door, and after a considerable delay, it was opened by a rather scruffy woman in a ragged skirt and man's shirt. I introduced myself and asked to see Mr. Spahn. She eyed me coldly for a moment and then stepped back, leaving the door ajar. I walked in.

The room was so dark that I couldn't see a thing at first. My other senses more than made up for the deficiency, however. There were smells--indescribable cooking smells, animal smells, dust. And there was a loud buzzing; flies were everywhere.

I eventually made out a round table in one corner that held the remains of a meal; amid the mess, two large cats sat scrounging tidbits. Along one wall was an old sofa on which a large saddle rested. And at the far end of the room, I could detect a stove and sink, both black with age and grime.

As my eyes adjusted to the light, I saw two young women, who appeared to be cooking and eyeing me suspiciously. I could now distinguish the seated figure of George Spahn, sporting his cowboy hat and dark glasses, talking on the phone. The octogenarian, I noted, was still quite a handsome man.
The woman who had answered the door approached me, hands on hips. She was small, skinny and freckled, with red hair. She looked vaguely familiar. Had I seen her in town? (I later realized that this was probably Lynette "Squeaky" Fromme, who had been assigned by Manson to take care of Spahn, to be his eyes, his assistant, his bedfellow, and to report on all his conversations and ensure that no one got close enough to spoil the Family's setup at the ranch.)

The woman stared at me. "Whaddya want?" she asked.

I stated my business and she laughed derisively. The two girls who were cooking joined in. "You want my name?" the redhead said. "I'm Greta Garbo. And that's Marilyn Monroe," she said, pointing.
The door opened, and the two surly cowboys came in. "She's from the census," the skinny woman told them, and then said to me: "This here's Humphrey Bogart."

I was happy to remember my instructions: "You don't have to get the names of all those hippies up there. Just the permanent ones."

By now, Spahn had hung up the phone and I approached him.

"Mr. Spahn," I said, "I'm here to help you fill out your census form. I'll try to make it as brief as possible."

Spahn smiled and nodded, and I proceeded to ask him all the questions about himself and his living quarters. He answered willingly enough. The red-haired woman moved closer to him, fixing me with a cold stare.

While this was going on, more women and men entered the house. It was getting a bit crowded, not to mention fetid. I finished the questions about Spahn and his house and, having decided to narrow the other "permanent residents" down to one, I asked about the ranch hand.

Spahn didn't answer right away. The room was suddenly very still, except for the buzzing flies. I thought maybe he hadn't heard me.

"You have a ranch hand who lives here, don't you, Mr. Spahn? Is his name Shea?"

Something caused me to look up. The eyes of perhaps 10 people were all focused on me.

I had a sudden flash of what I represented to these people. Not the war-protesting, civil-rights-advocating liberal I believed myself to be, but a personification of the Enemy. I was someone of the generation from which they had cut all ties, a member of the Establishment and a person conducting a government survey who might just be a police spy. I thought of the Manson Family's epithet, PIG, written in blood at one of the murder sites, and I regretted my decision not to take a police escort.

After what seemed like a very long pause, Spahn answered, simply, that Shea wasn't there anymore. I hastily got Spahn's signature and, with trembling hands, put my materials in my satchel and turned to go.

WOW! Great find and well written article. These are the stories I love to read. Non-Family member stories and experiences.

If you follow the URL and got to read the orriginal , in LA Times there is a litlle more in the end ...about that well,where kids threw rocks in, and never hit bottom. Maybe that was the Bottomless Pit ?? Ha Ha Ha....LOL Manson searched all over for it, but it was right in the Back-Yard... LOL !!!!

During the 1970 time frame, there was quite a bit of paranoia among the hippie community about the census and its administrative people. The notion was that it was "Big Brother" government trying to pin down all the freedom-loving outlaws. Now, of course, that is standard rhetoric among the right-wing Idaho militias and Tea Party crowd.

Liberals at the time - like the author, no doubt - felt a need to support the census because it would provide a record of the numbers of "undercounted minority groups".

Sue, thank you for occasionally peppering us with era-specific slants that can't be read in books. It helps younger readers like me understand better!

I think those Tea Party people might be the same ones from the sixties.