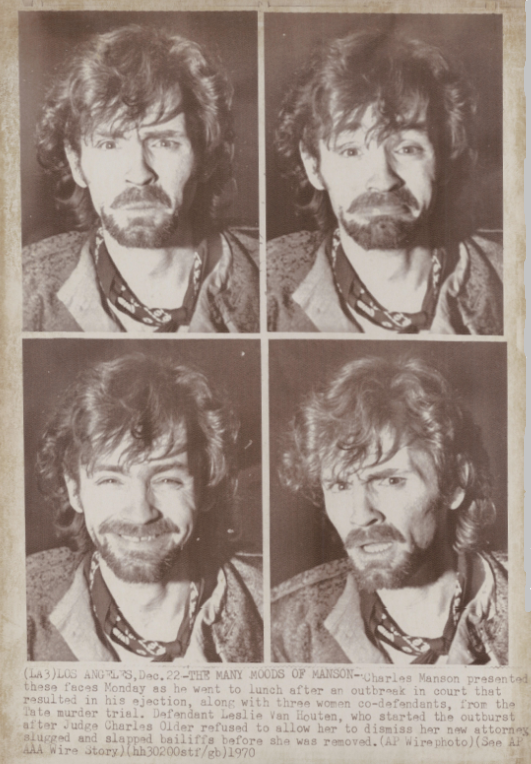 The caption on this photo reads:  LOS ANGELES, Dec. 22 - THE MANY MOODS OF MANSON -   Charles Manson presented these faces Monday as he went to lunch after an outbreak in court that resulted in his ejection, along with three women co-defendants, from the Tate murder trail.  Defendant Leslie Van Houten, who started the outburst after Judge Charles Older refused to allow her to dismiss her new attorney, slugged and slapped bailiffs before she was removed. (AP Wirephoto)

I have to wonder just what sort of effect, Manson and the Family anticipated around the likes of Judge Older and Van Houten’s new attorney, as a result of their antics. Older was a veteran of WWII credited with shooting down more than a dozen aircraft in the Pacific theater, and Maxwell Keith (Van Houten’s new attorney) flew as a Bombardier in the same campaign. Both of them seem to be card carrying members of the ‘Shot at and Missed’ club, and would appear to be poor targets for scare tactics or intimidation.

I can understand an attempt to make the justice system seem duplicitous and chaotic, but that would have been better highlighted when counterpoised to more widely accepted social conduct, while dressed well, with a pleasant smile. Instead, they sang taunting songs, shaved their heads, self mutilated, and anything else which would virtually guarantee the vaporization of any support or reasonable doubt.

The same is true for the hackneyed phrase of “Manson not actually killing anyone”. Older and Keith were veterans of the same war which sentenced the likes of Hideki Tojo and Martin Bormann to death, who didn’t directly kill anyone. I don’t believe (just guessing here) this was such a difficult concept for the jury to sort out.

Much is made about 1969 and what that time period represented with the hippies, free love, and protests against the Viet Nam war. But for every ‘Fortunate Son’ and ‘Paint It Black’, there were still many more ‘Sugar, Sugar’, ‘I Can’t Get Next To You’, ‘A Boy Named Sue’, and ‘This Magic Moment’ melodies which had a greater, but less talked about, representation from the same time frame. After all, who’s going to admit to owning a fanny pack, wearing a disco suit, or dancing to the Macarena today? I thought so.

I have also thought about the Older War hero vs the "evil monster" Manson and have come to understand that the winner is "The Last Man Standing."

About 20 years ago my son bought a great home in a great neighborhood, in "Probate." Inside it looked like it had'nt been painted in many, many years and even had the smell of loneliness. The furniture was all gone, as well as the other ususal pieces of evidence that verify that an actual person did live there. In fact, the hosue was totally empty, EXCEPT for a box of very personal items left in one bedroom. Being a collector of history, I carefully went through the box and discoved a complete writen and pictorial record of the homes' previous occupant.

He was a judge in Los Angeles, California and would have obviousy known Judge Older. Everything was there, pictures of the judge's graduation from law school, his judical awards, etc. His entire life's history in one box AND there was nobody left in his life who even cared enough to cart this man's history off to the local thrift shop for a donation. I rescued the box of human history, but realize now that nobody living today even cares whether this judge even existed.

Farflung. I have a distinct feeling that Charlie probably knew that whatever shtick he chose would hold little to no value for Judge Older and his WWII contemporaries. I'm sure he did size them up and decided he wasn't going to waste his energy throwing any personal charm their way. He did grow up around that generation and most certainly would have been around WWII veterans as a young boy and knew how little they thought of him. I think he saw his best bet as playing the martyr role to his flock and potential supporters on the fringe of the counterculture and the rock press of the time who were looking to "stick it to the man" as it were.

I think that in many ways, Charlie's life since his release from prison in 1967 has been, and still is, one long narcissistic-sociopathic performance art piece.

I wasn’t comparing the ‘war hero’ Older with ‘evil’ Manson, but questioning the approaches used, assuming that Manson and Van Houten did not want to get convicted.

Manson is constantly cited for his abilities to quickly and accurately size up a situation and turn things to his advantage. My point has to do with the efficacy of threatening someone like Judge Older, who had been exposed to far more violence during WWII, than Manson could ever conjure. Why didn’t Manson play the card of being a potential victim of a totalitarian system, where some lose testimony of a few scoundrels, leads to a man being on trail for his life? Something tells me that may have been a better weighted approach regarding Older. Manson didn’t need to be the one holding the newspaper with the headline GUILTY! for the jurors to see. Anyone from the Family could have done that from the gallery while Manson remained calm in the courtroom, but still receiving the benefit.

Same appears true for Van Houten. She wanted to portray the young, confused, impressionable, and drug addled youth as her primary defense. But she parses that continuity into sub-atomic pieces by lashing out at clerks and bailiffs.

Perhaps I’m the only one who sees such mal aligned behaviors because my assumption includes the Family’s collective goal of acquittal, via procedural obfuscation. They only needed to sway ONE juror to meet that goal, but needed to also act like they weren’t ax wielding maniacs in front of that courtroom.

You may be correct mrgroove, regarding Manson’s unfiltered contempt for ‘The Man’.

I may need to attenuate the common sense and self preservation a bit, and not pollute the scenario with what behaviors I would employ in order to win an acquittal; or create enough hung juries to make pursuing me impractical. I’ve been told more than once, that understanding the criminal mind is a lost cause.

This may help clarify: Manson was the Defendant you would have him be, UNTIL Judge Keene revoked his Constitutional Right to legally represent himself. Of course, Judge Keene could NOT understand why a competant defendant would motion the court for private "masterbation" priviliges.

It seems that most men with whom much power is bestowed, like to draw a "red line" before they "perform" such power. Even Charles Manson eventually had enough and said: "They" have crossed the line and now the show will begin.

The "Criminal Mind" at the time of the crime belives (thinks)that it is "entitled" to infringe on the right(s) of another person(s).