Charles Manson and the Aryan Brotherhood. 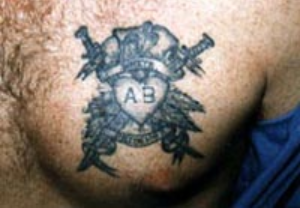 So, how and why did Charles Manson become involved with the Aryan Brotherhood?  This was something I had wondered about, and found some answers in a OUI magazine article written by Ed Sanders, March 1976.  Most of this article is about Squeaky and her assassination attempt on President Ford but there are bits and pieces of other information in the article, too.


"When Manson was found guilty, it was reported that he was greatly depressed over impending transfer to death row.  Maybe he was projecting his own hostilities over to potential black cellmates, but the story is that he felt in danger because of the racial issues: the PIG written in blood on Sharon Tate's door, his theories of Helter Skelter race war and so forth.  As the Tate LaBianca trial was drawing to a close, Manson, scrawny and measuring 5'2", could be seen practicing karate in the holding tank, preparing in case Black Muslims (who seemed to constitute the prime Family fear object) attacked him on the row at San Quentin.  It should be remembered that Manson was sent up for things that were not considered high-class crimes inside the prison system.  Not only had he planned a race war but he had been  convicted of ordering the death of a pregnant woman.

Law-enforcement officials believe that Manson, wanting to do "easy time" and not wanting to have some guy looking to establish a killer rep try to stick the sharpened tines of a chow-line bread fork into Manson's stomach - just as someone in the Family had done to Leno LaBianca -  negotiated with the anti-black, all white prison society known as the Aryan Brotherhood to protect him.

The Aryan Brotherhood has been described in "The New York Times" as a "neo-Nazi band of young toughs recruited largely from the motorcycle gangs of California's urban slums."  According to a source in a California law-enforcement agency, the Aryan Brotherhood began about 15 years ago, and at one point required as an initiation test the killing of a black; around 1967, this requirement was dropped.

The Aryan Brotherhood reportedly has connections with the so-called Mexican Mafia, an organization also situated within and without the California prison system, dealing in drugs, weapons and killings.  Its murder contracts are given to the Aryan Brotherhood to fulfill, according to prison officials.

Manson must have thought it was tactically smart to join forces with the Aryan Brotherhood, because in addition to his personal safety, he could keep track of wobbling followers on the outside.  The move turned out to be a great blunder, however, because, just as if there had been an Aryan Brotherhood operation ordered against the Family, the Aryan Brotherhood (particularly Kenneth Como) was subsequently able to split the remnants of the Manson group into two bitter factions: the Comoites and the Mansonites."

"Meanwhile Manson's problems with the Aryan Brotherhood began to move towards violence. Oddly enough, it appears that part of Manson's hassle with the Brotherhood was due to his not taking a violent-enough position in the anti-black movement.  As Squeaky wrote in a letter of June 1973: "Aryan Brotherhood moves much on pure hate, as they want him (Manson) to kill black because black is black.  He will not do this, and they are against him."  Around the summer of 1973, someone slipped Manson rat poison in a glass of Tang.  He chugged it down, but later was able to note in a letter that rat poison does not affect him very much, although it did provide him with a new experience.

As Manson lost the goodwill of the Aryan Brotherhood, Como, one of its leaders, was able to woo key women away from the Family, including Mary Brunner, Gypsy Share and Brenda McCann, by out-machoing Charlie.  In late fall of 1973 and early 1974, I began to hear reports from several law-enforcement sources that Manson was regressing.  He apparently was loath to leave his cell at Folsom Prison.  His fingernails grew long, and he was hesitant to bathe.  Prison officials, the reports indicated, had to use force to cut his hair.  They felt he was not communicating, that he was regressing, a common enough ailment in jails and prisons, which, if advanced enough, can turn a person into a staring vegetable."

The girls were also kind enough to sneak weapons onto the prison to AB's - buck knives in particular. This gave them a distinct advantage when gang fights broke out.

There was an officer in the motorcycle club that I was in that other members said was AB. I never heard him say it himself so I'm not sure. Helluva nice guy if you were on his good side. I used to hang out as his house quite often. This guy had the ability to spend time joking and smiling with you and then shoot you. I saw him hold up a guy that was already knocked out while about 10-15 other members took turns beating the hell out of him. I quit going to his house after that. He got killed in a motorcycle accident a couple of years ago.....

He got killed in a motorcycle accident a couple of years ago.....