Was The Hawthorne Shootout a Copycat Action Too?

The Manson case has an enormous amount of parallels and interesting little happenings that have kept us talking about it for nearly 45 years. It seems that we all can find interesting little facts on the case that can lead us to an investigation "eureka!. " but usually these little things that we find are merely coincidences.

Charles Manson and his gang didn't always have the most original ideas. One can argue that his entire "Family" was merely an idea taken from Krishna Venta and the Fountain of the World. One can go even further and say that the entire Helter Skelter theory was stolen from Krishna Venta.

However, this interesting little tidbit that I found came when I was checking out dates on the case timeline. What struck me was when I later picked up the August 21, 1970 issue of Life Magazine that had a huge article on the Family titled "Just Waiting for Charlie."

Since I am fascinated with the Black Panthers, I also realized that article right before this one was the story of the Marin County Court House shootings. These shootings happened August 7, 1970 and were masterminded by seventeen-year-old Joshua Jackson, little bother of Black Panther George Jackson who was at trial for murder. 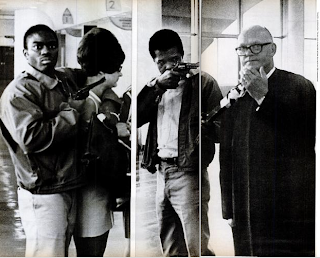 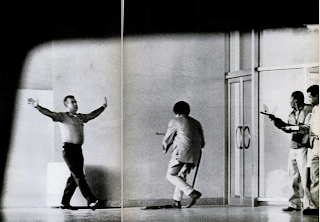 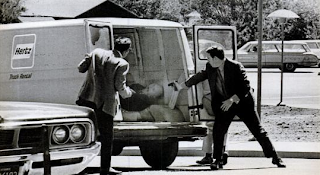 Joshua Jackson and others stormed the court room armed with assault rifles in an attempt to liberate their "brothers" who were on trial for murder. Joshua and his three accomplices took Judge Haley, the District Attorney Gary Thomas and three jurors hostage. This lead to a shootout that left Judge Haley and two of the jurors dead and Thomas barely clinging onto life. Joshua Jackson was also killed.

George Jackson was found guilty and was sent to San Quentin Prison.

August 21, 1971--exactly one year later--Catherine Share, Kenneth Como, Mary Brunner, Larry Bailey, Dennis Rice, and a "sixth suspect that fled on foot (Charles Lovett) drove a van to Hawthorne, California to the Western Surplus Store in an attempt to rob the store and acquire firearms. The firearm heist is foiled by a silent alarm, followed by police cars and a shootout leaving Brunner, Share, and Bailey with gun shot wounds.

Motives for this heist include the guns being used in a hijacking of an aircraft where passengers would be held hostage and shot every hour until Charles Manson was freed. I highly doubt this was the true motive.

Another motive--and probably the more accurate motive--was that they were planning on raiding the court room and freeing Charles Manson while he was on trial for the Gary Hinman and Shorty Shea murders. This motive makes more sense and would have been a mirror image of the Marin County Courtroom incident.

The parallels do not end here.

On this same day, Black Panther George Jackson met with his attorney Stephen Bingham to discuss a lawsuit against the prison. On Jackson's way back to his cell, guards noticed a 9mm handgun wedged in his afro. This eventually lead to a hostage-shootout leaving 4 guards and 2 inmates dead. Jackson was shot by a guard and killed.

This was planned as Jackson had written a will and manifesto.

Nearly six years later in Folsom Prison, June of 1977, Kenneth Como was involved in a similar incident with inmate Bobby Davis. The two had a 9mm handgun in their possession and planned to kill guards, members of the Aryan Brotherhood--who they were fighting with--and then escape. A shake down of the cell block came back with as many as 16 armed inmates ready to riot and a CB radio used to communicate with the outside.

Something tells me that when Life Magazine ran the August 21, 1970 Family story, that someone from the Family possibly could have read the article and read the article on the Marin County Court House shootout, giving them an idea to do something similar.

They probably did read it and get the idea.

Just like Jeffrey McDonald read the TLB article in Esquire mag and turned his house upside down.

I've always been fond of the repeating incidents within the story of the Family:

Two TLB trials; one for Manson and the girls, one for Tex.

Beausoleil has two trials for the same crime.

Grogan has two trials for the same crime.

Van Houten has two trials for the same crime.

Brunner's testimony is a confusion of giving testimony, re-canting, taking it back testifying, re-canting.

There is a lot of double repetition that can be confusing when first trying to get a handle on everything.

As to the Black Panthers taking over the court room, I do believe that it is a relevant part of the context of the Manson Murders. Threats against the court were taken seriously.

Court officials were really being killed.

Attorneys and judges were armed and given protection. I'm currently reading Katz's "Justice Over-ruled" and he makes the claim that Grogan's first trial was deliberately mistrialed by the judge because of his fear of The family.

The radio interview with Manson on the previous post is also interesting. He testified at their trial but did not support them in their insanity plea. He explains that if you do the crime you should be prepared to do the time.

He also confirms that the Hawthorne raid was to build up an arsenal to bust them out of court.

Nicely done, Dooger. The Family was Bill Gates before Bill Gates. They never had an original idea.

I saw a documentary last night about the Black Panthers and how heavily armed they were.

NOW, let's see. A prosecutor publicly convinces a jury and the WORLD that the Manson Gang was out to ignite a gobal Black & White race War!. IF you were a Manson Gang member, wouldn't YOU want to heavily arm your gang?

PS: Burton katz was Grogan's prosecutor and later became the judge who would be instrumental in securing "Clem's" release. Seems like Judical "sense" makes NO sense to most of us, but Mr. Green understands it just fine.

Dooger,
I enjoyed reading that. Thanks for your hard work.

Thanks guys. I am very interested in the (perhaps) Black Muslim and Black panther angle to Manson's thought patterns and these dates were just something that was eating at me for some time.

Robert, who was/is Mr. Green that you refer to?