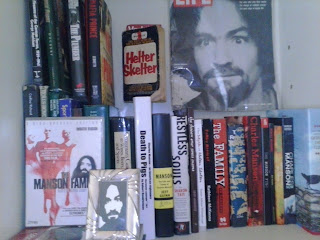 William has a great media collection, BUT look carefully at his Front COVER choises to exhibit more prominently:

"Helter Skelter," "The Manson Family" and "LIE"
Was this a thoughtful decision OR an unconscious act. Therein lies the secret to a man's soul.

whats the one with the little cars all over the jacket?

Panamint Patty said...
whats the one with the little cars all over the jacket?

The first edition of The Family,
"The Story of Charles Manson's Dune Buggy Attack Battalion"

I've read almost all of these, but the ONLY one that made me cry was Restless Souls. That tore me up. It really puts it into perspective how bad the victims families suffered afterwards. Horrible, just horrible!

That's a rare one then, with the original chapter on The Process in it! An enviable possession, William.