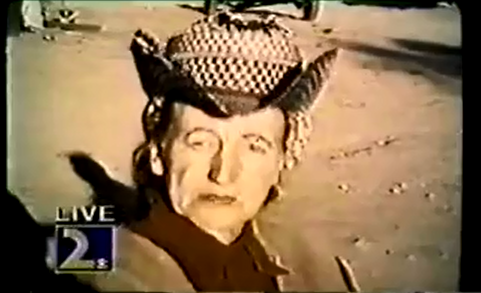 This is from a Gay Talese article written for the March 1970 issue of Esquire magazine.

The article talks about George Spahn and the ranch saying......

"Spahn bought it. [the ranch]  Spahn and his wife parted company about this time, but there soon appeared at Spahn's side a new leading lady of the ranch, a onetime dog trainer and circus performer named Ruby Pearl.

She was a perky redhead of about thirty with lively blue eyes, a petite figure, and lots of nerve.  She had been born on a farm in Sandstone Minnesota, and had a desire to get into show business somehow, an ambition that was a confusing as it was shocking to her mother, a Christian preacher's daughter, and her father, a conscientious routine-oriented railroad man.  After graduating from high school, where she had acted in school plays and won first prize in the girls' hundred-yard dash and broad-jumping competition in a county-wide track meet, she traveled to Minneapolis on her father's railroad pass, presumably to attend secretarial school and embark on a respectable career in that city.  But one day scanning the classified ads in The Minneapolis Tribune, she saw a job opportunity that appealed to her.  She applied and got the job, that of being a cocktail waitress at Lindy's, a local club patronized by, among other distinguished figures, Al Capone.

When Capone and his men were in town they were invariably accompanied by very attractive girls in ermine or mink, and were always given the large table at Lindy's in the back room where drinks were served all night.  Ruby Pearl liked serving the big table, not only because of the generous tips she received but because of the sense of excitement she felt in the Capone party's presence.  But she had neither the desire nor the time to become further involved, devoting all her free hours and earnings to the dancing school she attended every day, learning ballet and adagio, tap dancing, the rumba and the tango.  After Lindy's was raided by the police and closed down, Ruby Pearl supported herself as a bus girl in a cafeteria, pouring coffee and clearing dishes.  Soon she caught the eye of the assistant manager, an engineering student at the University of Minnesota.  He became her first lover and husband, and after his graduation he was hired by Lockheed in Burbank, California, and the newly married couple set up housekeeping in a motor court on the fringe of Hollywood.


On certain evenings, together with other young engineers from Lockheed and their wives, Ruby and her husband would go to The Brown Derby and Ciro's and various night spots where there was live entertainment and dancing.  Ruby invariably became restless and tense on these occasions, seated around the table with the others, sipping her drink, and wishing she was not with the dull wives of engineers but rather that she was in the spotlight on the stage, and kicking up her heels.


Her marriage did not produce children, nor did she want any.  She wanted to resume with her dancing, and she did, attending classes conducted by a sleek French-Indian adagio dancer who later gave Ruby a part in his touring trio that featured himself and his jealous girlfriend.  Ruby also danced in a chorus at a Hollywood club for a while, as her marriage deteriorated and finally ended in divorce.


About this time, approaching an age when she could no longer maintain a dancer's pace, she was introduced, by a man she had met, to a new career of training dogs to dance, sit, jump through hoops, and ride atop ponies. She had a facility for animal training, and within a few years had perfected an act with three dogs and a pony that was booked at several community fairs in Southern California, in addition to a number of schools, circuses, and local television shows.  At one community fair, in Thousand Oaks, she met a man, a wrestler, who would become her next husband.  He was a burly, strong, and tender man, who had done quite well financially, and he also owned a restaurant on the side, a subject of interest to Ruby because of her days as a waitress.  Not long afterward, Ruby met another man with whom she had much in common, a proprietor of a pony riding ring for children and a movie ranch--- George Spahn.

Who was the wrestler?

Orwhut, I don't know. The only thing I can say for sure about Ruby Pearl is that her name wasn't Ruby Pearl, to paraphrase Dylan. And it's driving me nuts!!

Thank's Deb. Maybe someone else will tell us. He might have been one of the famous ones.

Wow that was super interesting, thanks!

Deb,
It really was a great article. In my excitement to find out the name of the wrestler I neglected to mention that. Please forgive my rudeness.

Hey, all I did was find the article, we should all thank Gay Talese! There is so little known about Ruby and this was about all I could dig up that hadn't been said over and over again. : )

Whut, you could not be rude if you tried.

And yes, Deb does RULE

Here's a coincidence: When I attended Valerio Street Grammer School in Van Nuys, in the late 1940's / early 50's, Ruby Pearl and I think George Spahn also brought their animals and put on a show for us kids.

Because of her relationship with George I was unclear about his "relationship" with the Manson Girls. At the time I was there, Ruby would go home at night and the Manson Girls would watch over George. The complete story of Ruby, the M Girls and George would make for an interesting story.

Mr H, did you ever during your time around the Fam ever get the impression that George was fearful of them? What about Ruby?

Ann, Patty remembers that too, that Ruby was the last to see Shorty alive.

Patty has the flu today. Mr. Patty just brought her the mail, with a weird look on his face. "It's another one," he said.

Yeah Patty knows Matt doesn't like it when she talks about this stuff openly but let her tell you what it says anyway:

In the background is a picture of Patty someone pulled off of facebook. It's her and a bunch of kids from youth group posing under a portrait of Ronald Reagan with Atty General Ed Meese. The narrative says: "The Eyes are the Window to the Soul. The eyes may also help diagnose mental disorders such as schizophrenia, depression and autism. Researchers have long reported irregularities in the eye movements of patients with mental disorders. Schizophrenics are often unable to keep their eyes focused on slow moving objects. These abnormalities, researchers say, reflect defects in the neural circuitry of the brain."

Hahaha. Very funny. Yes, Patty eyes are goofed up in the photo. You know why? Patty was 17 and away from Mom and Dad Patty for an entire week in DC. As such, she and the other kids had a bathtub full of beer, and Patty'd had a bit too much before getting on the subway. We all had to stop for me to pee...

Patty just found out that Ed Meese lived next door to her friend "M" on Mt. Helix (he was supposedly a member of our congregation but Patty NEVER saw him on Sundays. "M" had some rather large parties there, right next to the "just say no" guy.

A month after the pic that stalkerman just sent, I got an invite in the mail to a Dan Quayle prayer breakfast. Its in a shoebox somewhere in the attic...

You know what really pisses Patty off? That ass-hat stalkerman thinks mental illness is a character flaw. Did you know that one in four people is affected by a mental illness? This is what Patty heard Glenn Clos say on NBC the other day, she doesn't know if that is absolutely true, but is seems plausible to Patty.

Why is it ok to taunt someone for being schizophrenic when you'd NEVER do that to someone with cancer or kidney failure?

I don't recall witnessing ANY man or woman over 80 years old ever exhibiting FEAR of anything, EXCEPT losing their HOME / PROPERTY and George couldn't PAY his Property TAXES. So Charlie Manson, at least once, rescued him from missing payment of his taxes. BUT George eventually did have to sell-off part of his beloved Ranch to Frank Rietz. Of course, NOW you are treading dangerously close to the "Shorty" motive.

At the time, before Prop 13 was voted in, the State of California was literally having old folks thrown into the streets for NOT paying their EVER increasing Property Taxes. Old folks were even living on DOG food to survive. As much as THEY might have smelled, the Manson Family kept George Spahn out of an Old-folks home, as long as they could. Of significant NOTE here, the "STATE" eventually got HIS property. Unfortunately, one may need a college "education" to understand the real lesson here.

P.S: IF you watch my films, the ONLY "ranch hand" you will see helping-out around the Ranch is Jaun Flynn and he was deeply associated with the Family.

I think I read, maybe BPT, that Ruby's first name was Martha. As for her last????

Mr. Spudnut, Martha was George Spahn's wife's first name. I read that too at BPT and I think Michael knows better because I sat with him and a couple other of the bloggers at George and Martha's gravesite last year.

Care to make it interesting, Deb?

What do you have in mind, Matt? California has some nice wine, what does North Carolina have that I might like?

If the Panthers win, I get to out the letter writer.

And that benefits me how???

You get to sit back and laugh.

I was a live-in staff member of a schizophrenic group home for a while.
I don't know, Patty :(

hey girl...thanks for your nice note.

Damn, and both the Saints and the Panthers lost. Perhaps karma can snap back this Sunday.

Matt, I may have some jets news for you soon.