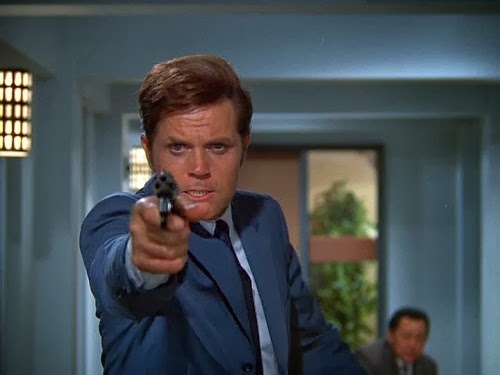 Sitting here watching Netflix, and found a bunch of seasons of the old (and best) Hawaii Five-O shows from 1968 and on. I couldn't believe my eyes when I watched an episode entitled "Up Tight" from Season 1, episode 14. In this episode, young girls are being fed drugs, and getting brainwashed by an older, charming, charismatic dude named "David" who tells the girls that "all is one." He also won't take any of the drugs himself, UNTIL.....Well, won't tell you anymore. You will have to watch it! Sound familiar? The guy who played David in this episode also had dark hair, and a huge unibrow. Of course, there are differences too, like the character being an ex-professor, ala Timothy Leary. Hey, I wonder if Charlie ever watched this episode when it aired in 1968? For those of you who don't have Netflix, it might be on YouTube. I guess there were a lot of "Manson-like dudes" running around all over the place way back then!

No comments from all you good people? That's a first!

Maybe I should have said, book him, Anno.

Can we tag this w Netflix? Ann, Patty sees the Manson archetype all the time in these older shows. He is was and probably always will be the boogie man under the bed.

Patty, how do we do that? Yeah, I love older shows. Hawaii Five O is still my favorite. This particular episode made me think right away of Manson. Like I said, there must of been a lot of Manson-type gurus running around back then. I've always wondered why people said there were no televisions or radios at Spahn ranch, yet they watched news reports of the Tate murders on tv. Did anyone there possibly ever watch shows like FiveO I wonder? If so, did they see the similar characteristics?

COMBAT was my favorite show. I always watched Combat, cause...
- Brenda McCann

Did they have TV at the ranch? In one of the films the Family watch the murders being reported on the news and cheer, but I always thought that was silly. I can't imagine too many hippy communes had a set around so they wouldn't miss any I Dream of Jeannie or Brady Bunch eps.

Little Paul in his book mentions watching Yellow Submarine (on acid) in cinemas when it came out. I also like to pretend they watched Barbarella. The way she greets people with a Fascist/Roman salute while intoning "Love" reminds me of the Family for some reason. And I'm assuming one of them saw Rosemary's Baby since they seemed familiar with it..

Here is an excerpt from this interesting article about Bugliosi's summation:


"She said the first time she heard about the Tate murders was on TV the day after the murders. She said she was watching television when Susan Atkins came into the trailer and wanted to watch the news. Susan asked Barbara to turn the channel, and Barbara turned it to Channel 2 for the six o'clock news. She said Sadie called Tex and Patricia Krenwinkel into the trailer, and she is pretty sure that Tex and Katie actually came into the trailer to watch the news. She said the group watched the TV account of the Tate murders. At one point a couple of the group watching TV laughed.

Unbelievable! Unbelievable! Watching the TV account of the Tate murders, and they are laughing, ladies and gentlemen. Can you believe it? Stop to think about it for a moment. Yes, five people being brutally slain and butchered like animals is a rather amusing event."

Leslie Van Houten also said they watched news reports of the murders on tv in one of the trailers. I also know Barbara Hoyt said she was watching something on tv when Sadie came in, and made her change the channel to the news. I am sure most of them didn't spend too much time watching tv though. Living in a place that beautiful, I certainly wouldn't of been wasting time sitting inside in front of a tv.

The television was in George Spahn's trailor.

Wow, so that part (laughing at the TV news) in the film wasn't bullshit (maybe)! It seems so stereotypically evil I just assumed the film-makers made it up.

A prisoner is broken out of prison ward County General Hospital. His name is Joey Hopper & his followers are referred to as The Hopper Family. The Family consists of alienated youths who view Hopper as their spiritual leader. All escape routes out of the city have been closed & SWAT's job is to conduct a sweep of the city & find them. Hopper's goal is to exact revenge against all who prosecuted him....including Hondo Harrelson.