Freedom of Information, My Ass! 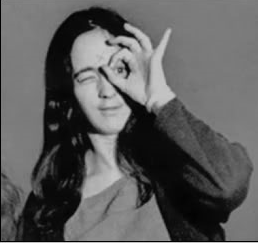 A Freedom of Information Act (FOIA) request can be made for any documents relating to a deceased person that might be on file with the United States Department of Justice/Federal Bureau of Investigation. I sent a request for any FOIA documents that related to Susan Atkins and was completely surprised by the reply I received from the DOJ/FBI.
They told me "Records which may have been responsive to your request were destroyed on March 1, 1993 and October 28, 1994.  Since this material could not be reviewed, it is not known if it was responsive to your request."


The FBI retains documents on many people and old cases, some dating back to the 1920's and quite a few of them are available online to peruse at the FBI Vault.  Why get rid of these particular files?


And, why would they have destroyed files in those particular years? There is so much still up in the air about whether or not the Family was involved in any other murders. We have the Tex tapes and the LA DA's office saying they are looking for connections to other murders 20 years after these files were supposedly destroyed. There is still much to be learned about the Family's activities, as least from those of us who are lay people not connected to law enforcement. Was there something so incriminating to who they considered the "wrong people" in those files that they had to be destroyed because they would make the government or law enforcement look really bad?
I guess I will just sit here in my tin foil hat and cogitate what it could possibly be that the government doesn't want us to know. 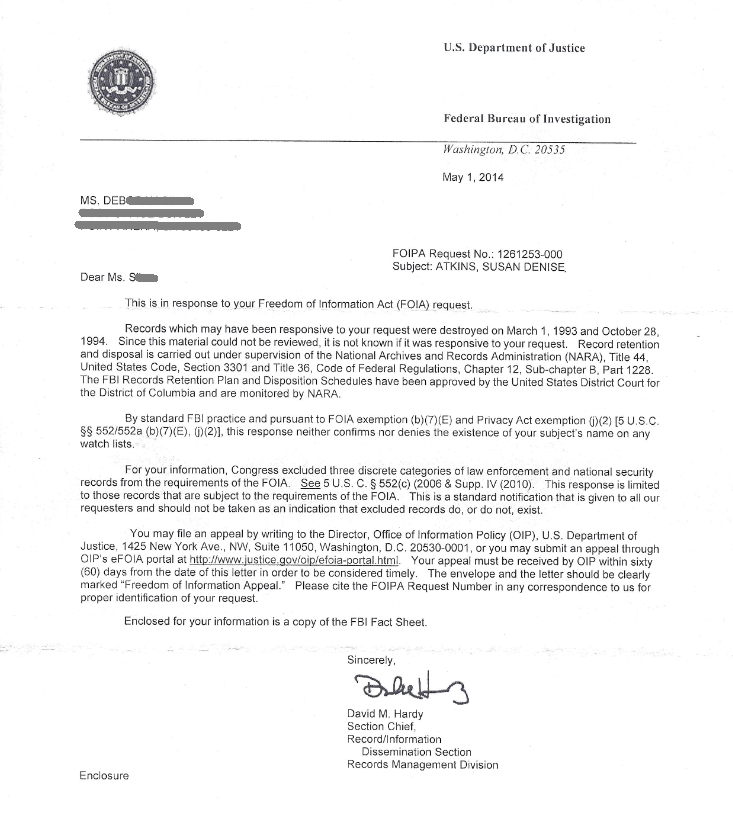 The FBI ONLY gets involved IF there is a Federal Crime involved OR if a local law enforcement organization REQUESTS the FBI's HELP in connection with a STATE crime OR if a civil rights violation is involved.

Many times though, a STATE crime may also involve a Federal crime (IE: Drug dealing) In such a situation, the Feds can cherry-pick which crimes they wish to get involved with. Thus, for a law enforcement agency to get involved usually relates to a political agenda.

So, where might the crime(s) of Susan Atkins seem to roost ? Black and White race WAR / Final Battle of Armageddon ? Well, that seems like a job for Superman OR a "shrink" OR the CIA ! Time to pass the buck!

WHAT'S ON THEM TAPES?

Do the ends justify the means? And if so, who gets to decide? Patty thinks someone is pulling the wool over our eyes.

Susan's first big arrest was in Oregon in 1966. She faced concealed weapons charges locally and after she was convicted of receiving and concealing a stolen weapon for which she was given a suspended sentence and placed on probation she was then arrested by the US Marshall's and brought back to California to face federal car theft charges.

She and her two cohorts had stolen a car in California and crossed state lines thus triggering federal charges. So, yes, she would have generated FBI documentation. This was pre-Manson but any subsequent arrests would have lead to a check of her previous record. This was one of the reasons why Susan usually gave her name as Sadie Mae Glutz, to avoid her record in her given name and the fact that she violated her probation. All of this did eventually catch up to her once law enforcement realized Susan Atkins and Sadie Mae Glutz were the same person. I believe this finally came to light when she and the other girls were arrested in Mendocino County.

In Mendocino County the charges were dropped against all but Susan and Mary Brunner. Susan did end up serving some time for her probation violation.

The document says you can appeal a decision made regarding and FOI request. I wonder if you can appeal the decision citing that there was a distinct lack of transparency as to why the documents you requested to view were destroyed. You may very well encounter a brick wall but if it were me receiving such an oblique answer to an FOI request, I know that if I didn't appeal within the 60 day time limit, I'd totally regret not doing so,

You have to love the FBI's "covering-our-asses" disclaimer surrounding that the person(s) existence in any FOI request is neither confirmed not denied. They did kind of paint themselves into a corner with that one - it's like saying "we destroyed the documents of surrounding the person on such-and-such a date, although we're not confirming the existence or non-existence of this individual".

Bucpaul, that's not a bad idea. I initially chuckled at the thought that I could appeal something that the FBI said didn't exist. The worse thing that will happen is that they won't give me an answer, citing that they can't say because the memo ordering the documents to be destroyed has itself been destroyed! :-\

Maybe Ed Sanders wasn't that far off base.

A couple of years ago I tried to get a copy of my FBI file. I received a letter of denial. I don't remember the exact verbiage but it was something about my reason for wanting it wasn't good enough.....

Let's see, by hook or crook, the "government" (FBI, CIA, cops, etc.) obtain information - at the public's expense - then USE it against the public, as they will, AND then destroy IT if they no longer have a USE for it. Anyone else see the word SUCKERS in that?

Comadreja and Robert: yes, and yes