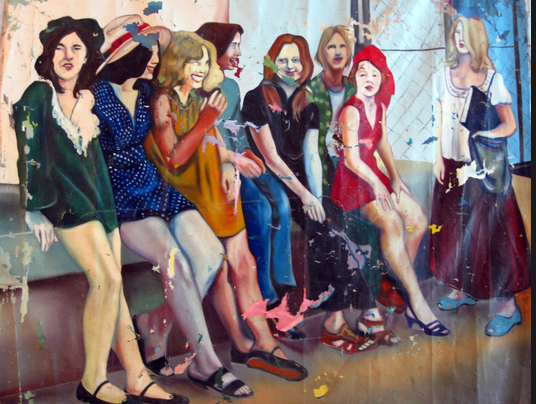 "Charlie, you know given the ranch a black name."

What does that mean?

What the hell? Why did it come out like that? I usually have one or two typos at most, but I don't remember it being that bad when I typed it. It was supposed to say "Charlie, you know, your given the ranch a bad name."

I am laughing my head off at your typo. I think it must have been something subliminal!!

Anyway, I am surprised at Catherine Share being such a racist given her own family background.

One of Manson's most repugnant characteristics was his racism.

I always laugh at Bobby B's onetime membership of the Aryan Brotherhood in prison, when it is said that the head of the California Parole Board, Mr Anderson, is a colored gentleman.

Why would any MAN bring his beloved WIFE to a den of vicious vultures, knowing they would love to devour HER special kind ? "Here my love - make yourself confortable in this dirty, smelly, RACIST's chair

Maybe it's kind of like: "I like Mr. Hendrickson's comments so I'll poach a couple of HIS Manson Girls photos.

OR maybe it's as simple as " Not only did I pass legislation to give the Black people THEIR civil rights, but I provided JOBS for all the young BLACK boys with JOBS - in the rice-paddies of Vietnam - cause I'm NOT a RACIST." US Democrat President Lyndon Johnson

Patty had never heard the "don't sit in the same seat" thing. That sucks ass.

Who did the artwork at the top of this post? It's really stunning. I love it.
It seems that a lot of the really bad Manson stories have the name Sue Bartell in them. She seemed downright mean and evil.
I sometimes think it was Sue Bartell that killed Zero. Sometimes I think Bruce Davis did it. i'll probably never find out.

Barrie, that painting was done by an Oregon artist by the name of Loren Hillman. I like it too. Lots of colors.

Robert, I saw a documentary on LBJ a few years ago and it was said that when it was time to sign some civil rights bill he supposedly said something like "let me have that n****r bill so I can sign it". He was a phony in my opinion.....

"Don't sit in that chair or you will get black person germs!" Just shows you how very young and immature these girls were. That is school-yard level stuff.

Not only was he a phony, but Howard Hunt (in his deathbed confession) named him as being complicit in the JFK assassination.

I never understood why the Family accepted Gypsy, her being Jewish and all.

EQ & B-paul: IF you can begin to understand the MANSON "mystique," tell me WHY was the "creator" of mankind such a total RACIST ?

PS: Thank you for your thoughtful comments

Why the "creator" of mankind created some specimins of the human race will always be a mystery to me. However, if we lived in a perfect world with perfect people, it would boring!!

What fascinates me about the Manson related cases is that a bunch of 'nobodies' from the wrong side of the tracks are more compelling, interesting characters than the wealthy and famous people that they murdered. A collection of people like Charlie, Squeaky and Donkey Dan? LOL. A line-up like that only comes along once in a lifetime.

what is the "big" revelation here? if you know anything about the Spahn ranch group- racism Is a well known, long known fact DUH!

Candy, several of the girls have mixed children and grandchildren. what does that say? Patty thinks that the racism was there, but not universal.

Patty perhaps NOW they have -are you referring to children at the time of Spahn>? Isnt this the topic the racism then?

Candy if Patty is getting your drift, you mean that peoppe can and do change?

Would Patty correct me if I am wrong in saying that Bobby's grandchild through Gayle Massman is mixed race?

I always wondered why they accepted Juan Flynn being the latin american he was, until I saw his pictures. He was pretty caucasian.

Manson in turn looks very mexican to me, I suppose he was totally unnoticed as an american while in Mexico in the 50's.

Is it correct to suppose Charlie's racism is an heritage from the prison system, plus the KKK (via his Uncle Jess)?

Maybe white to them meant not black or Asian? Patty's older relatives have their favorite prejudices. Those who lived through WWII don't like the Japanese, those who remember the zoot suit riots don't like Mexicans. Racism in general was more aboveboard than it is today, Patty thinks.

love the painting who is it by.

Patty ya Im sure racism existed ( seems like it from history) at Spahn yes people could have changed some of them may not have even been racist, but just following suite, Im not even sure if they were/are racist so much as just in the mindset of not mixing race and keeping your own race pure