A new interview with Roman Polanski by James Mottram.

Roman Polanski arrives for our interview with a smile. Which is a relief. The last time we met, around the time he made his 1999 satanic thriller The Ninth Gate, I asked him about his “notorious” reputation in the media and he near-enough boiled over. “How can you ask such a question?” he steamed. “What is ‘notorious?’ I think you’re too much a victim of the media, and I would rather be known by my work than my notoriety.” 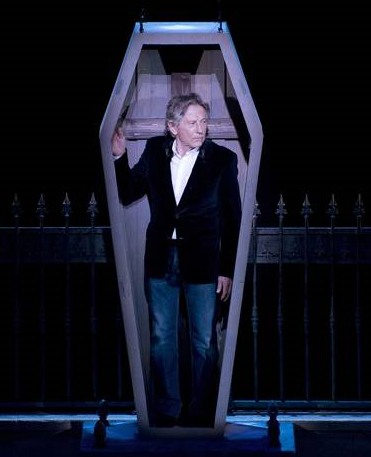 Here's an interesting idea: Why NOT have a TRIAL for Polanski regarding his rape of the 13 year old girl (if Polanski wants to attend GREAT - if not, that's fine also). IF HE does NOT attend and HE is convicted, his SENTENCE should be a great big $$$ FINE $$$$ - like 5-10 million dollars. Then when HIS movies play in the US, HIS share of the proceeds can go to pay for HIS fine. Otherwise, isn't HE (to some extent) benefiting from the notoriety of HIS crime.

This judical concept is practiced everyday via the "traffic ticket" procedure. YOU can simply NOT attend any court appearance by paying an outrageous $$ FINE Otherwise, YOU can appear in court and make a deal with the judge for a lessor $$$ amount - OR you can go to TRIAL and pay a bigger $$ FINE IF you lose.

It's all about the $$ money, so why doesn't the government make some more $$$ off the "better-off" folks like they do off the bottom end of the middle class.

Instead, we have a California guy serving 50 YEARs in prison for shoplifting "video tapes" from K-mart.
HIS mandatory 50 year sentence was UP-HELD by the US Supreme Court and WE are paying a grammer school educated prison guard over $50,000 a year to babysit a SHOPLIFTER.

Has nobody else figured it out - WE law-abiding citizens LOVE our PRISON system - cause it makes us on the outside FEEL free.

I do not know anyone that does not believe that there is room for improvements in either our judicial system or our corrections system. That being said, the reason someone may be spending 50 years for stealing videos is not because he stole videos, but because he had already been given two chances prior to not commit crimes, but he chose to anyway. Society has grown tired of people who disregard both the law and the contract with society to obey laws, and then watch those same people repeatedly break laws and demand little or no punishment for their willful acts against society.

By the way, that guy who was convicted on his third strike, committed many more crimes for which he was not caught. Society pays for those costs via increased prices from products to insurance and beyon.

Is that all it needs?

The five foot pole you wouldn't want to touch anything with looks good in a coffin, which is where all child molesters should be.....

Seems like we are all on the same page.

Of course there are MORE crimes / incidents where "bad people" didn't get caught. Just look at JFK and Clinton and ???? how many young girls did they really get pleasure from at the taxpayer's expense, OR how many child molesters really swim in the Sea of Holiness ? How many other "underage" girls did Polanski actually rape ?

How many other "hits" did Oswald and the guy that wacked King really execute before getting caught.

AND with relevance here: How MANY other violent ACTS did the Manson Family commit, other than those the cops know about? AND how many cops KILL folks - just cause they can ?

Friday I went to Court regarding a "red-light" camera scam LA has been using to generate $$$$.

To make a long story short: On the way, I asked a man, who was returning from lunch, which Courthouse I needed to enter. As six-degrees of separation would have it, we ended up in a 20 minute conversation. He's a DA and knows Bugliosi, Stoviz, Kay, etc and of course saw the 1973 MANSON film, BUT how about this: He went to school with Tony LaBianca.

We only stopped talking because I had to get to Court and he had to get back to work, but we will likely hook-up again. Point being, CRIME is a bad thing, but sometimes good things come of it.

you know that feeling you get when somethings about to happen? Patty does...