Since we are on the topic of The Process, Patty has bumped this one up from our copious archive of drafts. Blog reader Zachary sent in the following interesting tidbit for your viewing pleasure: 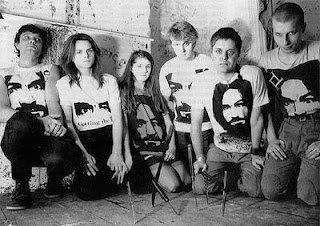 "Saw this today, an old shot ('80s) of the band. Genesis P-Orridge pushed the envelope, is pushing it still, now part woman.

We spent time with them in the '90s, went to their shows. He was into Crowley and the occult big-time, and into cultural shock in general. He was also at one time involved with the Process Church of the Final Judgment."

In 1969, (s)he joined a British commune where (s)he was forbidden from sleeping in the same place on consecutive nights. Food was cooked at irregular times of the day and all clothing was kept in a communal chest. This was done to throw everyone off of their daily schedule and make them more susceptible to suggestion. (S)he left after three months. 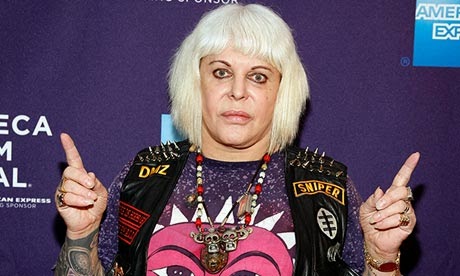 In 1981, (s)he founded Thee Temple ov Psychick Youth, which was a cult: TOPY-CHAOS in Australia, TOPYNA in North America and TOPY Station 23 in Europe. Sub-stations called Access Points were located throughout America and Europe. The group focused on psychic phenomena, chaos, atheism, magic and "guiltless sexuality." The musical expression of this cult manifested in the band Psychic TV, which is pictured above with switchblades and Manson tees. The man at far right also has a Process Church symbol on his right shoulder.

You know, in general, Patty doesnt believe that the Family was "brainwashed" but Charlie did employ some of these same disorientation tactics to maintain control...like, the communal clothing chest. Lots of similarities, many of them rooted in Scientology.

And a Beach Boys reference with (an out of sync video) for Good Vibrations:

thanks Christopher...sorry Patty flaked on your stamps, still need em?

Patty, Don't worry about the stamps.

Essentially what I was after was the 4 hour or so interview with Lutesinger in Inyo County when she managed to snitch everybody up before Atkins had even thought about it.