Patti D'Arbanville admits to having slept with Charles Manson

From today's blog, one of the "Blind Items Revealed":

I was doing some research on a film from back in the day that has come up a few times in the past week. It has come up because the star of the film has some other projects she is plugging now and a lot of the old stories about the movie are resurfacing. There will be a blind about that movie next week. while doing the research though, I saw one of my favorites in the cast list and clicked on her name to see what she is up to now. When I clicked, I had to blink a couple of times because I thought to myself that couldn't be right. She would never do that. It turns out she would. She is an actress who has literally been around forever, but never looks old. She is considered a mostly television actress and had a nice long run on a hit cable television show that ended not that long ago. She is known though for something much more important in history. I consider her to be the first "it girl." The first time that term may have been used. That is a big honor. Anyway, she has a secret that she only shared with a few people who got drunk with her back in the day in the club that will never be duplicated. She says she had sex with one of the most infamous people in history. She had so many details that no one left an encounter with her doubting her story. As far as I know she has not mentioned it to anyone in decades and my source from that club who was there every night and is still friends with her today says she never mentions it. She is afraid of the damage it might cause her career now. So, that is what makes what she is doing now, so damn interesting. 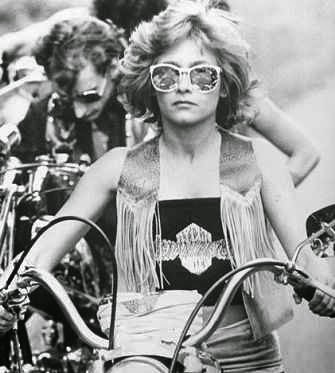 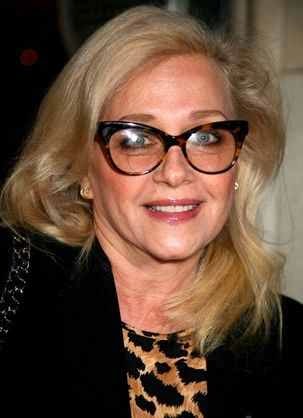 Excerpt from an interview with Patti D'Arbanville by Bob Colacello from the April 1973 issue of Andy Warhol's Interview magazine: 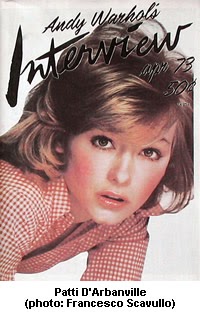 "Patti D'Arbanville is a young actress who has appeared in three films to date: Flesh, L'Amour and La Maison, which was a critical and commercial success in France. She has been through the pop hippy scene in New York and California, the rock groupie scene in London, the chic ready to wear scene in Paris, always travelling fast and light. Now she is back home in New York, waiting."

Bob Colacello [turning on the tape recorder]: It's on. Talk.

Patti D'Arbanville: Well, I just got back from my ballet class... (phone rings)... Hi, Candy... Taking an interview... How's your play doing?... Did you get kicked out of it or did it close?... Oh, well, keep the faith... You're going to do nightclubs?... In New York or the Catskills?... How'd you get that together?... That's always it, being in the right place at the right time... Okay... Bye. You know, when I get in front of a camera I really feel fantastic. The only thing is when I'm in improvised films I just tend to overact because there's no real direction... There's such freedom in something like L'Amour that I just run wild. I mean, at times I was just foaming at the mouth. I haven't seen the film, just some rushes of me in the bathtub, and I was quiet for a change. But I just love being in front of the camera... The last time that I was on stage was in the fourth grade... Oh, wait, I know: I never did a play but I did this fantastic fashion show for Ossie Clark in London. He made these fantastic clothes for me. Amanda [Lear] was in it. She's supposed to be a sex change but I don't believe it... Anyway she had on this fantastic g-string and was running around pulling up her dress... It was at the Royal Court Theatre and it was my birthday and I was really fantastic.. That's my only stage experience since fouth grade but it was pretty good...

I went to PS 41 on Eleventh Street. I grew up on Bleecker and Macdougal. The Figaro was right across the street. One time I asked my mother if I could stay out until midnight, and I was sure she'd say no, but she said, 'Well, of course, it's only across the street.' So I used to stay out every night until midnight, then it got to one. I would fall asleep at school. I couldn't stand it. So I quit... I was fourteen when I quit. I stuck it out for two years afer I started going out, but when they started telling me they were going to take me away from my parents if I didn't come to school more often, I had it...

Then I started going to Ondine. That's the club Jerry Schatzberg had with what's his name, the French guy that owns Hippopotamus now, Olivier Coquelin. The first time I went there I was fourteen and I had identification that said I was 18. Of course, nobody believed me, but I had such balls they let me in.

Then I decided to go to California and I left with these two girls and my best girlfriend who was pregnant. We had spent all the money for her abortion on mescaline and spent three nights in a hotel with some boys freaked out on mescaline. We got $1,000 for the abortion by going up to this guy in Ondine and asking him for it. He wrote out a check right there and the next day we went down to his bank on Wall Street and got the money. Then we drove across the States in a four-cylinder mustang. With my girlfriend pregnant and these two strange girls who turn out to be dykes. We fought all the way there over whether the window should be open or shut. I ended up hitting my girlfriend and she threatened to stab me, so I left. I went to live with this guy named Stanley who was some creep who lived right across the street from Harlow's house in Beverly Hills. I stayed for two months and went back to New York and went to Max's a lot with my girlfriend who had by this time had her baby and gave it away. I made Flesh then, I think. Then I went back to California, back to New York.

Then Bert Stern took me to Paris to do the collections. From there I went to London and stayed at Donald Cammell's house for a couple of months. I loved London, the whole scene there. Then I went to Paris to make this movie called La Maison, with Michel Simon... I should've gotten an agent then, but all I wanted to do was get to London and spend all my money, which I did.

Then I went to Hollywood to do a movie with Nic Roeg, who had made a name for himself with Performance and Walkabout. It was called Deadly Honeymoon... but it didn't work out. Jim Aubrey didn't like what Nick had done to the script or something, and Nic wouldn't do it any way but his own...

I just have to be by myself for awhile to do what I want to do. It's good to be alone sometimes. Look, Steven wrote that song [Lady D'Arbanville by Cat Stevens] when I left for New York. I left for a month, it wasn't the end of the world was it? But he wrote this whole song about 'Lady D'Arbanville, why do you sleep so still.' It's about me dead. So while I was in New York, for him it was like I was lying in a coffin... he wrote that because he missed me, because he was down... It's a sad song.

I just saw that Patti D'Arbanville is in the cast of Manson Girls. The one person in the cast who looks to me like the original person is Eric Balfour as Bobby Beausoleil. That looks like good casting. Most of the actresses are too pretty to be Manson girls, or just not the right look.

Breaking News:
Chaos takes over the town of Ferguson AGAIN. It's looks like zombies are going bizzerk !
Like some kind of EVIL force is in control. Protestors are going crazy violent
Look -out Helter Skelter. It's coming down fast NOW.

Oh Shit, is Charlie Manson up to his Devilish deeds AGAIN.

That's it - He's had 40 years to perfect his super-duper powers and now we are all up shit's creek.
Thank God the "establishment" was smart enough to provide small towns all across America with weapons from the Penatguns super-duper arsenal.

BUT wait, it may be too late, Oh NO it's the "CURFEW" Forget about Helter Skelter - the dreaded CURFEW will get us ALL. Heeellllppp !

Patti D'Arbanville has to be one of the few people who can out-do Courtney Love in terms of namedropping the most people in a single stream of consciousness.

Robert, there's something happening here - what it is ain't exactly clear...

"He turned around and he looked just like the devil. I said 'We're in Hell' And he said Ain't it groovy."

Watching Ferguson is like living life 50 years ago. What goes AROUND comes BACK around.
What a trip !

Just woke up to see reports of a woman who survived the Holocaust being apprehended for protesting.

To say that the eyes of the world are upon Ferguson at the moment is a grotesque understatement.

YOU are seeing HISTORY as it happens. If you could just touch the tattoo on that woman's arm, YOU could begin to understand EVIL. Some 20 years ago I coined the expression "Nazibation." NOW, you are witnessing the cops "perform" Nazibation just as the National Socialist Party did decades ago.

I have 4 original old lunch counter stools from a Woolworth's down south. To sit in one of those stools - you would begin to understand what Black folks are so upset about.

I wonder if the Nazi symbol, carved in Manson's forehead, is maybe meant to remind US all that Socialism ain't such a COOL "program" - after all is said and DONE.

Robert Hendrickson said...
I have 4 original old lunch counter stools from a Woolworth's down south. To sit in one of those stools - you would begin to understand what Black folks are so upset about.

Robert, I actually ate at that lunch counter before Woolworth's went belly up. It's not far from my office. They have converted it into a civil rights museum.

One of the worst things I've ever seen was at the National Civil Rights Museum in Memphis. The burnt-out hulk of a firebombed bus from Alabama in '65. Evil literally wafted off that bus in waves. You could almost reach out and touch it. As an empath and WTH, semi-clairvoyant; the only other object I've ever gotten that much evil from, to the point of feeling sick, was the pair of boots John Wilkes Booth (sp.?) was wearing when captured after Lincoln's assassination. In the museum at Ford's Theater, in the basement. Objects retain imprints.

She also portrayed Cathy Smith the woman that gave John Belushi the fatal injection of heroin and cocaine. Cathy Smith did her time for killing Belushi with the notorious Manson girls, Kremwinkle, Van Houten and Atkins. Now another interesting factoid is Don Johnson daughter Dakota Johnson portrayed Squeeky Fromme in Tarrentinos 2019 movie. You know Don Johnson was the room mate to homosexual 1950's movie star Sal Mineo. Sal Mineo was brutally murdered in 1976 Manson style. That Don Johnson is so damn lucky because if not for the grace of god that boy could have very well have become Bobby Beausolia (spelling is bad I know). Someone should interview DJ and ask him some very tough questions.