Patty wasn't completely sold on the idea of creepy crawling the ranch on the 45th anniversary of the Tate LaBianca murders since during a nap right before the event she had a scary dream. It kinda freaked her out at first, but you know, a little fear is good. It keeps us honest, no?

Around 8:30pm under a full moon, Patty and her guide ventured down the familiar old path to the Manson Cave, with only a flashlight and the light from the biggest supermoon of the year to light their way. 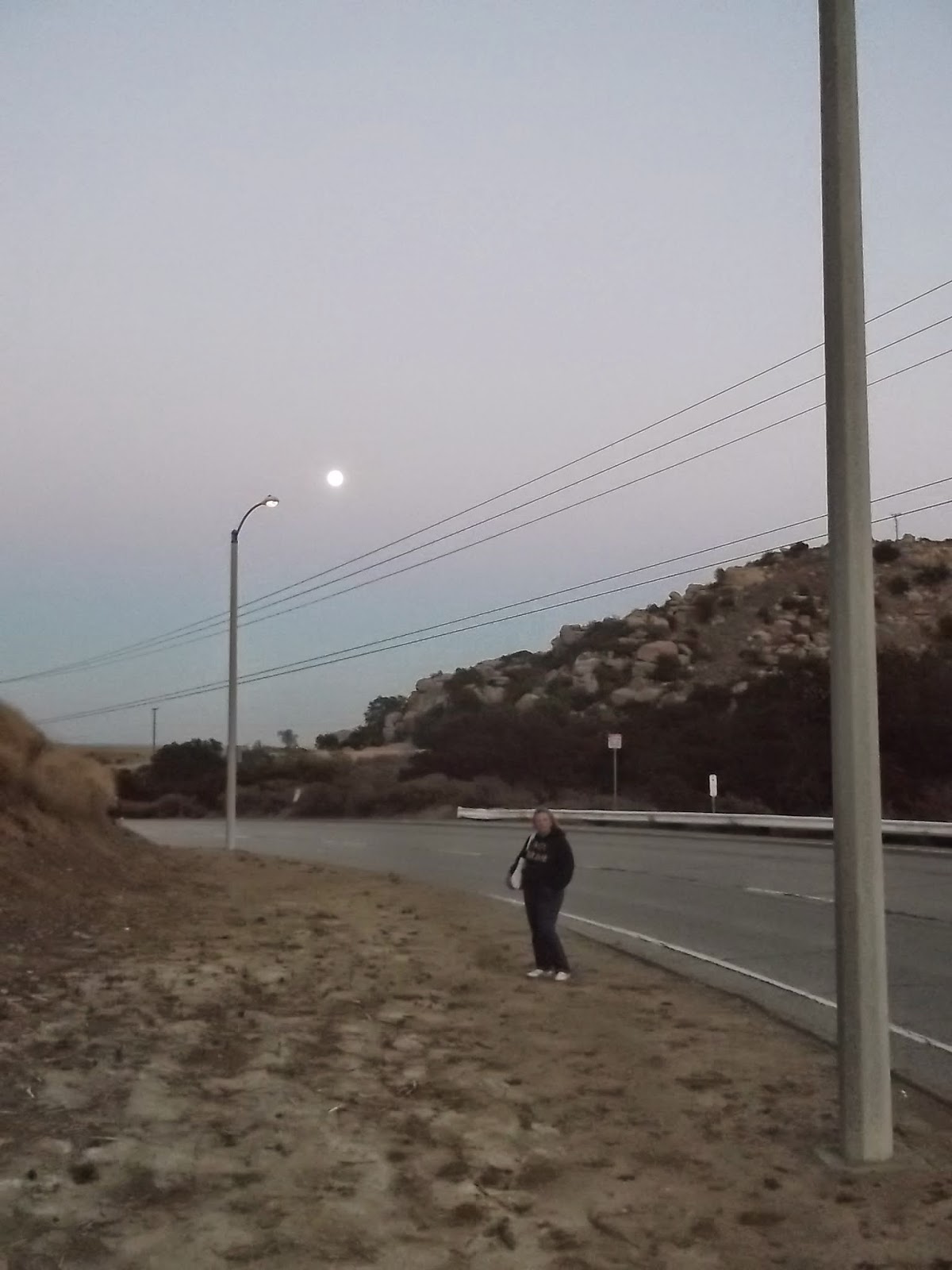 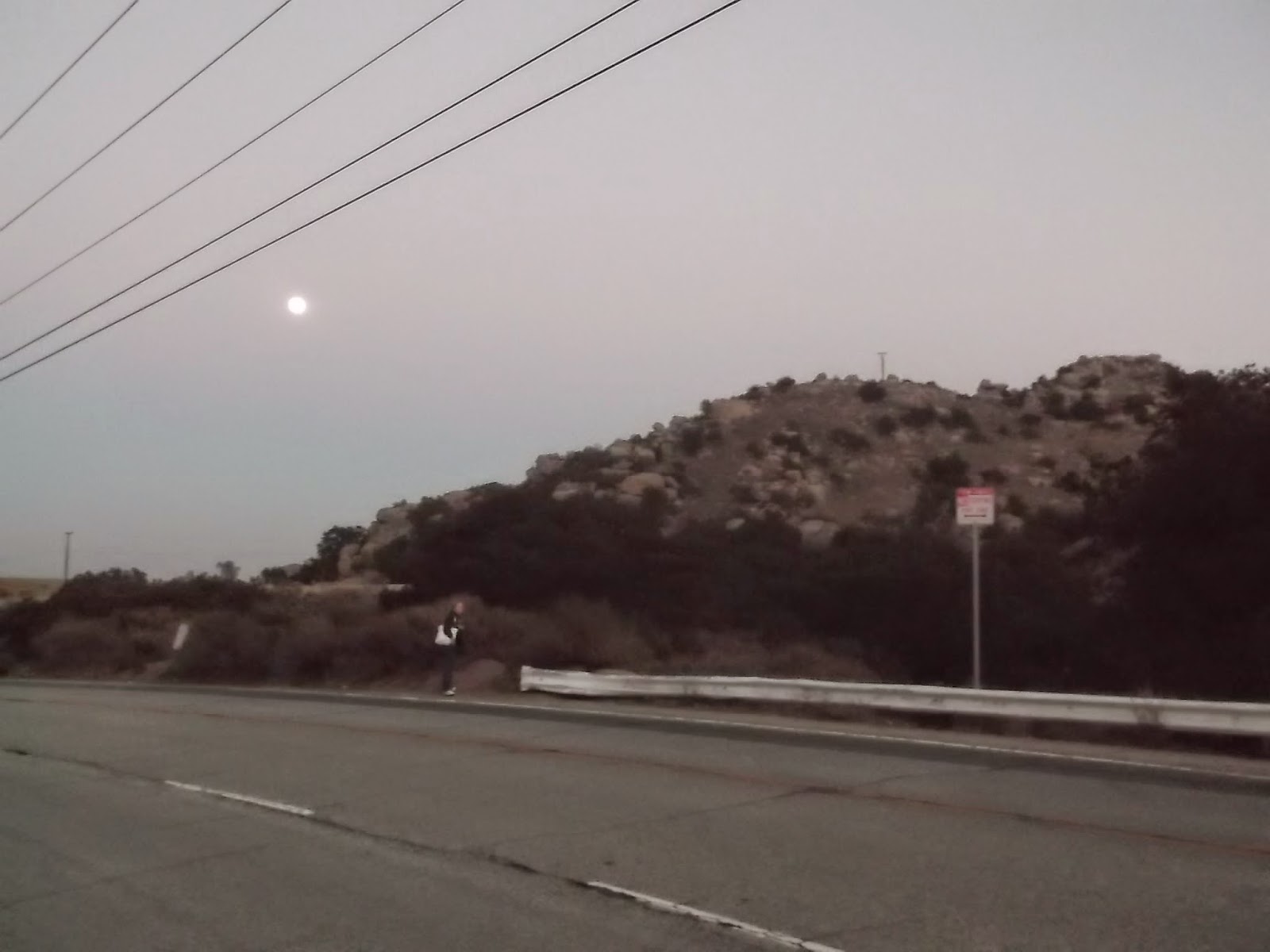 At the cave, they set up Patty's laptop and streamed her copy of Robert Hendrickson's "Inside the Manson Gang" in the very same place that it was filmed. 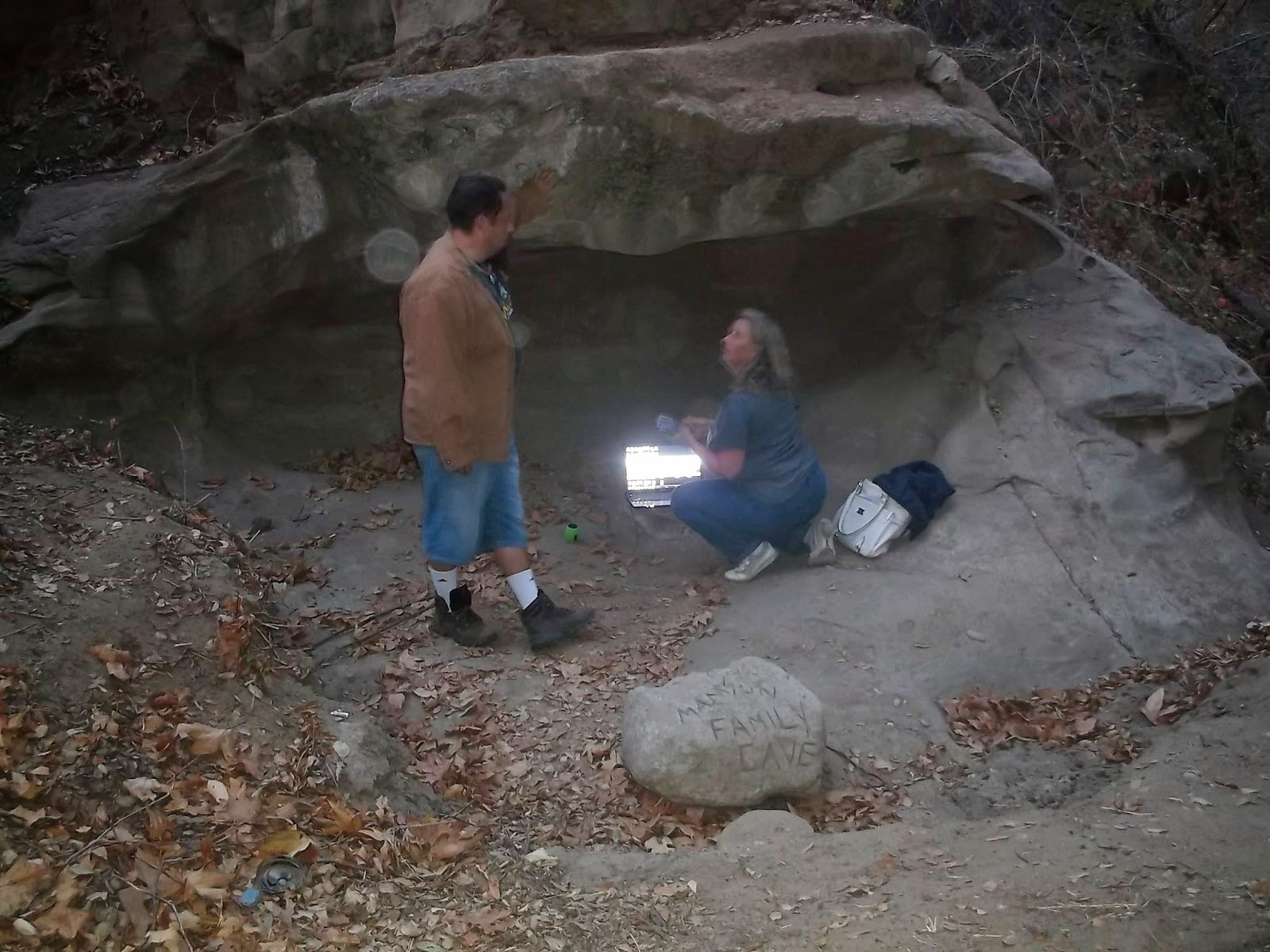 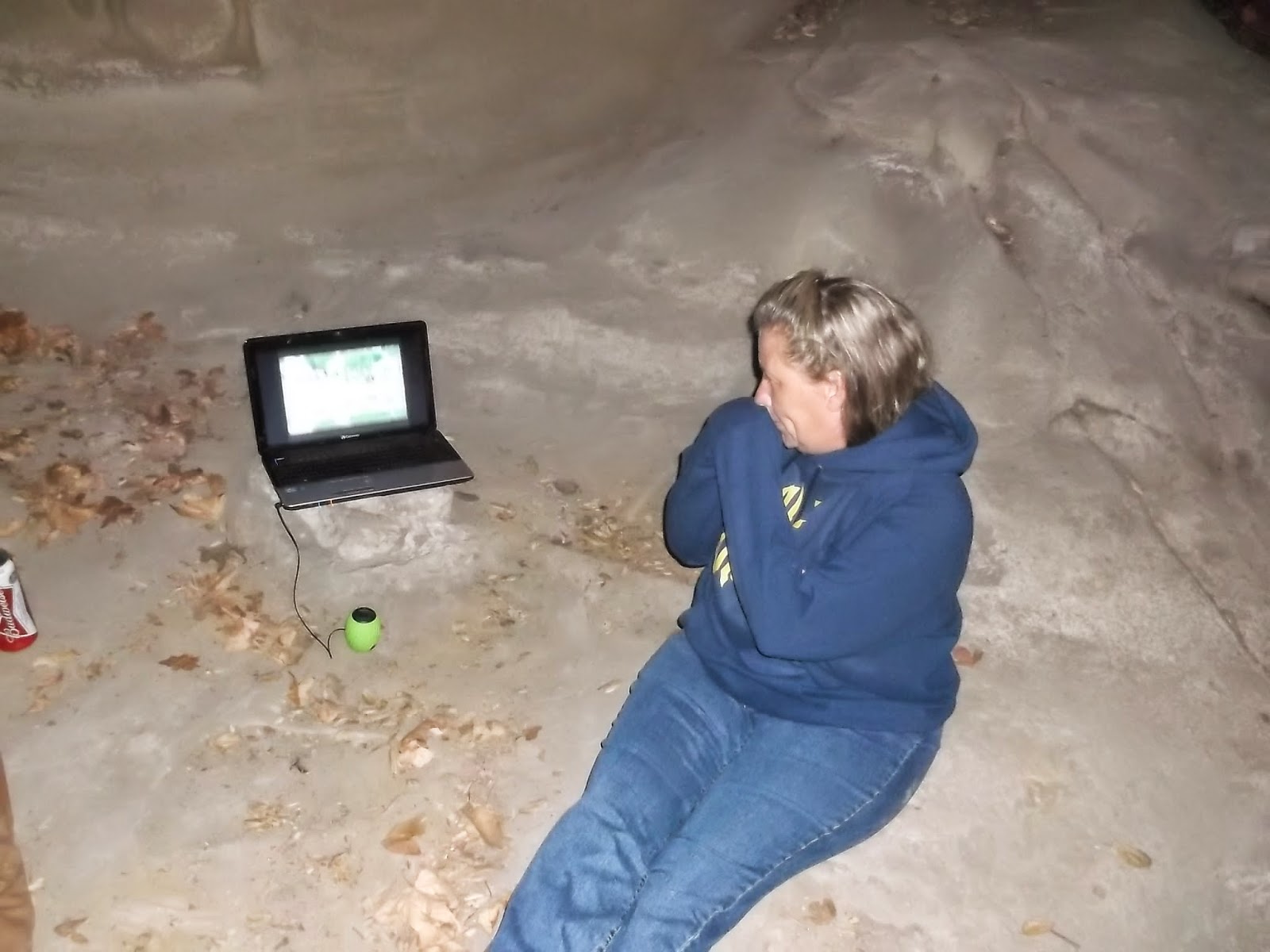 At one point in the film, a helicopter flies over the ranch and the girls scramble for the bushes. Patty kids you not: ten minutes later, a helicopter flew overhead with its spotlights on and for a brief terrifying moment, Patty and Stoner thought the jig was up! As Patty's heart came up her esophagus into her mouth, she looked around for somewhere, anywhere to hide. Alas, she's not as adept at it as Red and Blue were and had to pretend she was a rock.

So that's it folks, it was a great time, but now it's time for Patty to go back to where she came from. It's been fun: hope you enjoyed it at least a fraction as much as Patty did. Thank you Stoner, you're a great host!

It's a lot more overgrown now than it was during Manson's time there, by the look of things. Is that property part of the park, Patty? Isn't there a resident psycho that rides around on a four wheeler, running people off?

These photos are amazing, Patty, thank you for sharing them!

Patty,
Reenacting some of the things the killers did sounds like a great advemture. If you ever go back to Cielo Drive, you should throw your clothes out the window on the way home. :-)

Think of this: At the time 1969, IF someone said: In 2014 someone will have a small machine, that sits in your lap, that will play the MANSON movie right where it was filmed, you would probably say: "Oh, and your'e crazy like the Manson Family too."

BUT if you look at today's NEWS (Cops beating and KILLING young and old) right on the public streets, you might even think: Gee - what's new in the "Law and Order" busines - after 45 years ?

Then imagine this: It's the 50th Anniversary of the Tate/LaBianca Massacre and at dusk hundreds of people are gathering at the Spahn Ranch State Park for an outdoor public screening of "Inside the MANSON Gang."

Think the cops will let that happen PEACEFULLY ?

As long as we pay a hefty permit fee first, right?

Ann, there is a guy that lives there and rides around on an ATV. We didn't see him this time though we did in May: Patty actually waved and said good morning to the sourpuss. She is told that the next day, Stoner and Michael Channels were at the ranch when a police car drove up.The cop said to Michael, "Do you know a Stoner?" Michael said, "Why, you got some weed?"

AustinAnn, the part where the cave is is on state park land. And yeah, the guy (and a woman) stopped on the hill on the back ranch (which is private) and stared at us. We just laughed and waved at them.

What was your dream about?! Your posts from the L.A. visit have been great, & the pictures awesome.

Reenacting some of the things the killers did sounds like a great advemture.

no no no
It was a memorial, not a celebration. It wasn't tacky, evil or tasteless AT ALL!

Dude. Its history. If We dontdon't remember it we are doomed to repeat it. You are many things but Patty never took you for obtuse

You know Trilby, Patty doesn't really remember the dream now but it had something to do with a monster at the front door

Matt- while I don't know what you are talking about (vagina?) I am happy that we are fighting again. I would challenge you to a battle of wits but I do not fight unarmed men.

Patty Obtuse and a thief but a liar never. In 1969 I was 7. What are you up to, besides celebrating murders?

Maybe people should understand.. Manson didnt order anyone to be killed, people should care about charles manson the human being.

Colonel, your favorite Wikipedia says otherwise, and Patty asked you specifically how much older you were than she at El Coyote two years ago. She thought that you were older, but you said no. So, which is it? PS These are love taps not punches...

Wikipedia? Excuse me while I laugh uncontrollably on the way to dinner.

OK Pattyculpa, you must know how old you are if you made it as far as you have. The vagina thing...remember the surgical mesh thing? We found a photo, you did more research, then posted about her spontaneous orgasms? Patty is cooking dinner, it takes time. One per centers who go to dinner every night are probably not aware of this startling fact.

Mr H, I remember clearly being taught by teachers as a 5th grader that the same computer on apollo 11 would eventually be on every desk.

Also Mr H: did you know the original 1969 videos of apollo 11 were lost? Cool your film survives!

Patty, he may be way older than he even says, he's using the same lines over and over like my 85 y.o. father-in-law...

I don't understand buying property as famous as Spahn ranch, then getting annoyed that people tresspass. What did they expect, bird watchers only? I am glad the place hasn't been developed, yet, but someday it might disappear into a CVS & Walgreens, condos, apartment complexes, or hideous tract housing. I hope not, though.

In 1967 for my college "speech" class I predicted that the "transplanting" of internal body parts would eventually become "Big $$$ Business." My professor said MY "speech' deserved an "A", BUT that I was "crazy" stupid for thinking such a new "thing" would end up like every other money making capitalist enterprise.

So I did another "speech" on the REAL John F. Kennedy. Of course most Americans didn't know that HE was very "conservative" UNTIL HE realized there was gold in them thar BLACK votes. This time my Pro-Communist professor, in front of the class, lambasted ME to no end for "speaking" the TRUTH - in such an elequent manner.

MY fifth grade teacher was a strict "asshole" BUT one-summer vacation HE knocked on our front door and SOLD my parents a set of World Book encyclopedias. They really couldn't afford it, BUT it changed my life FOREVER. At the time, 1955 it was like being the only kid with a computer full of information.

ANN: Now ask yourself, WHY would George sell-off ANY of his beloved ranch ?

AND why didn't MANSON "purchase" any of it from him ?

Cause "Manson" wanted to go to Death Valley and MISS seeing the the cities go up in flames ??????

it was great ...no movie theatre can make you feel that freaked out ...the frogs,the crickets every crunch of the leaves on the ground...next year it will be better..im starting a tradtion ''movie night'' at the ranch ..LMAO!!!!

Dang...you were freaked out too? It didn't show...thanks again, Mr. Van Houten!